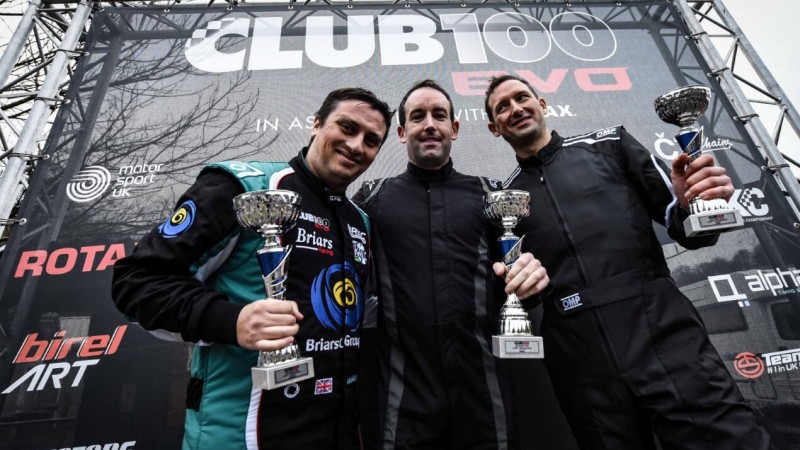 After the huge success of the SP60 series last year, it was great to see the popularity increase with a full 35 kart grid for the opening race of the new season. There were a few small tweaks to the rules, including a slightly adjusted weight limit.

Geoff Saunderson switched from the lightweight class, whereas Mike Philippou went the other way and moved back to lights, having switched after two races last year. Tarik Almou had also shed a few pounds and is no longer a super heavyweight. He was pretty rapid last year and often ran at the front. He could be the man to watch this year. It was great to see the return of an old face in the form of Phil Ingram. Let’s hope he makes a few more appearances this year.

Qualifying saw Stuart Martin claim pole position ahead of Anwar Beroual-Smith. Phil Ingram proved he’d lost none of his speed by lining up third on the grid. Tarik Almou joined him on the outside of row two and row three comprised Tim Clark and Geoff Saunderson.

The field completed the first lap in grid order with Martin leading Beroual-Smith from Ingram, Almou, Clark and Saunderson. Ingram’s rustinnes showed and he dropped two places on lap two but he was soon back in front.

Wayne Lidgbird was making good progress. After a good start, he was up to sixth by lap four at the expense of Geoff Saunderson.

Richard Newton led the super heavies and had a good lead over Damien Holmes. He in turn held a good gap over the battling Stuart Kirk, Alex Pritchard and Richard Allen. Kirk lost out to these two early on.

The race was stopped on lap five due to a heavy accident. Fortunately there were no serious injuries and there was a full race restart and a reduced twenty minute race.

At the restart, Ingram got the jump on Beroual-Smith to take second. Stuart Martin once again led the field but Ingram was all over the back of him. Tim Clark took third place from Beroual-Smith.

Tarik Almou and Geoff Saunderson resumed their battle for fifth place, with Tim Hill also getting in on the action. This trio were already starting to build a gap over Myles Sharman

Lap ten and Clark led from Beroual-Smith, Almou, Ingram, Stuart Martin, and Saunderson. Tim Hill had fallen back from this group and was fending off an attack by Wayne Lidgbird. The latter got past on lap 14.

In the midfield, there was a good battle going on for super heavy honours. Richard Allen had worked his way past Newton (who still had a penalty hanging over his helmet) and Alex Pritchard, who had recovered well after his penalty in practice.

Further down the order there were some notable battles going on. Steve Lindley, Ben Cottle, Carl Bannister, Nimva Oparvar, Stuart Osborne and Damien Holmes were having a close dice. The train of karts in the midfield was extremely close. Again, credit to the parity in Club100 Racing.

By lap twenty the top three had broken away from the pack. Clark was still leading by nearly a second from Beroual-Smith. Tarik Almou was third and only a couple of tenths behind second place. Stuart Martin was over a second behind this group and still had Phil Ingram breathing down his neck. There was another second back to Lidgbird and Saundetrson – both had got past Hill by this stage of the race.

Lap 21 and Almou dived down the inside of Beroual-Smith to take second place. He immediately set after Clark and got the gap down to half a second, setting purple sectors as he went. It was sadly too little, too late and he had to settle for second behind Clark. The top three were separated by just over two tenths of a second. Of course Almou’s penalty relegated him to seventh place, leaving Stuart Martin to pick up third. Pritchard took the super heavy win followed by Richard Allen and Richard Newton.

Clark made good use of his pole to lead Anwar Beroual-Smith round the opening lap. Martin maintained third but Phil Ingram lost two places to Lidgbird and Almou. Lidgbird took Almou for third with a good move on lap two while Ingram continued to slip back.

Richard Allen was out in front in the super heavy class. He dispatched Tim Hill for seventh overall on lap three as he pulled away from his main rivals. Alex Pritchard was second in class and Richard Newton third.

The running order remained largely unchanged at the front for the first few laps. Clark continued to lead Beroual-Smith, Lidgbird and Almou. Saunderson was up to fifth ahead of Stuart Martin but a gap was already beginning to emerge between him and the leading quartet.

Once again the midfield provided some interesting battles. Phil Ingram was down in twelfth and leading a gaggle of karts which included Ben Cottle, Alex Pritchard, George Hatto, Matt Morgan and Carl Bannister.

There was a change at the front on lap seven. Smith made a move on Clark and took the lead. This put Clark on the defensive from Almou.

Tim Clark lost second to Almou on lap thirteen and dropped a further place behind Lidgbird the following lap. There was more action ahead when Tarik Almou took the lead on lap sixteen. His winter weight loss programme obviously paying dividends. Lidgbird took Beroual-Smith for second position two laps later and this put him under pressure from Tim Clark.

Richard Allen continued to lead the super heavy class. By half distance he had a huge lead over second placed Pritchard. Newton was still third, albeit three seconds behind Pritchard. Damien Holmes was fourth and Peter Gillett, Chris Solomon, Stuart Kirk and Matthew Perrott made up the rest of the runners.

Back with the leaders and lap 21 saw Lidgbird pull off a good move to take the lead from Almou. The latter was having none of it and re-passed him the following lap. This gave Beroual-Smith and Clark the opportunity to get within striking distance again.

Saunderson was having a bit of a lonely race in fifth. He was over a second behind the top four and over five seconds clear of Ingram. The battle in front did allow him to close the gap slightly but he didn’t seem to quite have the pace to pose a threat.

Over the next few laps things settled down at the front. Almou gradually extended his lead over Lidgbird who, in turn, seemed safe from Beroual-Smith. It was much the same in the super heavies. Despite a track limit warning, Richard Allen had seven karts between himself and Pritchard. The rest of the super heavies were evenly spread out.

Over the last few laps, Almou extended his lead to over three seconds. In the end it was quite a comfortable win. There was more action behind as Lidgbird took both Clark and Beroual-Smith for second on the last lap. Beroual-Smith narrowly beat Clark to take third. The super heavyweight win was dominated by Richard Allen. Alex Pritchrd was second and Damien Holmes managed to take third place.

Tim Clark took the overall victory. Beroual-Smith was a very close second and Tarik Almou claimed the last spot on the podium. It was an easy victory for Richard Allen in the super heavyweights but a great second place for Alex Pritchard and third overall went to Damien Holmes. 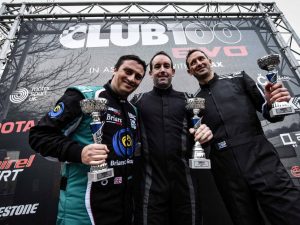