Qualifying Ben Benneyworth stopped the clock with a 43.805 on his second flying lap in Group 1 but a lap later it was ace qualifier Tim Hill who posted a 43.799. No one bettered it. Lennie Wood was third quickest followed by Martin Gurnett who then suffered exclusion for being underweight sending him to the back of the grid for the pre B Final. Miguel Hall and Jordan Salter completed the top five with Salter the fastest SHW. 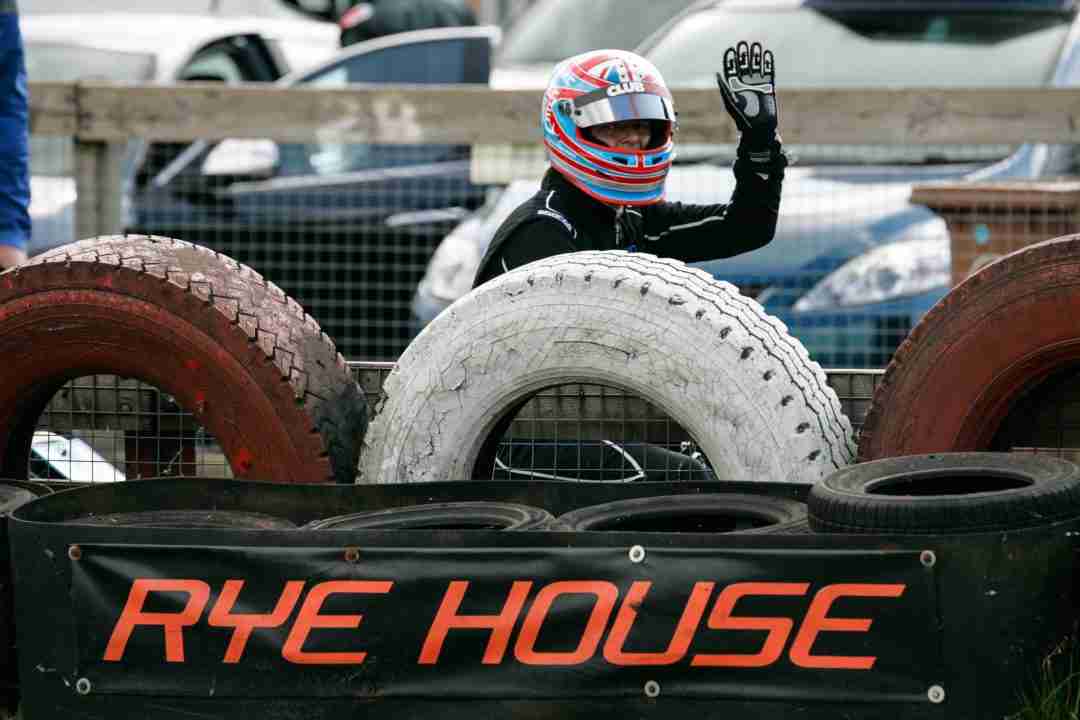 A quicker Group 2. Interestingly the front runners all set their times early on with Steve Bosley heading the group on his first flying lap. His time of 43.675 would be good enough for overall pole. Seb Algieri was next followed by Championship leader Nick Trafford and Aaron Stevens. Stuart Jones completed the top five with Paul Goddard the fastest SHW runner. HW/SHW Pre B Final Two SHW’s on the front row. Paul Goddard and the EssexFlatPack Championship leader Trevor Randall alongside. Andrew Cherry and Nima Oparvar on row two from SHW Paul Williams and Roger Mullen on three. Goddard led the field away and by the end of the first lap he was almost a second clear of second placed Randall. Cherry spun out on the opening lap to promote Williams into third with Kieran Chidgzey fourth, up from grid eight. Mullen was next and a lap later was into fourth and the final qualifying spot but with Chidgzey keeping up the pressure. Oparvar held sixth with Chris Scivier next. At the front Goddard and Randall continued to pull clear of Williams in third. Goddard was driving particularly well, looking very calm and composed as he pulled himself several lengths clear of Randall. Mullen closed down Williams and took third with a few laps remaining. The top four looked to be safe enough in the four qualifying spots although Chidgzey in fifth was keeping Williams, in fourth, honest. With two to go Goddard looked to have the race won despite Randall closing in but Randall thought he had seen his number come up showing a penalty for cone abuse. It hadn’t. Worse, he thought that only two qualified for the A final and reasoned that he had to win or be penalised down to third. Into the hairpin he made a move down the inside. It was very late and it failed spinning both he and Goddard to a halt. Not very clever Trevor. Mullen took the win from Williams with Chidgzey and Oparvar the final qualifier. Post race it would have been no surprise to see Paul Goddard absolutely livid. Actually it would because Paul just isn’t like that. He was hugely disappointed of course but accepted Trevor’s apology with good grace. It was good to see and embodied the great sporting ethos of Club 100. HW/SHW Pre A Final Bosley on pole from Algieri with Hill and Benneyworth on row two. Wood and Trafford on three from Hall and Stevens with leading SHW Salter and Stuart Jones completing the first five rows. Down into the hairpin for the first time and everyone was playing nicely with Bosley still at the front. Hall though had had a great start and got ahead of Hill but as he turned into Pylon he dropped a wheel off the kerb and caught some water on his rear tyre. Devoid of grip he spun but forgot one of the first rules of Club 100, foot on the brake if you spin. He rolled back collecting the unfortunate Hill who had elected to go round the outside. Hall got going whilst Hill elected to retire. Bosley continued to lead but Algieri was pressing hard with Wood right behind and ready to capitalise on any errors. Benneyworth too was well in the hunt a few lengths up on Trafford and Stevens who was enjoying a really solid run ahead of Harrington. Algieri continued to press for the lead and at one third distance he was at the front with Wood following him by Bosley a couple of laps later. Two laps further and Bosley was down to fourth behind Benneyworth. Algieri continued to lead but Wood and Benneyworth were only a few lengths back. Wood feinted to pass a couple of times but was never quite close enough and Algieri held on for his first Club 100 win by just a couple of tenths from Wood and Benneyworth. Bosley hung on to fourth just a tenth up on Trafford whilst Harrington demoted Stevens to seventh on the last lap. Stevens did however have the satisfaction of fastest lap and is rapidly improving as a driver. SHW sponsor, and all round good guy, Stuart Germon was next and the leading SHW whilst Mullen came home ninth having started from grid twenty one after winning the Pre B Final. Mike Bodnar completed the top ten. 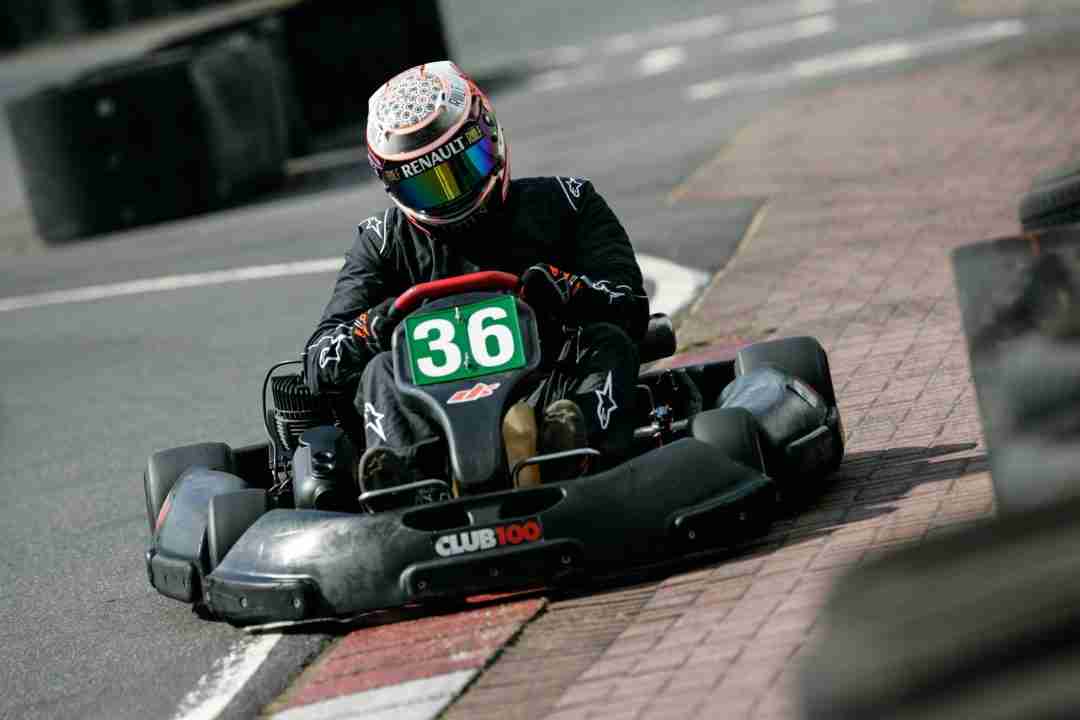 HW/SHW B Final SHW Pete Gillett on pole from Martin Gurnett with Jeremy Deeks and Chris Scivier on row two. Next up Kelly Rogers and Paul Goddard from Ben Johnson and Keith Evans and Synjen Hopkins and David Stirling occupying the fifth row. Just two to qualify for the A final. A good clean start saw the first four still in their respective grid places as the field crossed the line at the end of the first lap. Goddard was already on the move and into fourth by the end of lap two. With three laps run Gurnett was at the front and beginning to edge clear from Gillett and Deeks whilst Scivier fought back past Goddard who had picked up a penalty for cone abuse. And coming up to join the fun was Chris Blooman after starting on grid thirteen. Half distance and Gurnett was still running clear with Gillett second. Goddard was up to third having got by Scivier and Deeks in successive laps. Blooman was up to fourth but his great run was over a lap later as he spun out of contention. Goddard continued to reel in Gillett but he needed a win to qualify. On the penultimate lap he was into second and began to close in on the leader but there weren’t enough laps left so Gurnett took the win. A great performance too after starting at the back of the pre B Final. Goddard’s penalty saw him drop to third behind Gillett. But Paul was a happy man post race despite a luckless day. He showed proper pace and thoroughly enjoyed himself. Just what it’s all about. His day will come. 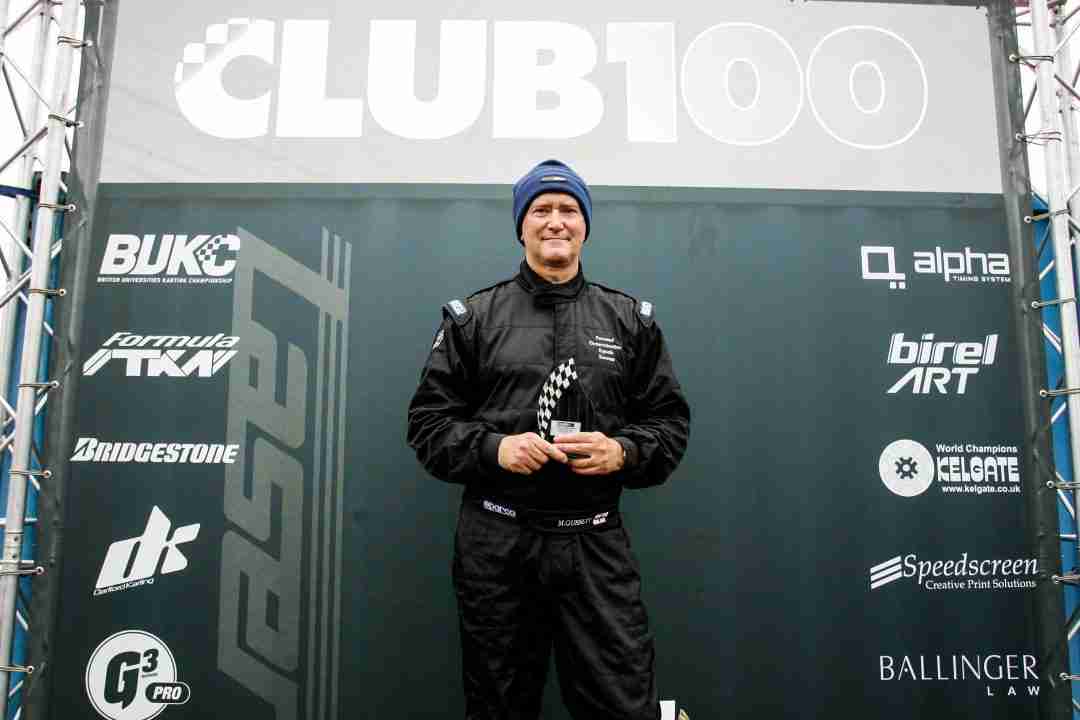 HW/SHW A Final Algieri on pole from Wood. Bennyworth and Bosley on two from Trafford and Harrington. Stevens and the first SHW Germon on four with Mullen and Bodnar rounding out the top ten. Algieri led the field away but Wood got shuffled back round the outside of the first corner and would end the lap in sixth. Benneyworth slotted into second with Trafford third and Stevens up to fourth ahead of Bosley. Bodnar was up to seventh with Mullen eighth ahead of Harrington and Craig Brown. Germon dropped down to thirteenth and second in the SHW division behind Paul Williams. For lap after lap the top ten remained in order but Algieri, Benneyworth and Trafford at the front were pulling clear of the rest of the pack headed by Stevens. Both Benneyworth and Trafford were trying all they knew to get by Algieri but the youngest driver in the Heavies was defending like his life depended on it. With four to go Bosley finally broke through Stevens defence to move into fourth but the front three were way too far up the road to be caught. Wood got by Stevens a lap later. But the race belonged to Seb Algieri. He crossed the line just a couple of tenths up on Benneyworth for an historic win after a very mature drive and one that doubtless had his mum shedding tears of joy at home. And well she might. A very proud moment. Benneyworth set the fastest lap of the race but just couldn’t find enough pace to grab the lead whilst Trafford’s third place means he’s been on the podium at every round this season. Bosley and Wood remained fourth and fifth with Stevens sixth, his best ever result, with Bodnar next. Brown, Harrington and Mullen completed the top ten. The EssexFlatPack honours went to Paul Williams, his first win in Super Heavies, with Kieran Chidgzey second from series sponsor Stuart Germon who would have been second but for a four place penalty. 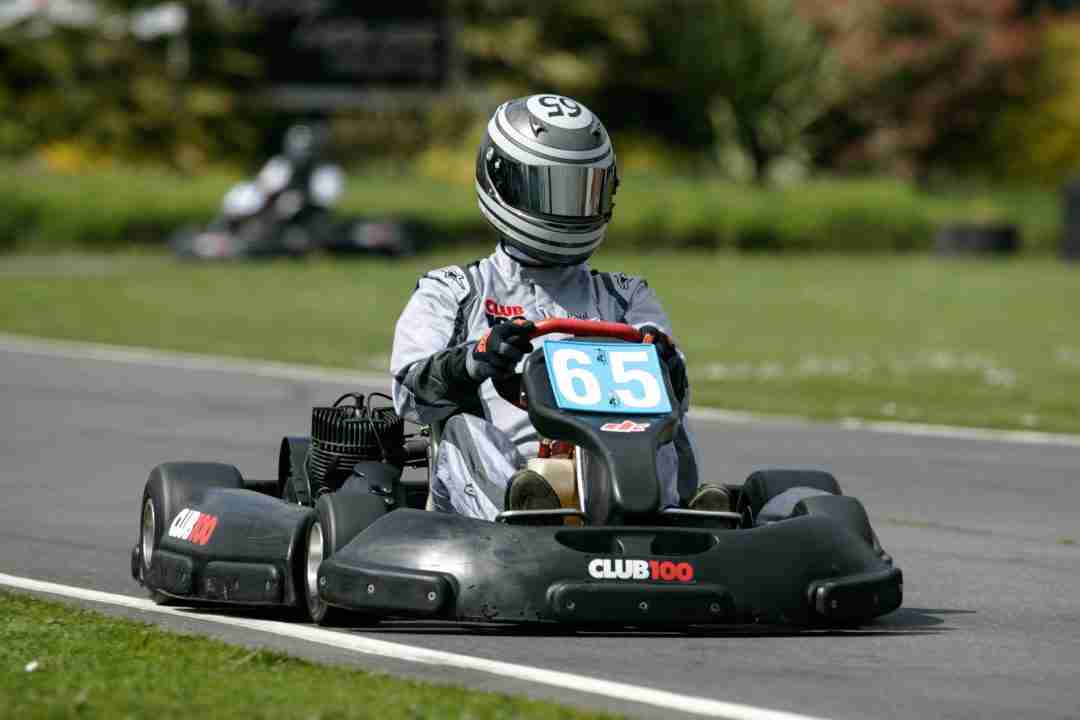 The Championships Nick Trafford remains at the top of the Heavyweight order with Ben Bennyworth second. Seb Algieri’s win sees him move up to third with Steve Bosley and Lennie Wood in fourth and fifth In the Super Heavyweights Sponsored By EssexFlatPack.co.uk Championship despite an awful day Trevor Randall remains in the lead with Paul Williams second from Stuart Germon. Jordan Salter is fourth from James Edwards. 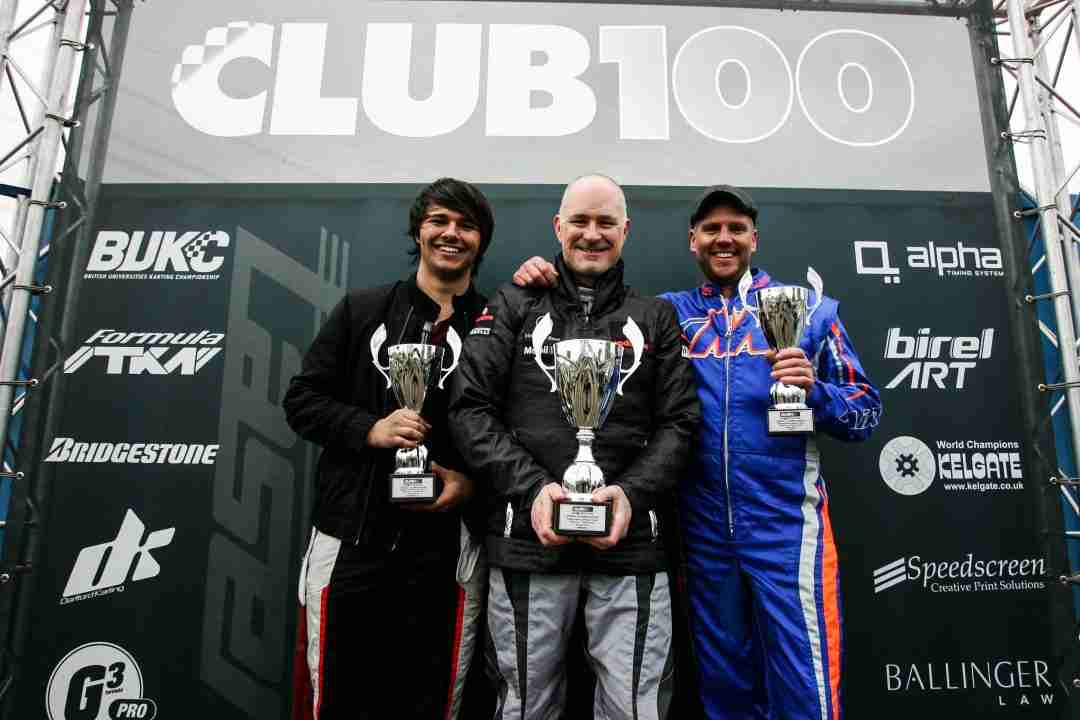 Reflections A day for a few firsts. A first Clubman’s win for Darrell Lowe. A first win in the Lights for James Venning. A first win for Seb Algieri in the Heavies and A first SHW win for Paul Williams. Great to see the joy spread around. Will it ever warm up? With a month to go before the next round at Shenington JV has promised that it will. So don’t forget your umbrellas. I confess that I was so cold at Rye that I didn’t spend as much time in the paddock as I would have liked instead opting for the relative warmth of race control. A very interesting experience listening to all the radio chatter and watching just how much work goes into making the days racing so successful. We saw some very good marshaling too at Rye. They were very alert and used the blue flags when necessary to good effect. A couple of points to note. It was a little disappointing to see several drivers throwing the front end of the Karts down when things hadn’t gone right. Don’t blame the karts. They are not at fault and should be loved and cherished. Also, let’s not forget the golden rule. When you spin off, get your foot on the brake. No one should need reminding of this. See you all at Shenny, the Club’s first visit for eleven years. It’s good to have a change!!
Scroll to Top
We use cookies to ensure that we give you the best experience on our website. If you continue to use this site we will assume that you are happy with it.OkPrivacy policy