When He Said He Was Quick He Meant It. Steve Bosley, Is A Championship Player…

Qualifying – Group 1 Ben Cottle topped the times in the first group but he left it very late setting the time on the penultimate lap to just edge out Anthony Harrington by 0.020. Tim Hill was next a mere 0.065 further back. A close fought group this with the top ten covered by less than half a second. Pete Gillet was the leading super heavy. 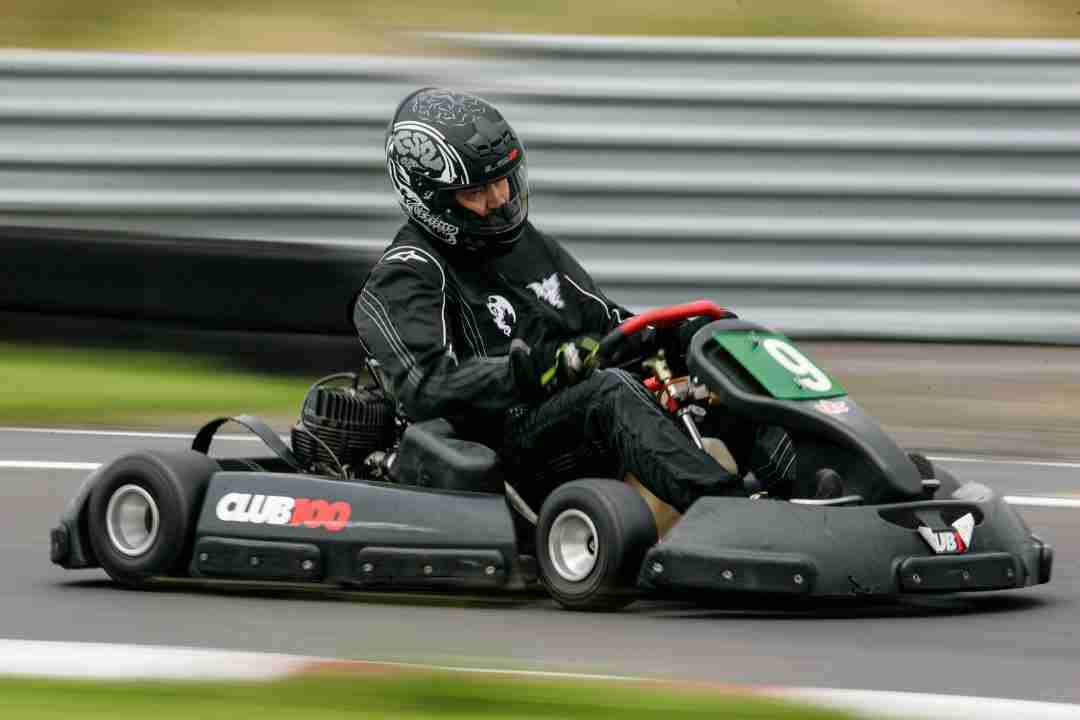 Group 2 A slightly slower group this with the top time being set relatively early by Gerard Moore, returning after a two year absence. Adam Wright was next up. He fought hard to topple Moore but finally had to settle for second best 0.063 adrift. Again it was close with the top ten again covered by less than half a second which all boded well for some close competitive racing. Howard Mitchell was the leading super heavy. Pre B Final Top four finishers to progress to the pre A Final and Adrian Brammer on pole from Jon Gooch and Adam Brown with Nick Trafford on row two. Row three occupied by Alexander Lammin and Craig Rankine followed by Jordan Salter and Andrew Dawson with David Storey and Daren Townsley completing the top ten. Brammer and Gooch got off to a great start but it was Dawson who really caught the eye moving rapidly forward and into third by the end of the lap followed by Brown and Trafford whilst Lammin got shuffled down the order to tenth. Townsley moved into sixth. With two run the order remained the same but Dawson was really flying and quickly closed down the front two. 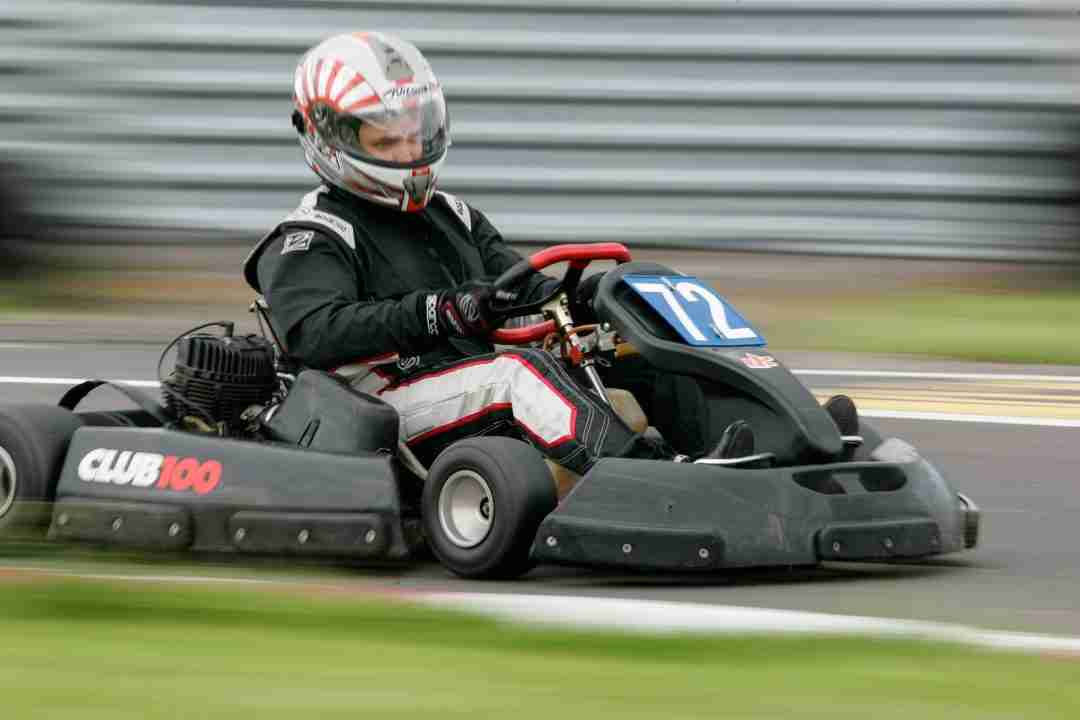 By the end of the third lap he was into the lead and thereafter began to pull away. He would eventually cross the line at the end almost eight seconds to the good and setting fastest lap along the way. Brammer continued to hold second from Gooch with Brown and Trafford next followed by Storey. Half distance and Brown slipped by Gooch for third. A lap later and Trafford and Storey were into fourth and fifth as Gooch continued to slip back. Brammer was coming under pressure from Brown and duly succumbed with three to go whilst Storey got ahead of Trafford for the final qualifying spot. But only for a lap as the latter moved back up. Brown crossed the line second with Brammer third whilst Trafford just held off Storey by 0.048 to take the final spot. After the race he looked absolutely shot, testament to just how hard a battle it had been. Pre A final Cottle led the pack away from pole whilst fellow front row sitter Harrington dropped behind a quick starting Hill. Also on the move was Wright starting from eighth he was up to fourth by the end of the first lap. Benneyworth, Ballinger and Moore all lost ground as Browning make progress up from tenth. Cottle was having to defend hard from the combative Hill whilst Harrington was getting his act back together and closing in on Hill. Wright remained fourth whilst Ballinger moved ahead of Benneyworth for fifth. Quarter distance and Cottle remained at the front but Harrington was now into second with Wright on his tail as Hill fell back to fourth. A lap later and it was all change at the front as Harrington moved inside Cottle at the Horseshoe. He quickly began to establish a small gap as the following three did battle over second. 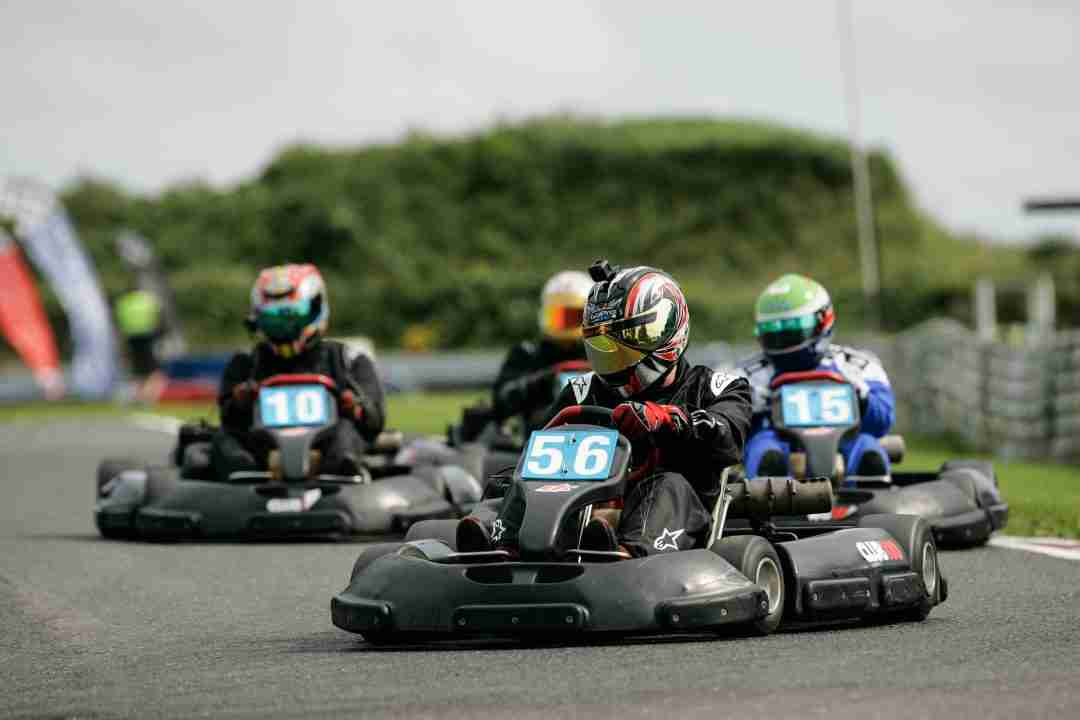 Hill got ahead of Wright as Cottle dropped to fourth. Hill’s second place lasted only a couple of laps before Wright moved back ahead. Harrington was a mere half a second up the road but Wright could not get on terms. So, Harrington took the win from Wright with Hill third. Browning took fourth and set fastest lap on the final tour with Cottle fifth from Ballinger whilst Moore was classified seventh after an eventful run at the expense of Gurnett who crossed the line seventh but penalised to eighth. Benneyworth and Bodnar completed the top ten. B Final Top two to qualify for the A final with the winner getting the B final trophy. Super Heavyweight Gillett on pole from Lammin with Turner and Edwards on row two. Gillett got away clean to lead with Lammin and Turner slotting into second and third. Gooch and Storey from the fourth row both made electrifying starts and were up to fourth and fifth demoting Edwards and Kelman to sixth and seventh whilst Rankine’s chances of a top spot disappeared as he spun to the back of the field. As the leaders streamed down into Billy’s for the second time Lammin made his move for the lead. As Gillett defended we suddenly had two karts, Gillett and Turner, spinning to halt. Storey avoided the mayhem whilst Gooch got delayed.

All this left Lammin in the lead pursued now by Storey with Edwards up to third from Kelman and Townsley who had made good progress up from grid eleven. Gooch was next up. Lammin and Storey continued at the front but Storey was intent on the lead. There were those who thought he should just settle down and be content with second as that was good enough for elevation to the main event. But there’s a trophy at stake and just after half distance he swept by into the lead. Lammin responded but couldn’t get the place back. So Storey took the win and the trophy with Lammin the second qualifier. Edwards gave valiant chase over the latter stages but had to be content with third from Townsley and Gooch just over a tenth behind but penalised six spots for his earlier misdemeanour. He did however have the satisfaction of fastest lap. A Final Browning badly needed a good result after his final lap debacle at Ellough and pole was a good starting point. Hill was alongside with Harrington and Wright on the second row. Cottle and Moore shared row three with Gurnett and Ballinger on four and Benneyworth and Bosley completing the top ten. Browning led the field away with Hill second from Wright, Harrington, Cottle and Moore. Hill was already in defensive mode and doing a very good job of it from Browning’s perspective as it allowed him a break. 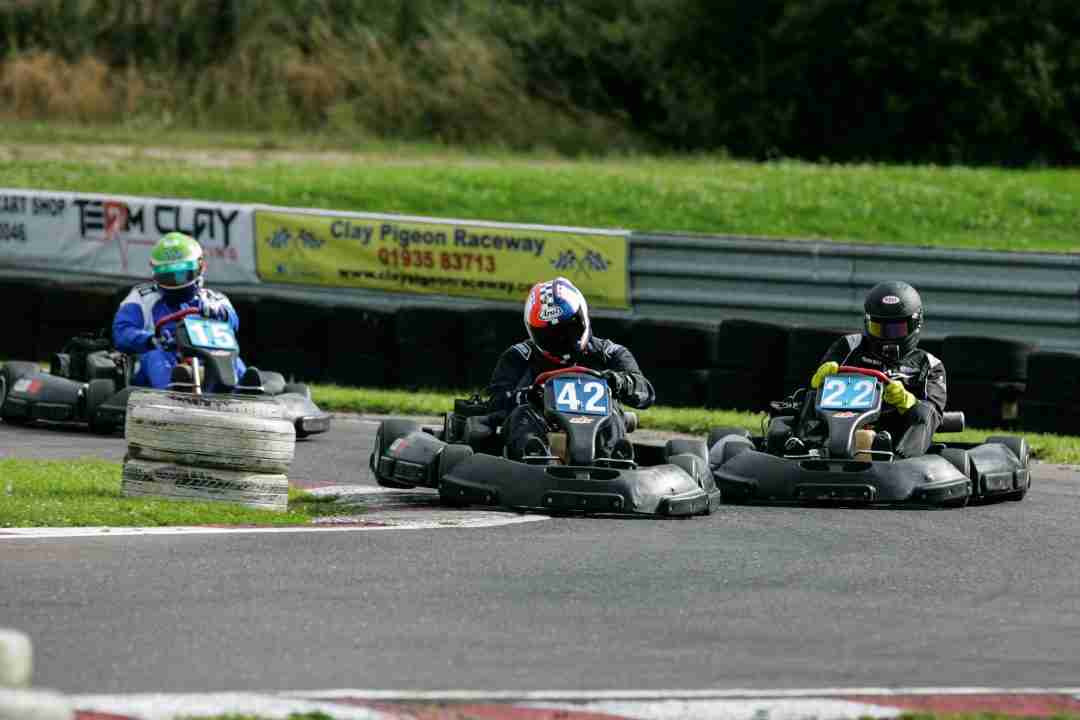 Hill would later be somewhat uncomplimentary of his kart’s power. He was soon defending third from Bosley who had made rapid progress up from the fifth row and was soon down to fourth. Browning continued to control the pace at the front from Wright and Bosley but as they came out of the hairpin before the Horseshoe for the eighth time yellow flags were being waved. The leader raised his hand but as he turned into the corner the pusher kart was in the centre of the track retrieving the errant kart. Browning struck it a glancing blow. Not hard but enough to unsettle him and Wright moved into the lead. Browning now had Bosley right with him but he soon gathered himself together and began to chase down the leader. Hill remained fourth and looked to be well clear of fifth placed Cowell who had fought his way up from grid eleven but was almost half the length of the finishing straight behind Hill. 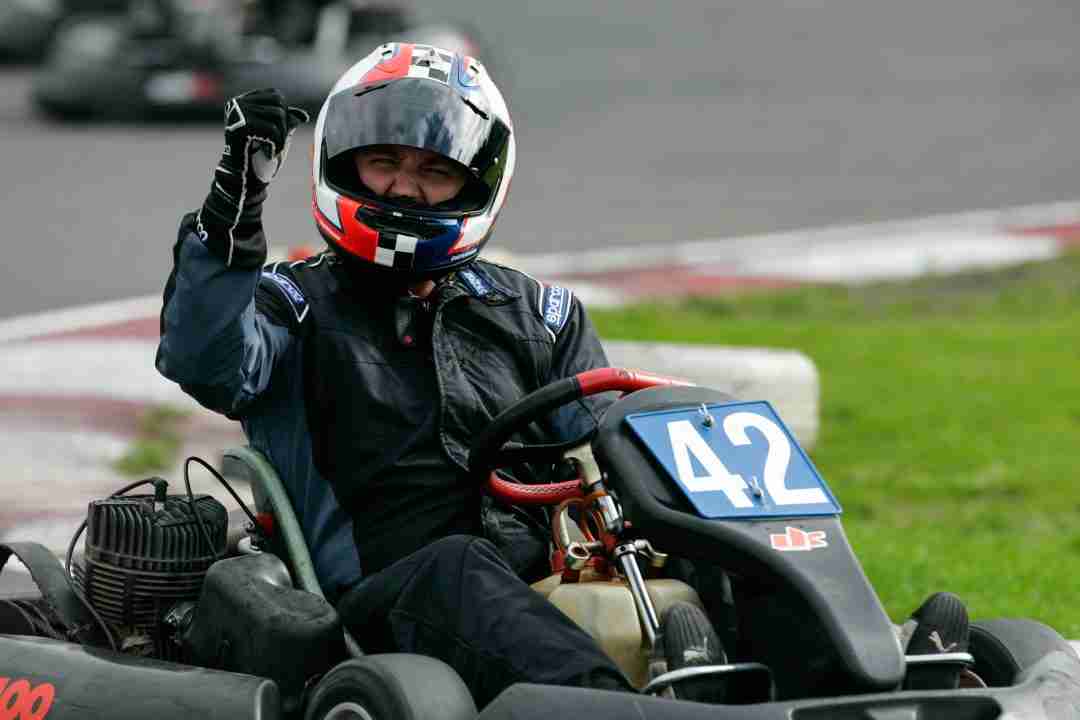 At the front Browning got back into the lead but only briefly as Bosley fought his way past. Meanwhile Cowell was reeling in Hill rapidly and despite Hill’s robust defence he could do nothing to prevent Cowell taking the place down into Billy’s. Bosley kept his composure as the leaders came upon the first backmarkers. Personally I felt some of the backmarkers failed to respond fairly to the blue flags and actually wanted to remain with the leaders and race them. Not how it should be. Bosley took the win from Browning who was happy with his points haul despite feeling that he could have won the race. Wright came home third and took the iZone Driver Performance award. Cowell took fourth equalling his best result for the season with Hill a disappointed fifth. Moore took sixth. A good result after a two year absence with Hobbs and Cottle next. Ellough winner Ridout was ninth after a subdued race with Dawson completing the top ten. Nick Trafford took the Super Heavyweight honours. 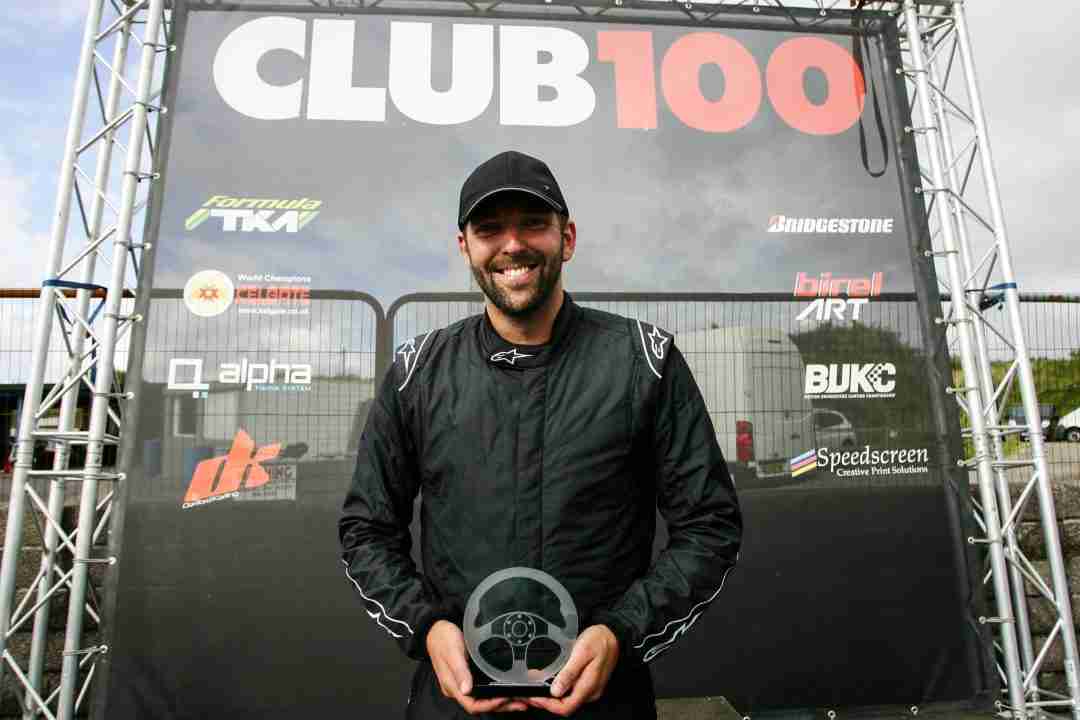 The Championship James Browning tops the table closely followed by Mark Ridout from Adam Wright, Anthony Harrington and Steve Bosley with Tim Hill not too far back in sixth. It’s a very hotly contested Championship this with some great battles throughout the field. 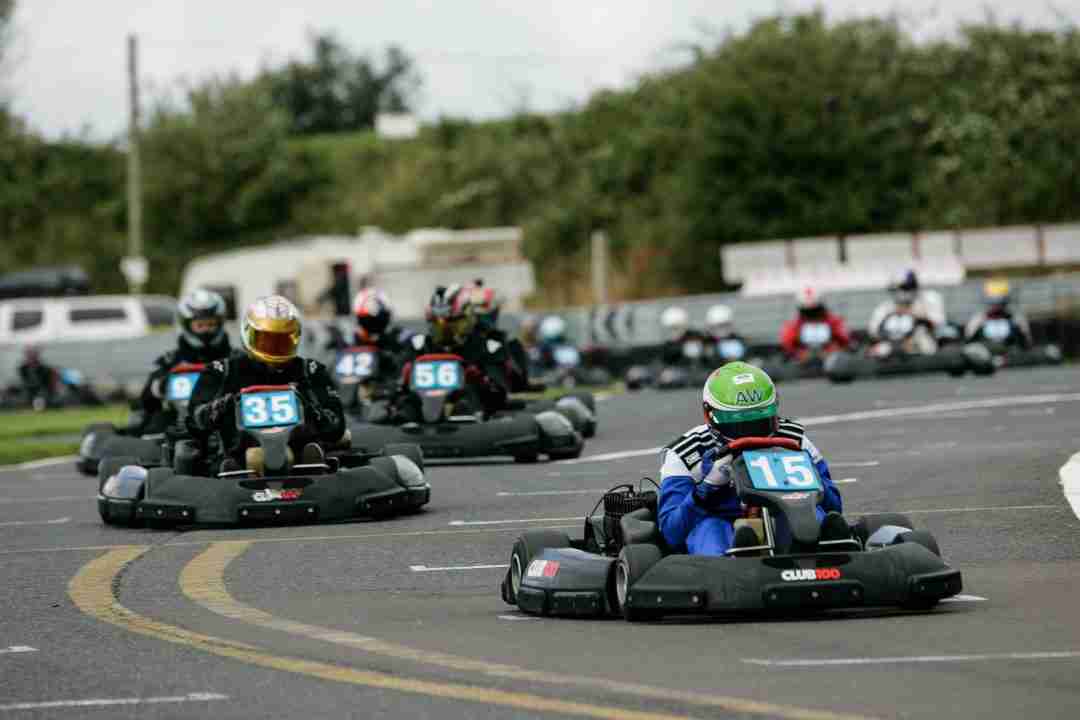 Reflections Another great days racing at Clay and fortunately, despite the forecast of rain it stayed dry. The only downside to the day was what I felt was a lack of respect shown by some of the backmarkers as the leaders came upon them. You know who you were and you should by now know the rules and indeed the etiquette. The Championships are really starting to warm up and its going to a great second half to the season. Roll on Lydd ! Photography: Jack Mitchell, JAM Motorsport Photography
Scroll to Top
We use cookies to ensure that we give you the best experience on our website. If you continue to use this site we will assume that you are happy with it.OkPrivacy policy