First out for the days racing the Elites and Clubman’s with the latter getting the first bite out of the tarmac. 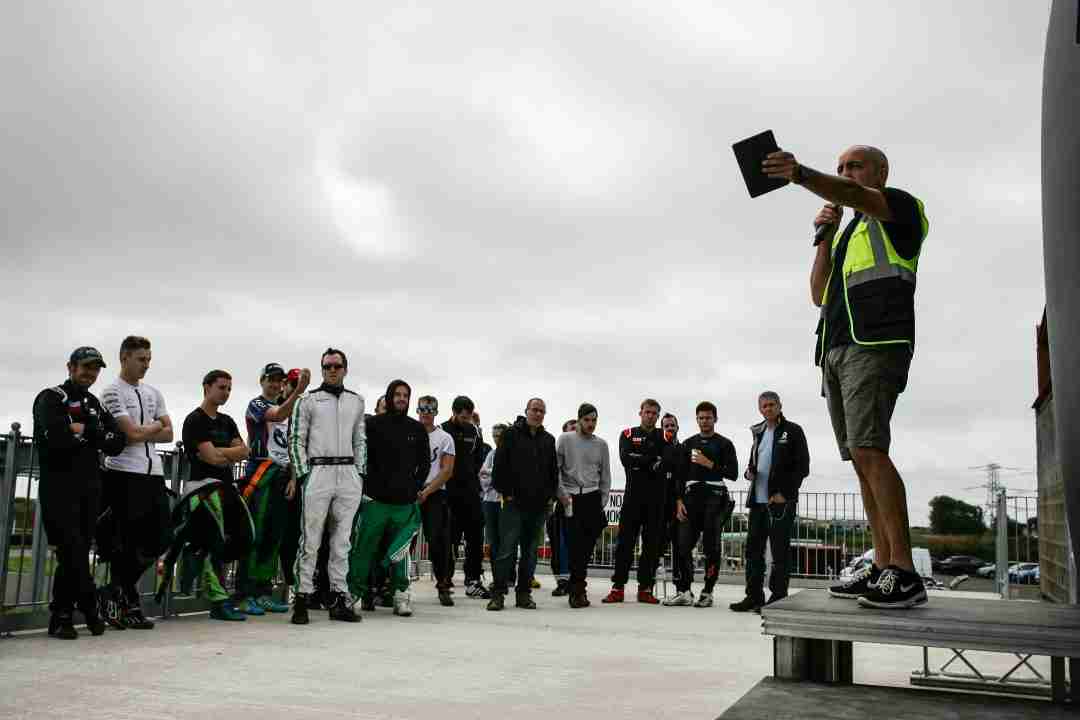 Heat 1 Jack Bolton on pole from Ian Blake with Steve Hicks and Jack Harding on row two. Daz Teal and Peter Harris shared row three from Rob Moore and Rob Newman, the leading Rookie racing for the first time at Lydd. Harry Neale and Chris Dixon completed the first five rows. From my vantage point on the new building just ahead of the start and finish line I thought Blake jumped the start but no penalty was called and he led into the first turn with Bolton behind from Harding and Hicks. Teal hung onto fifth whilst Moore went rapidly backwards. He would cross the line down in fourteenth by the end of the lap. Newman and Neale both made good starts climbing to sixth and seventh. Ed Barrs and Championship leader Joe Holmes both moved into the top ten whilst Jay Elliott, starting dead last, also made progress. 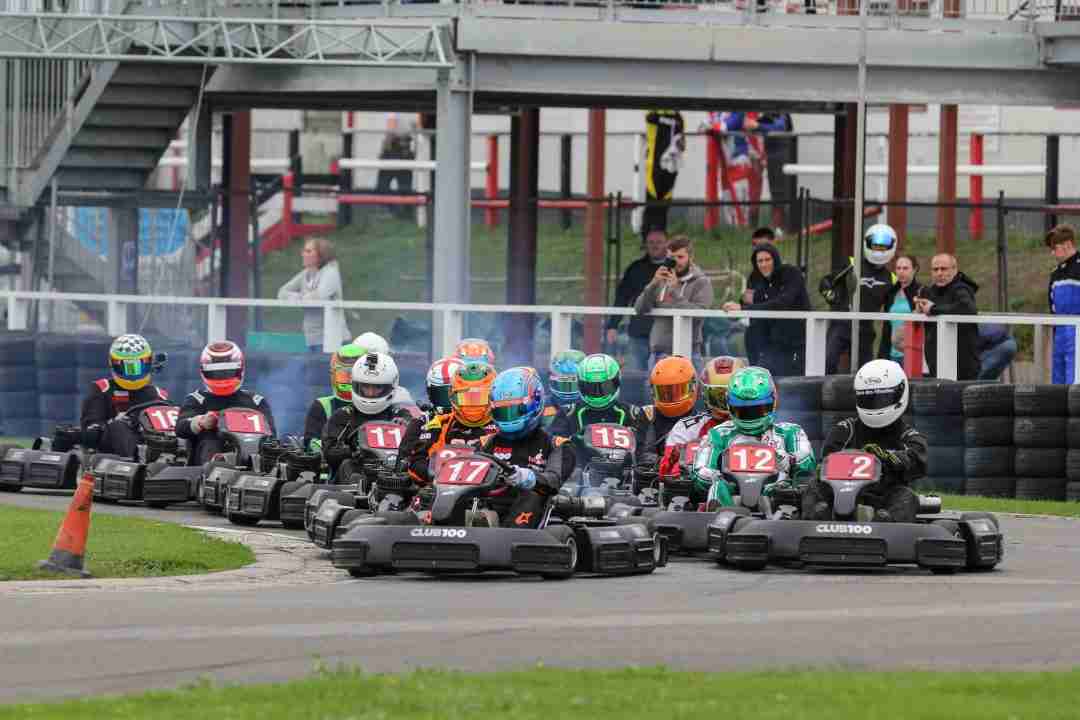 With two laps run Blake was already a second up on Harding and pulling away whilst Harding was in turn pulling clear of the chasing pack led by Bolton with Hicks in his wheel tracks. Newman was next having dispensed with Teal who dropped briefly back to seventh before fighting back past Neale. Blake continued to pull away at the front and looked to have the win in the bag but then the gap began to stabilise. Then it began to come down. Lap six and Harding cut the gap by just a tenth. Lap seven and he carved out over half a second as Blake recorded his slowest lap of the race. Penultimate lap and the leader set his second fastest lap but Harding went three tenths quicker and set the fastest lap of the race with a 44.065. Down the back straight for the final time and Blake looked to have the race won but Harding pulled out of the slip stream alongside the leader. Side by side they went round the final turns and headed to the line with Blake ahead by just 0.003. About half an inch. Sadly for Harding he’d clipped a cone and was demoted to third behind Bolton who crossed the line nigh on six seconds adrift, holding off Newman by just 0.061. Teal was next after a late race battle with Hicks which saw the two of them trade places several times. Unfortunately Hicks took a two place penalty for multiple contacts dropping him to eighth and promoting Harris and Neale to seventh and eighth. Elliott and Barrs completed the top ten. Heat 2 2017 Clubman’s Champion Harry Neale on pole from Chris Dixon with Ed Barrs and Pete O’Connor on row two. Joe Holmes and Dan Healey on three from Harrison Darvill and Jay Elliott on four. 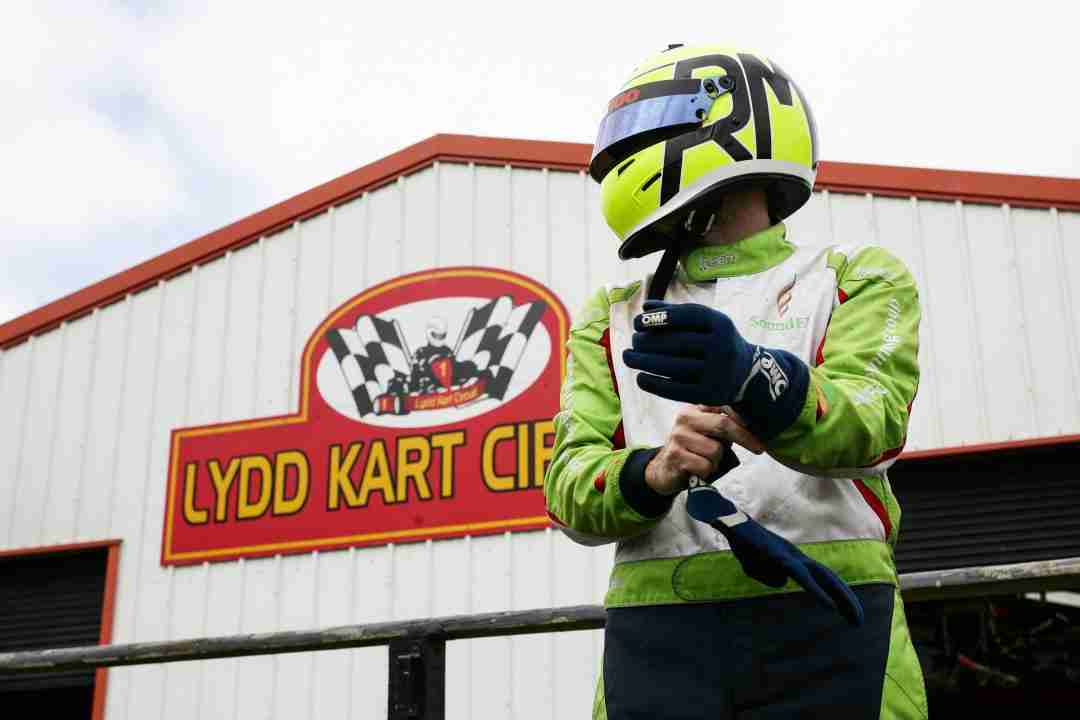 Jack Bolton and Ian Blake completed the first five rows. Neale made no mistake from pole to head the field round the first lap followed by Barrs and Dixon. Holmes was next having got the better of O’Connor at the start. Darvill got ahead of Healey but a lap later Healey was back into sixth. Neale continued to lead but Holmes was now into second from Dixon, Barrs, O’Connor, Healey, Elliott and Darvill. For several laps the order remained static but Holmes was really driving hard running wide a couple of times out of the last turn and incurring the wrath of the Clerk of the course. With three to go he blew past Neale on the back straight and into a lead he would never relinquish. But a two place deduction for exceeding track limits too often would drop him to third. It was a penalty he didn’t contest. Behind the front two was a great battle for third over the closing stages. 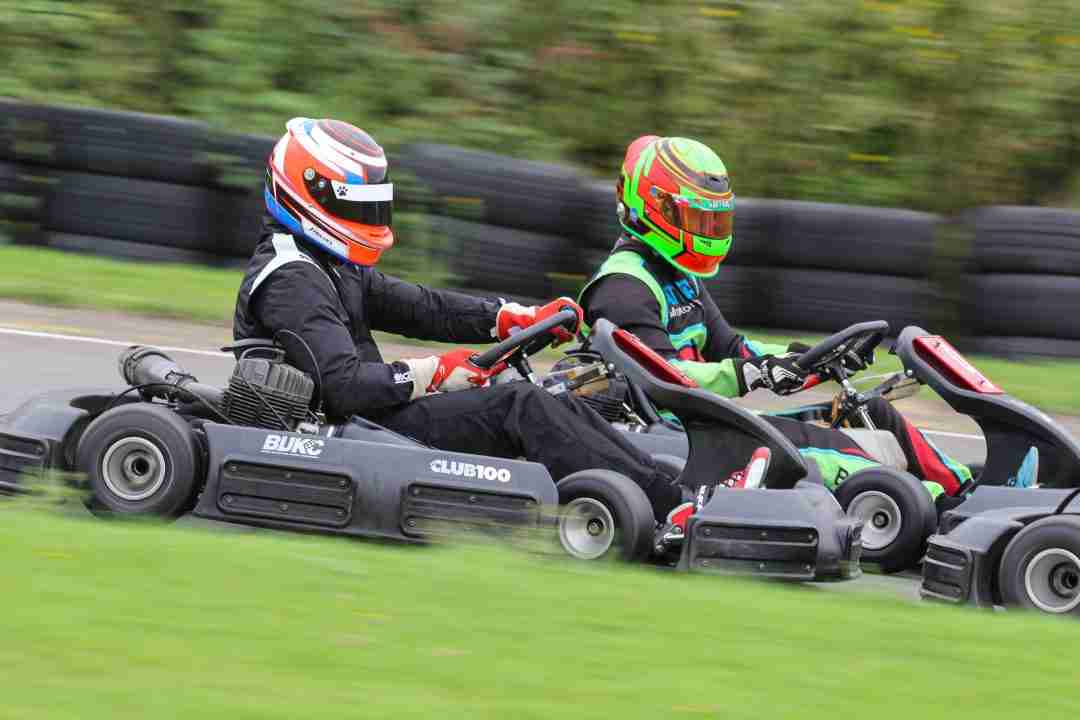 In the space of three laps Healey moved from sixth to third and over the final two laps he made serious inroads on the leaders. But there weren’t enough laps left although Holmes penalty did promote him to second behind Neale. Healey also set the fastest lap. Barrs came home fourth after a late race battle with Dixon and Elliott which saw the latter up to fourth at one stage before dropping back to sixth. O’Connor was next well clear of the remaining runners headed by Newman. Blake and Darvill completed the top ten. Heat 3 Newman on pole from Elliott with Moore and Darvill on row two. Harris and Healey shared row three from Teal and Holmes whilst Harding and O’Connor completed the first five rows. Newman led the pack away with Elliott having a look into the first turn but wisely backing out whilst Moore didn’t allow himself to be bullied and remained third, helped in part by Darvill getting out of shape in the first corner. Harris jumped into fourth from a fast starting Teal with Healey next from Holmes and Darvill. It would be a torrid race for Darvill who slipped to the rear of the field by half distance. 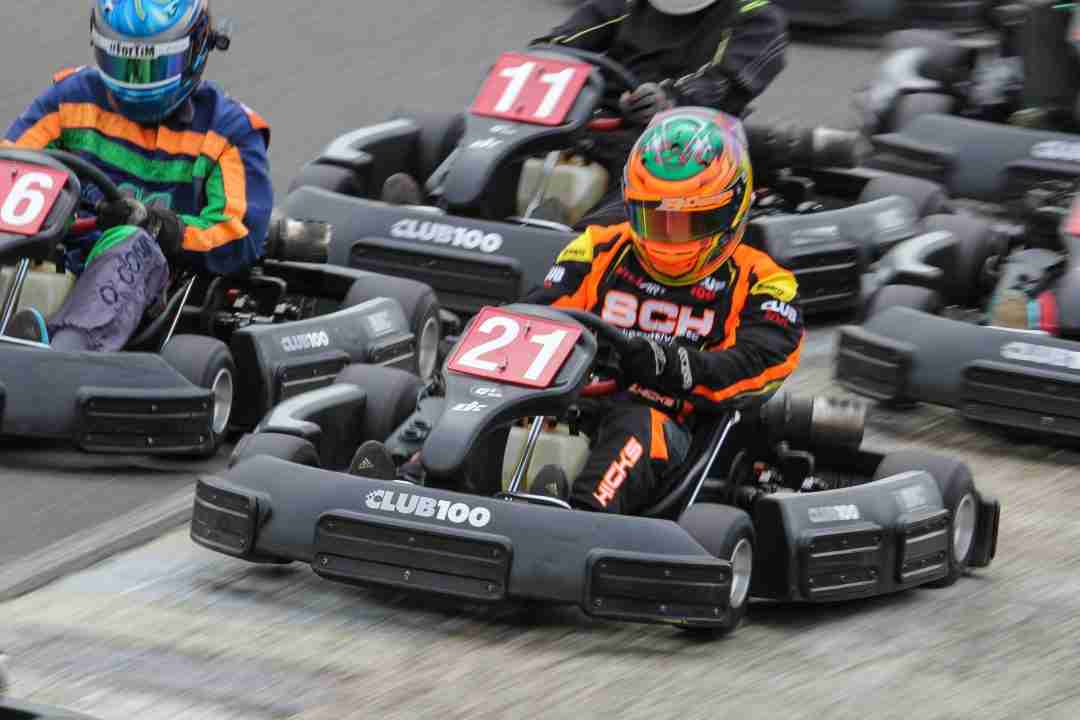 Newman continued to lead with Elliott a couple of lengths back. Moore remained in third and was looking comfortable despite falling away from the leaders. Harris was fourth with Teal fifth from a rapidly closing Holmes who had dispensed with Healey who now had Harding hunting him down just ahead of Blake. Whilst the order at the front remained static Holmes was putting pressure on Teal for fifth sweeping by at the end of the back straight and taking Healey through with him. Holmes immediately began to close in on Harris for fourth whilst Healey fended off the attention of Teal. Newman and Elliott were in a race of their own at the front with Moore still third. Holmes though was up to fourth and closing in on third whilst Harris now had to defend from Healey and Teal. At the far end of the circuit Healey tried to get inside Harris but Harris defended and got hit by Healey for his troubles, spinning to a halt. Healey was adjudged the aggressor and would be excluded from the results. Unfortunately the incident caused an angry exchange of views in the pit lane between the two drivers. It was heat of the moment stuff but not pleasant to witness for anyone within ear shot. This is a fun sport chaps. Take your issues away from the public gaze and talk it through like grown ups, preferably without the use of foul language. And if you’ve been judged the aggressor then don’t try to defend the indefensible. Take the penalty and move on. Sadly, the outcome of this exchange saw Harris withdraw from the rest of the meeting. Final Rob Newman’s eighty point haul gave him pole ahead of Harry Neale, Ian Blake and Jay Elliott who had all amassed seventy six points. It was Neale who would join Newman on the front row though, his win and faster lap time giving him the place over Blake with Elliott fourth on the grid. Joe Holmes and Daz Teal shared row three with Ed Barrs and Jack Bolton occupying row three from Pete O’Connor and Rob Moore on row five. 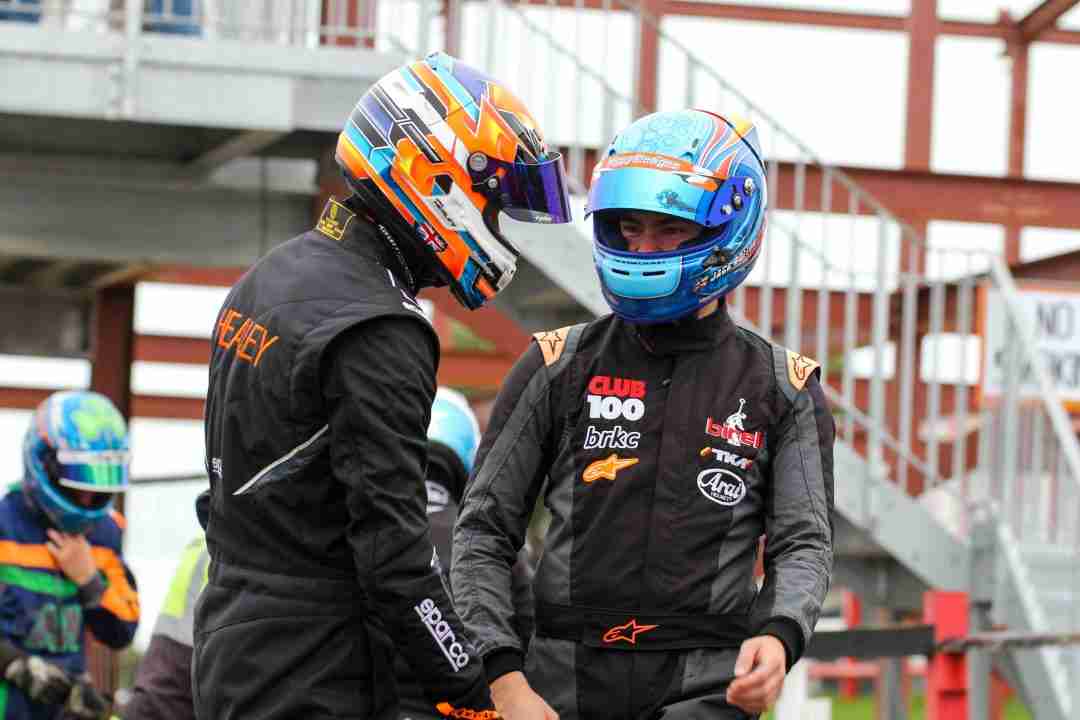 Newman led the pack away but Neale lost out badly through the first turn. It was a pretty aggressive start from those behind the leaders but no penalties ensued. As the leader crossed the line at the end of the lap he was already three tenths clear of Blake with Holmes up to third ahead of Elliott. Teal was next from Barrs and Bolton with the unfortunate Neale down to eighth. Newman continued to lead with the gap stabilised at around three tenths. Blake in second though was being pressed hard by Holmes and he duly took over in second with four laps run. Elliott remained fourth from Barrs whilst just adrift of the front runners a great battle was raging over sixth between Teal, Neale, Bolton and Steve Hicks. At the front Newman upped his pace setting the fastest lap of the race sixth time around. But if he thought he was going to break Holmes spirit he was going to be sadly mistaken. Holmes immediately cut the gap but only by a tenth. Then he did it again. And again. But Newman again upped his pace and Holmes knew the game was up. 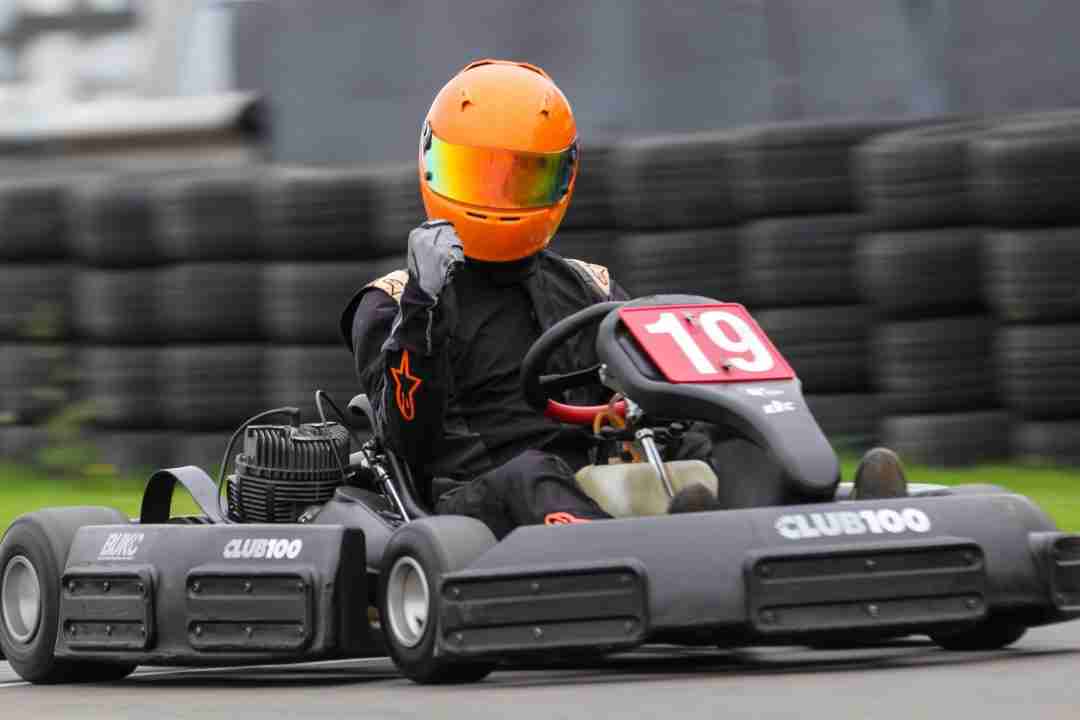 Newman took the flag by just over half a second with Holmes next for a Yorkshire one two. Blake finished a relatively lonely third a couple of seconds adrift but still well clear of Elliott in fourth whilst Barrs took Fifth. Hicks took sixth after a typically feisty drive up from grid twelve. Neale claimed seventh and second Rookie behind race winner Newman with Teal eighth from Moore. Bolton completed the top ten. Round up Joe Holmes second place sees him still retain a healthy lead in the Championship but if Rob Newman can keep replicating his Lydd form then I reckon he will give Joe a real run for his money. It was Rob’s first ever visit to Lydd too. Ian Blake remains third. A win surely can’t be far away for the ever cheerful ‘’Blakey’’. Jay Elliott was on good form again at Lydd but not quite on the pace of the front runners. Don’t discount him yet though. Steve Brown was absent again at Lydd but remains fifth in the standings. 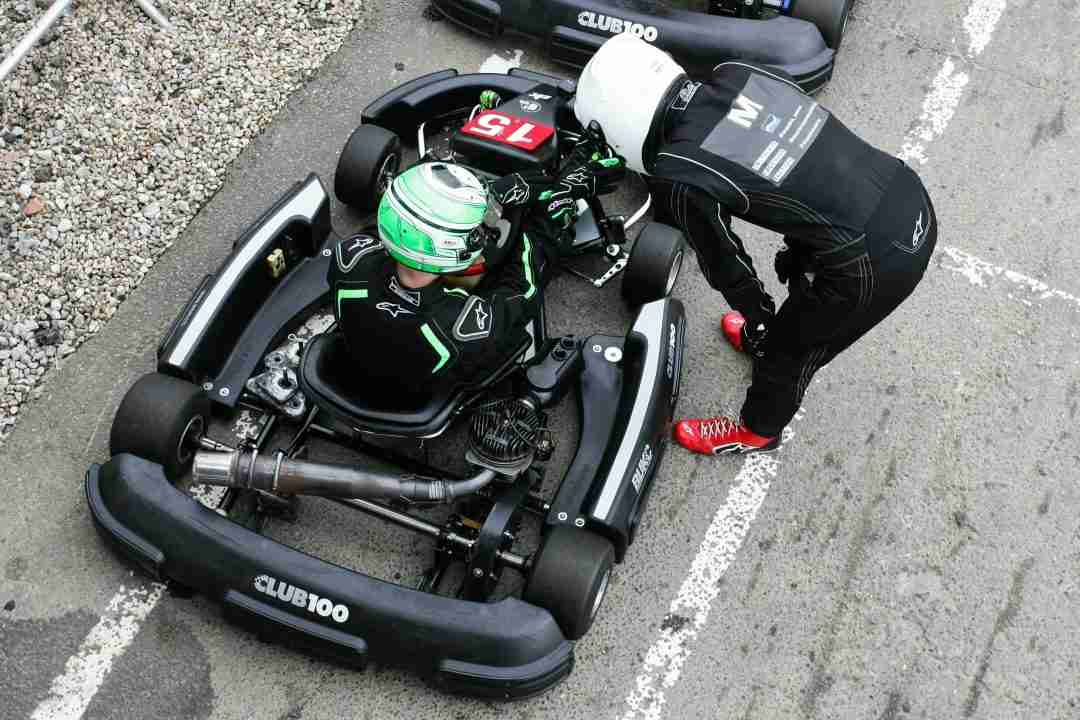 Reflections Another great days racing at Lydd. Yet again however there were several instances of drivers not heeding yellow flags. The rule is simple. When you see a yellow, raise your arm and back off. To not do so could have dangerous consequences not just for drivers but for the officials as well. I witnessed this on the approach into the first turn. It’s a quick corner and from a kart you have no idea what’s round it. And we still saw drivers weaving ferociously before the start. It actually caused a delay as a couple of drivers couldn’t get through quick enough to take up their grid positions. It’s in the regulations and one day the rule might just get applied. There was also a suggestion that a driver was adjusting the jets on his machines carb. And it appears to have some merit as it wasn’t just one driver complaining. It’s against the rules and the spirit of the Club and is something which is going to be watched for at the next round. You have been warned. 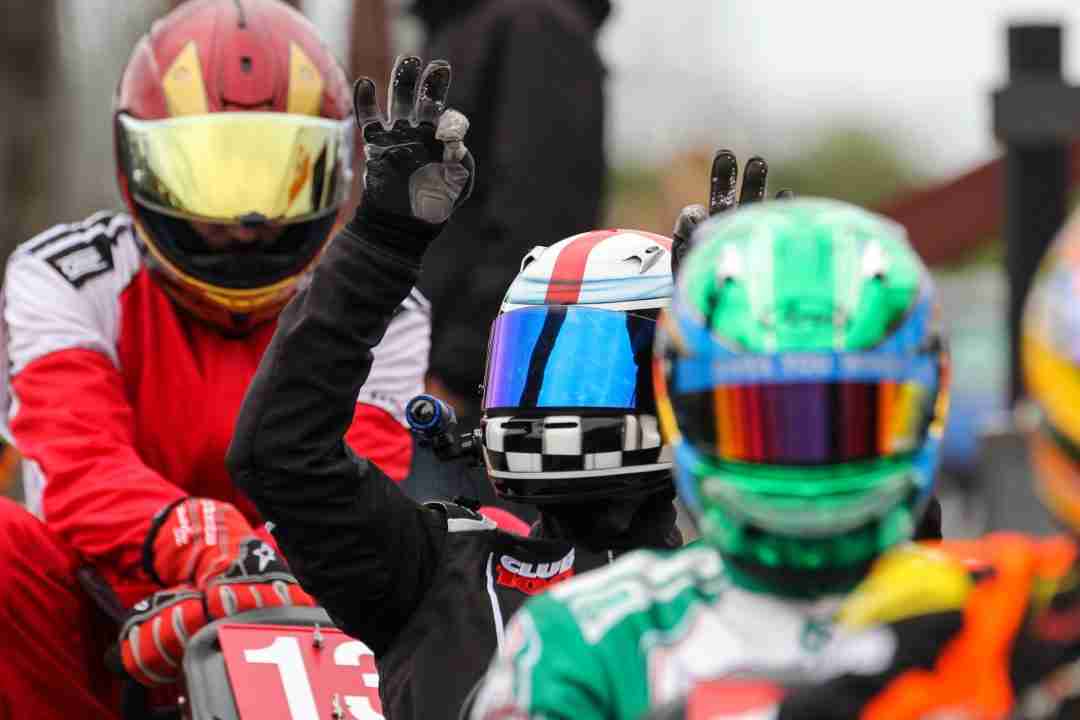