Lydd is a difficult circuit for a lot of drivers to get to at the best of times. The odd location of the circuit being basically a swamp in the arse end of Kent means a long drive for many. The frankly moronic decision by some pen pushing, bow tie wearing councillor to commission major roadworks on the main road to the UK’s busiest ferry terminal during the summer holidays, resulting in an inadequately signposted diversion around the aforementioned arse end of Kent, meant an even more difficult journey for many drivers. Disclaimer: The views and opinions of the race reporter are his own and do not reflect the views of Club100 or any of its staff.

So with that little rant out of the way it was time for racing. Aston Racing lined up on pole position. A great performance by Keen as Mustard saw them line up on the outside of row one. Clunge and CKS Throatpunchers made up row two, Conman and Runtime Exception were on row three, and Auditing Armageddon and JRG were on row four. A couple of notable teams – Pixel Pirates and Ballinger Law – found themselves right at the back in 24th and 25th respectively.

The pole sitters maintained their lead into the first chicane and managed to hold it for the remainder of the opening lap. Keen As Mustard found themselves shoved back behind Clunge, Conman and Runtime Exception Racing. CKS Throatpunchers had a disastrous first lap and came round last in class. The leading quartet remained close for much of the opening stint. Aston held the lead until lap 8 when they were passed by the rapid looking Cunge. Aston pitted on lap 14 and Clunge eight laps later. Once the first round of stops was completed, Clunge emerged in the lead. An early stop and some nifty work in the traffic saw Keen As Mustard back in the mix in second, just a fraction ahead of Aston Racing. Over the next stint, a decent battle emerged for second place. Runtime Exception Racing, Keen As Mustard and Conman swapped places a few times as they continued to chase the leaders. Auditing Armageddon were behind this group but a black flag would scupper their chances. Further back and it was JRG ahead of Pixel Pirates. Lucid Initiatives were having a solid run and Slickspeed and the recovering throatpunchers were next up. It wasn’t the best day for Ballinger Law as they were a couple of laps down having suffered from various issues. As the race approached the half distance mark, Aston Racing were back in the lead. Runtime Exception Racing were second and being chased down by Clunge. Conman, JRG and Slickspeed were some way further back but battling closely and in a good position to score a podium should something happen to any one of the leading three. That something happened to Runtime Exception Racing. Their charge was ended when they were shown the mechanical flag. This promoted Conman into third. Other than during the pit stops, Aston Racing continued to lead throughout the second half of the race. The field had started to spread out by this stage and Clunge were now a fair distance behind but well clear of Conman. It was much closer behind with only three seconds separating Sliskspeed from Conman and JRG only two seconds further back. Of course being the consummate professional I am, I completely missed what happened to Aston Racing (to be fair I was probably getting my racing gear on at the time). Anyway, I suspect either a black flag or a late race mechanical gremlin dropped them out of the lead and down to seventh. This handed the lead to a grateful Clunge who crossed the line nearly thirty seconds clear of second place JRG. Conman came home third, Keen As Mustard fourth and Slickspeed sixth.

A bit of a cockup with the results saw Keen As Mustard initially classified second and Sliskspeed third. This meant we had two podium ceremonies and I imagine left Keen As Mustard and Slickspeed feeling a bit deflated. In any case, a poor result for both Aston Racing and CKS Throatpunchers allowed JRG and Conman to close the gap in the title race. The saving grace for the top two was that Clunge effectively prevented their rivals from scoring more points. With only four rounds remaining, it’s still very open. And just to Slickspeed and Keen As Mustard don’t feel too bad. Here’s what might have been… 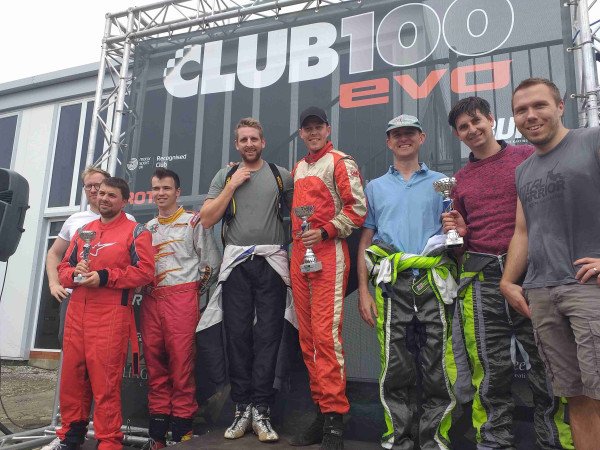