On The Brink – Joe Holmes Stops Rob Newman’s Charge. But It Goes To Buckmore…

First out for the morning session the Elites with Championship leader Joe Holmes desperate to put an end to his run of poor form to halt the advance of second placed Rob Newman who had been in majestic form over the previous three rounds. 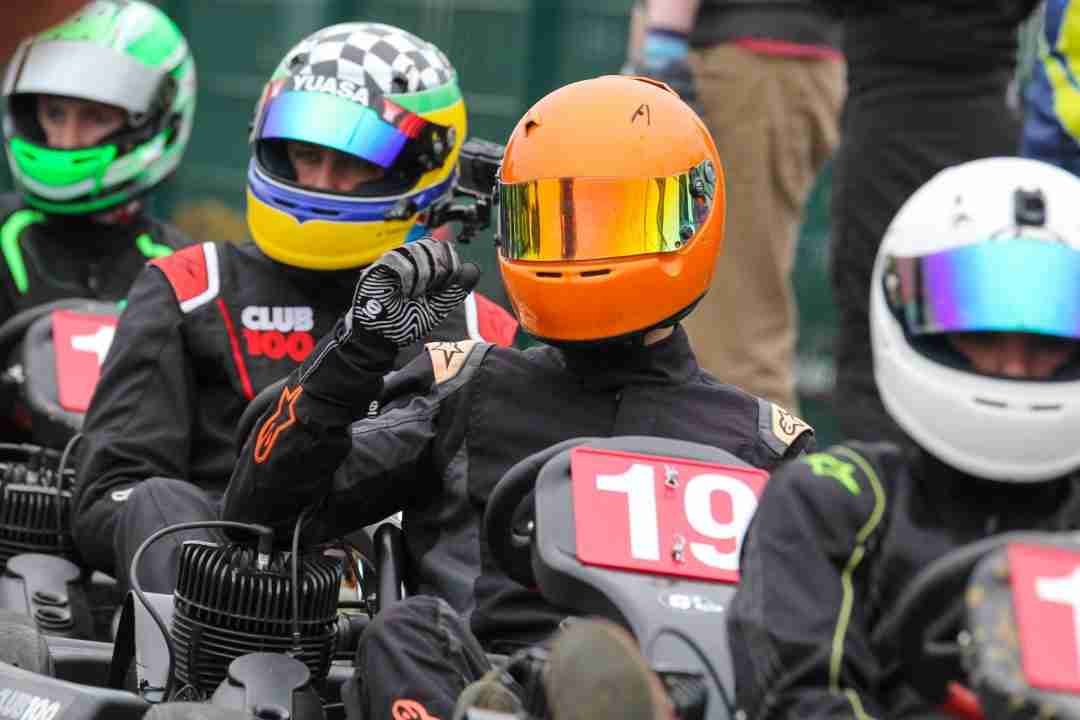 O plate runner Pete O’Connor on pole from David Longman with Jay Elliott and Tom Dix sharing row two. Ed Barrs and Chris Dixon on three from Holmes and Harry Neale on four and Dan Truman alongside Jack Bolton on row five. O’Connor survived the first corner jostling to lead the field up to Christmas with Elliott slotting into second ahead of Longman. Holmes was already on the move and into fourth by the end of the lap. And Newman had climbed to seventh. O’Connor continued to lead from Elliott but Holmes was up to fourth having battled his way past Longman at the top of the circuit. Third time around and Elliott dived down the inside of O’Connor into Ashby. O’Connor tried to hold on but both ran wide out of the corner allowing Holmes to take advantage and move into the lead. O’Connor ran across the grass and would be eighth by the end of the lap. Once at the front Holmes immediately began to stretch his advantage from Elliott who was holding off Longman. And Newman was still making progress. 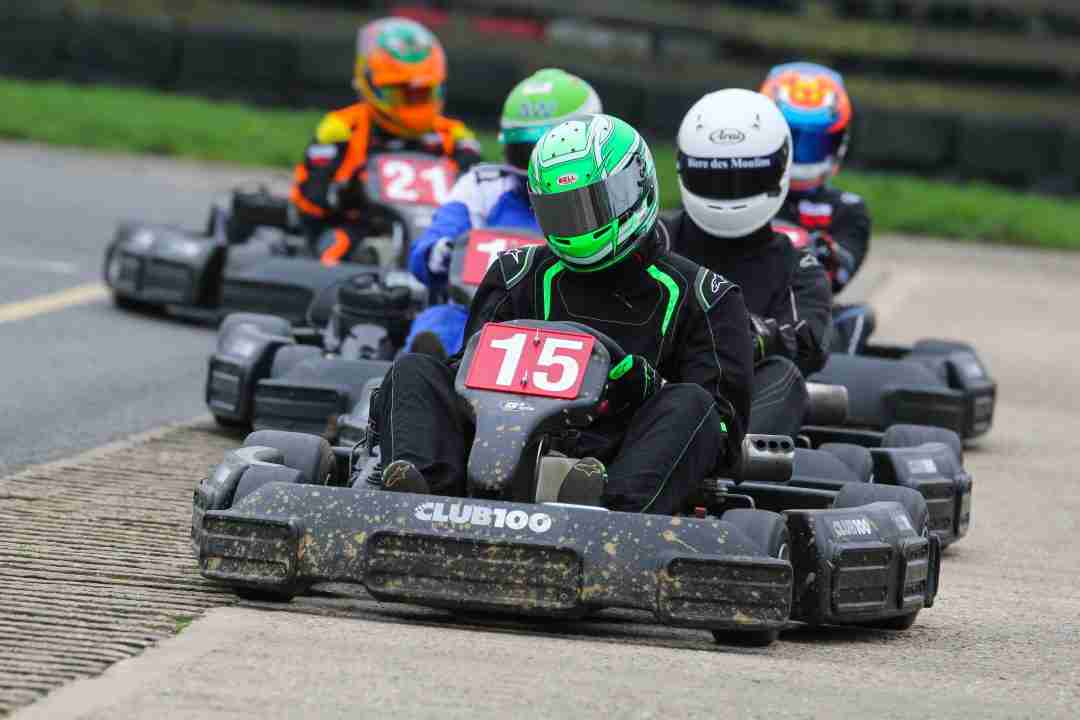 Fourth by half distance he soon picked off Longman at Ashby and set about closing the gap to Elliott. It didn’t take long and Elliott was powerless to resist as Newman swept by into second, again at Ashby. But could he catch the leader? He certainly gave it a go but Holmes responded setting the fastest lap of the race, and establishing a new record, on the penultimate tour. Elliott finished a comfortable third from Longman with O’Connor next across the line but penalised down to seventh for exceeding track limits promoting Barrs and Dix into fifth and sixth. Dan Healey was next after a fine, calculated drive up from grid fourteen with Bolton and Neale completing the top ten.

Newman on pole from Stephen Hicks with Ben Yarwood and Dan Healey on row two. Former Prem Champion Chris Powell was on three alongside Daz Teal. Great to see the former Champion and Hereford Raceway owner back in a Club 100 Kart. Konstantinos Kyritis shared row four with Rob Moore whilst Harrison Darvill and O’Connor completed the first five rows.
Newman brought the field up to the line and then chopped across Hicks bows to discourage any attempted overtake. It was hard but fair and he was away and into a lead he would never lose. Hicks remained second but was coming under pressure from Powell who made a move down the inside into Ashby. As Hicks was forced wide both Healey and Kyritsis saw an opportunity to gain places. It was a mighty scrap over the next couple of corners but Powell emerged in second with Hicks hanging on to third with Kyritsis fourth having demoted Healey to fifth. 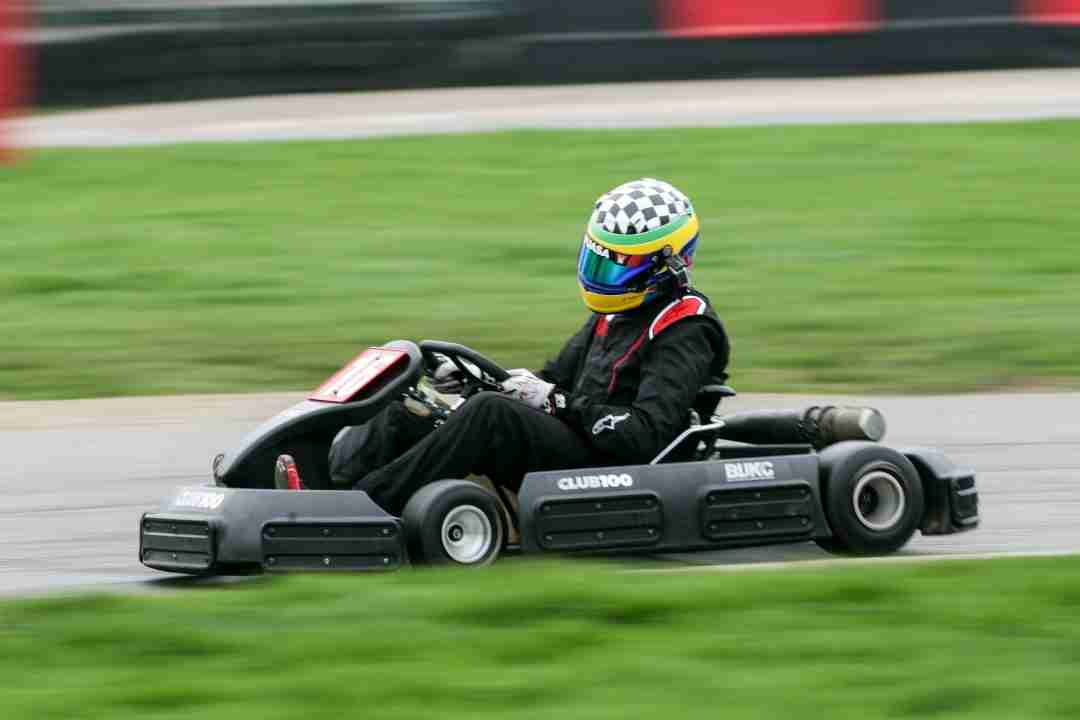 Down the order Holmes was making progress up from grid seventeen. But he was having to fight hard for every place. Newman continued to lead from Powell who once into second immediately began to pull clear of the battle for third. Dix was running sixth after a phenomenal first lap which saw him climb eight places. Newman continued to stretch his advantage at the front and set the fastest lap of the race on the penultimate tour breaking Holmes record in the process and drawing level with him in the Championship. Powell took second well clear of the fight for third which was won by Hicks with Healey fourth after a late race pass on Kyritsis. Teal took sixth with O’Connor next from Dix who fell away over the final stages whilst Darvill took ninth ahead of Holmes.

Bolton on pole from Darvill and Truman alongside Moore on the second row. Neale and Kryitsis shared row three with Holmes and Teal on four from Dixon and Barrs. Newman was starting last. Bolton made a smart start but it was Moore from fourth who caught the eye as he moved up to second ahead of Darvill and Truman. Holmes too got a good start climbing up to fifth Kyritsis ran wide at Inkermans, lost traction on the grass and slipped back towards the rear of the field. Bolton still lead but then Moore moved ahead with a decisive move at Ashby. Bolton hung on to second but only for a lap as Darvill dived up the inside into Christmas. Both ran wide allowing a following Holmes to take advantage and move into second. Bolton appeared to lose his rhythm and by the end of the lap he was down in seventh. Moore continued to lead with Holmes second from Darvill. Truman ran fourth from Barrs. An impressive run this having started on grid ten. Neale ran sixth. 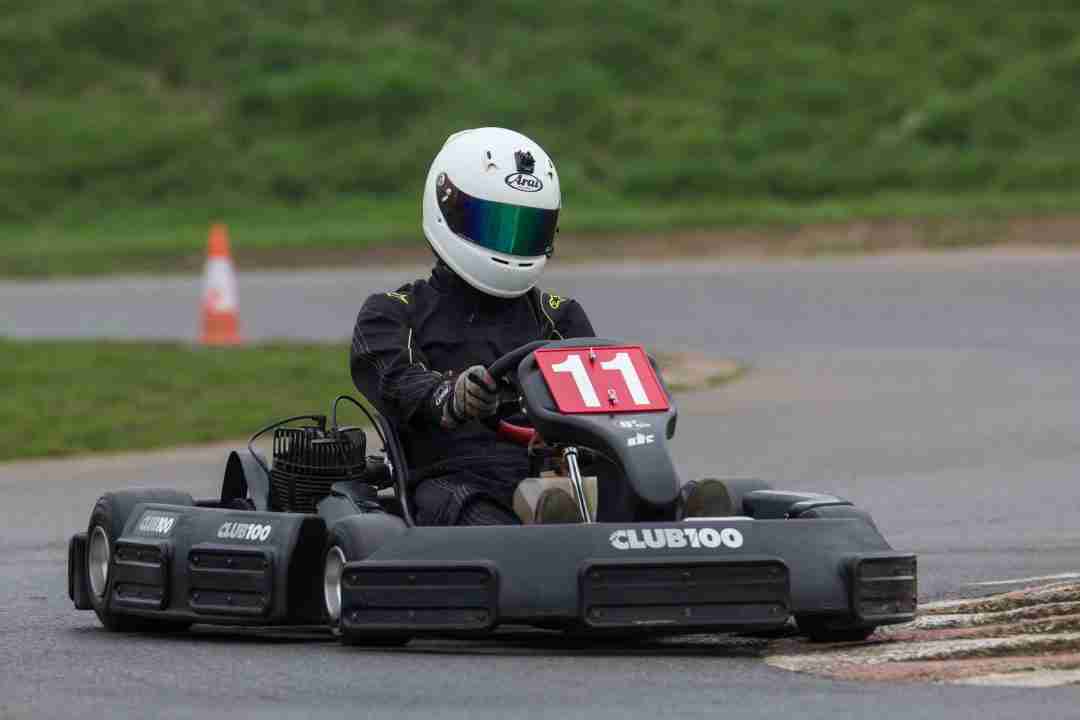 Down the order Newman was making progress but was carrying a cone penalty. He moved up seven places on the first lap. He would continue to make progress. With three to go Holmes went for the lead at Christmas. It was a bold move as Moore was defending hard and well to the right of the circuit but he made it stick. Truman made it by Darvill for third who found himself having to defend from what must have felt like the rest of the field. As Holmes continued to lead Truman took over in second having got the better of Moore through the Boot whilst the impressive Barrs moved into fourth from Neale with Newman right with them in sixth. Neale defended into Ashby but it compromised his line and Newman was ahead at the next corner. Holmes took the win but it was Moore back in second. He got a better line out of the Boot and both he and Truman got very wide out of the last corner running sidepod to sidepod as they headed for the line with Moore getting the verdict by just 0.011. Barrs was tenth back in fourth with Newman next across the line but penalised down to sixth. A great drive nevertheless. Neale was promoted to fifth with Powell next from Elliott, Healey and Dixon whilst Newman set the fastest lap breaking his own lap record.

Despite two heat wins Holmes had to be content with a spot on the front row alongside Championship rival Newman. Powell and Barrs shared row two with O’Connor and Healey on three. Neale and Dix were on four with Elliott and Truman completing the first five rows. As the field ran their warm up laps Holmes was right on the back of Newman’s bumper as the two of them circulated. What did he learn? Was there a power difference? Had he spotted a point on the circuit where his rival was slow? As they came up to the line Newman moved ahead of Holmes with Powell third. Barrs and Healey both lost out as O’Connor moved into fourth. As they completed the first lap Newman and Holmes were already pulling clear with Powell a couple of lengths back but clear of fourth placed O’Connor. Down into Ashby for the second time and Holmes moved to the inside and was through into the lead. Back in fourth O’Connor was having to defend from Dix with Elliott now up to sixth ahead of Barrs. A lap later and Elliott was into fourth from Dix whilst O’Connor got involved in a dogfight over sixth with Barrs. 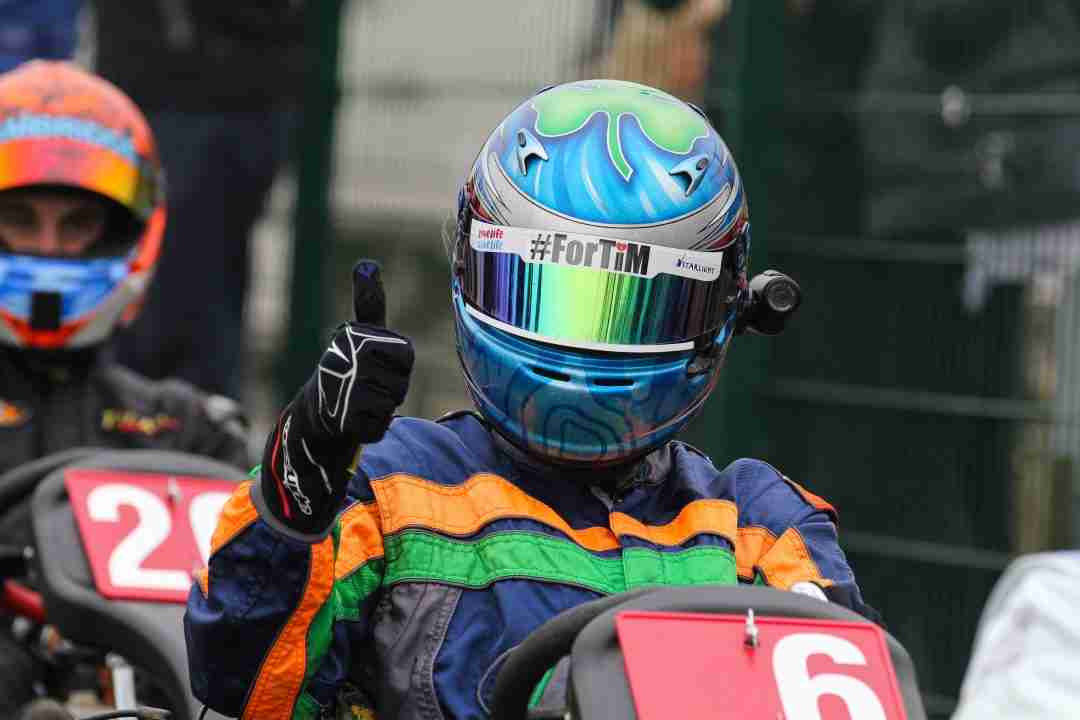 Healey and Neale were both just a Karts length back. Holmes continued to lead by just over a couple of Kart lengths with Powell just a Kart length adrift of Newman. Elliott was next but not looking like a threat to the leaders as he held off the chasing pack. The gap between the leading trio remained fairly constant but Dix was gathering himself up for an assault on Elliott’s fourth place as the battle raged on behind all the way down Kyritsis in eleventh. Then Kyritsis spun coming out of Inkermans and collected Hicks. Game over for both of them. Holmes still led but Newman was having to keep a close watch on Powell who was running right on Newman’s bumper. Elliott was still hanging onto fourth but then Dix got a run up the hill. He couldn’t make the move stick but Elliott had lost some momentum and as they dived into Ashby Dix was alongside and through into fourth. Behind these the battle continued to rage over sixth. Last lap and Holmes was over half a second clear and still pulling away and he duly took the win with his rival Newman second from Powell. Chris Powell then could not crown a comeback that with a win, but showed he had not lost any skills that saw him crowned a triple Premier sprint champion back in the day. Times change but class is timeless and Chris was still happy to take home a goodie bag of car detailing products from G3 Professional Car Care and Detailing Products from our friends at www.Farecla.com with his trophy. Dix came home fourth with Elliott right on his bumper. Neale won the battle for sixth with Teal seventh from O’Connor. Barrs took ninth with Moore tenth after a cone penalty dropped Healey out of the top ten. Dix set the fastest lap with Dixon fastest Rookie.

If ever a man needed a win it was Elite Champion Joe Holmes. And he delivered with a good clean, calculated drive to halt Rob Newman’s run of victories. Twelve points now separate the two Yorkshiremen so the crown is heading North again. Rob will be crowned Rookie Champion but can he claim the overall title? He will need to be at the very top of his game at Buckmore to dislodge Joe. 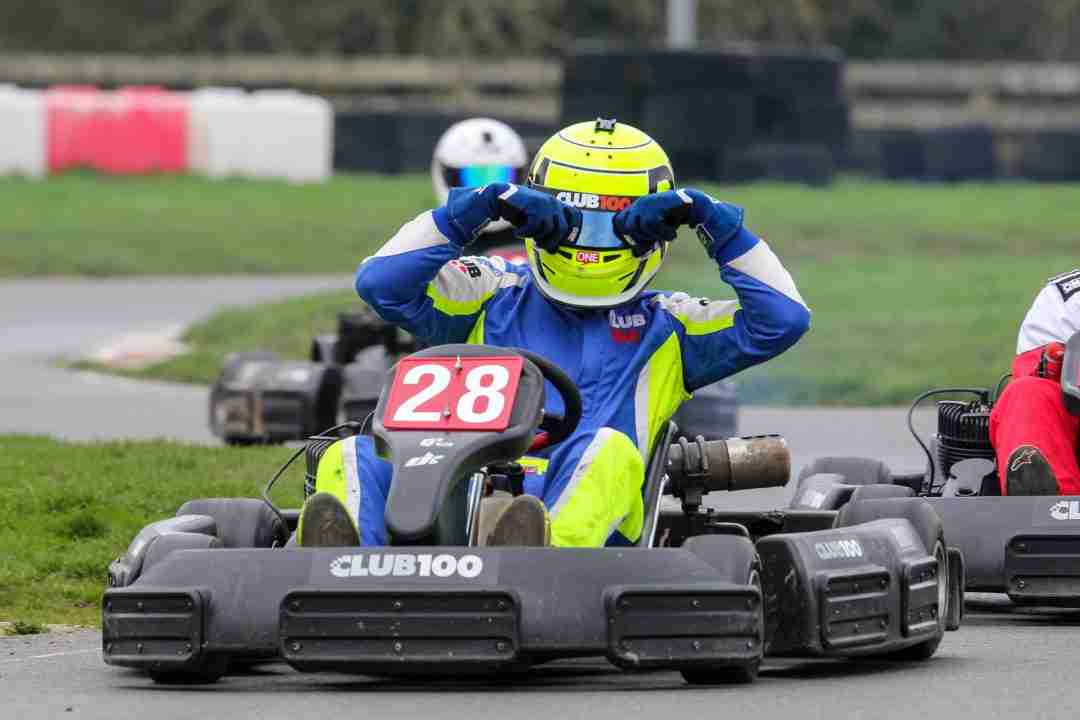 Well that was an entertaining day wasn’t it? Great weather too. Thanks as always to all the hard working Club 100 staff and marshals’ who do such a great job. And I’m told the live coverage was brilliant. I shall be viewing it tomorrow. Thanks to Dartford Karting for their support. Apart from the great racing it was noticeable that on too many occasions Jel Dart was having to call out for pushers in the pit lane. When you end your race, if you don’t have to get weighed, step across and help push out. If you need to have a moan about a penalty do it after you’ve pushed out. You might find that if you give yourself a little bit of time to give your head a wobble any complaint might be better viewed if you present your case in a calm manner rather that blowing a fuse at the wrong people. Just saying.

See you all at Buckmore for the Championship showdowns. It’s going to be greeaatt!!