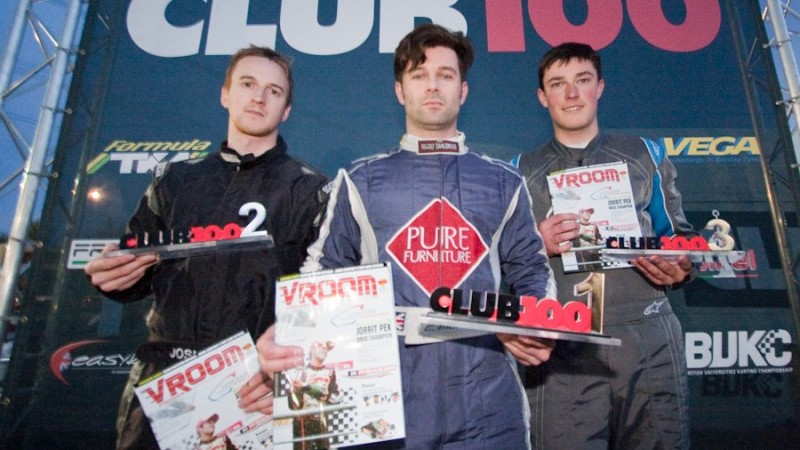 Now It Gets Interesting. Chris Murray Takes A Surprise Win At Rye House.

A surprisingly low turn out for Heavyweights (although any other championship in the country would be happy with 38 for a class) meant only 18 lined up for the Pre B Final. Paul Williams on pole position must have several thousand around Rye House and …

A surprisingly low turn out for Heavyweights (although any other championship in the country would be happy with 38 for a class) meant only 18 lined up for the Pre B Final. Paul Williams on pole position must have several thousand around Rye House and looked like at least one of the likely 4 qualifiers leading out of Stadium and covering up into hairpin 1 when he didn’t need to, as Ben Cottle preoccupied by Sam Jones. Lee Henderson demoted from grid 2 regrouped in 4th ahead of Ben Benneyworth and Ben Daly. Cottle and Jones disputed 2nd place, Williams filled his boots and pulled into a 2secs lead, which he’d manage out to the finish. Pre-B Final Job #1 done for Paul. Get away > maintain a gap > Pre A. Indeed if Cottle and Jones had any sense they’d declare 2nd and 3rd a draw and work together to complete Job #2 Can’t win? > Work together/declare peace > Qualify. This left Henderson to fight off Benneyworth, Daly, Nick Butler, Andrew Cherry, Daren Townsley, Jack Hollingsworth and Paul Goddard. Well you can see how that might be quite taxing on Lee. Benneyworth drafted by into Stadium on lap 6, Daly hung Lee out to dry mid corner. Could the 5 behind Benneyworth hang with him? In short no. Daly made the best fist of it but was still giving ground each lap. Henderson was struggling to hold off Cherry, later he’d try to hold off Townsley who’d qualified so badly qualification was 8secs up the road before he got anything like a clear run toward it. The last 10 laps was waiting for the finish for the top 4 and not making any mistakes, everyone else ought to have been focussing on a fast lap for a front row start in the B Final. A rather below par Nick Breadner would claim pole position, with 5th place finisher Ben Daly on grid for the B Final.

It was a pleasant surprise to see Eric Mignon on pole position for the Pre A Final after timed qualifying, he emerged from Stadium with a few kart lengths lead, I regret his good day really only extended as far as the exit of the last corner on lap 2, whereupon running wide he opened himself to Jack Bolton, who’d been running him down since he placed 2nd off Stadium on lap1. He slid by into the lead inside on the run to Stadium. Barry Luetchford stepping over from Inters Enduro nearly, maybe not quite, champions G3Pro.com, for all your car care needs (we don’t do product placement, but if we did this is what it would be like) had been on the front row with Eric, but grid 2 is grid 2 and he’d lost out to both Bolton and Pettit before the hairpin. Still he didn’t get left behind there like Mark Turner – animated after being ejected from the scrum. Sam Jones fell off on his own at Pylon, did that feel worse? Knocked out or fell off? I’m not sure.

Behind Bolton on Mignon’s bumper, the front settled in with Pettitt, gap to Leutchford under pressure from Downes, gap to Docker, Hill, Townley, et al all the way back to Clist in 14th. After Bolton got by Mignon’s defence of his position would serve to spread the front of the race out as it passed him. After it looked like Eric could hold Josh off, it would take Pettitt 3 laps to find a way by and in that time Jack had built a 2secs lead, which would be 5secs by the finish. Perhaps the imminent arrival of Downes and Leutchford spurred Josh on, once again Eric was passed into Stadium and he was immediately under pressure from Downes, Tim Hill closing on Leutchford in 5th, as Mignon now tried to hold off Downes for 3rd. Mike Townley headed a 3 way battle over 7th with Gurnett and French, Hattersley and Murray were arguing over 10th. Chris winning it. It would take Steve Downes 2 bites at the cherry to pass Mignon for 3rd eventually on lap 13, by then Pettitt was himself 2.5secs up the road and safe in 2nd. While getting it done in hairpin 2, Downes had pushed Mignon back into Leutchford and before he could get back into his rhythm, Barry had dived inside into hairpin 1, slow off the corner and again backing up Eric, this time into Tim Hill, who took a punt in Pylon, before getting it done in hairpin 2 and towing Martin Gurnett through the next lap. It must have been demoralising for Eric, indeed I know it is, not just from bitter personal experience but because Eric told me as much. And thats how it finished. A cruise for Bolton, comfortable for Pettitt, then Downes, Leutchford, Hill, Gurnett, Mignon, French, Hattersley and Townley in 10th.

So just 14 for the B Final, Nick Breadner and Ben Daly on the front row. It would be Nick emerging from Stadium with Jack Hollingsworth on his bumper from grid 3, a bit ropey out of the infield and into Pylon, and Jack had backed Daly sufficiently into Michael Jungling to let Michael get through to go 3rd, allowing Nick a few kart lengths lead. Daren Townsley on made it a group 4 fighting over 2nd place and the remaining qualifying spot. Andrew Cherry bringing the rest of the field through but 1.7secs behind. They had work to do. Townsley moved passed Daly into hairpin 2 and Ben was in danger of falling off the back. Jack pressed for the lead but Nick slowed the pack down long enough to let Daly wake up and drive through to 3rd, then Breadner pulled Hollingsworth and Daly clear again. Mid race was about making progress, or not. Jungling struggling to bridge the gap to Daly, while Townsley tryied to pass Michael for 4th, just not lose ground in the process. Lap 12, Hollingsworth half spun away 2nd in a badly executed attempt on the lead into hairpin 1. Doh! Daly breezed passed Nick in Stadium the very next lap. It left Breadner fading badly off Ben’s bumper and slipstream he really ought to have stuck to. Jungling taking over a second out of him. Michael cruised up behind into Pylon and was through inside into the 2nd apex emerging from around the new pit entrance in 2nd place. After a few corners, and the obstacle of David Stirling spun for the 4th or 5th time at hairpin 1, Michael was clear of Breadner and heading for qualification behind Daly who was up the road already.

Chris Murray’s progress in the Pre A Final had run into Daniel French (I think) around mid race, and he’d slid back down the middle order to finish 13th, that became 17th with a advantage by contact penalty. It wasn’t all bad news and behaviour as he set a fastest lap for grid 2 in A Final beside pole man pre final winner Jack Bolton. Behind Gurnett and Hattersley probably took advantage of some mid race room to slipstream to the 2nd row capturing times. These 4 with Josh Pettitt exited hairpin 1 cleanly to get a break on Steve Downes diving inside at hairpin 1 of Mark Turner who was in turn shepherding Daniel French on his outside to nowheresville off the corner. Back on from the escape road French would set off after Turner in 7th. Pettitt shot and missed at Hattersley into the hairpin, and dropped himself on Downes’ nose, more importantly falling off the back of the quartet up front.

And that was the thing. If you shoot you had to score.

Gurnett took a look inside of Murray into hairpin 1 couldn’t get it done, but gave Hattersley the impetus to try and fail into hairpin 2, net result Bolton pulled a gap up front, Pettitt and Downes closed in behind. But Bolton was half a second slower than Murray, maybe distracted by Mignon homing into view to be lapped in the growing gloom, and it all came back together around the end of lap 4. 1st through 6th in line. Hill picked a good time to pass Mark Turner for 7th if he wanted to get in on the action, Darrell Lowe diving passed Mark into hairpin 1, before the train up front left. But he better hurry. Gurnett looked inside Murray into hairpin 1 and spoilt Hattersley so much into hairpin 2 that by Pylon Pettitt was 3rd, Gurnett, Downes, Hill had all passed James. Hattersley dived inside of Hill into hairpin 1, then ran through Downes into hairpin 2, Hill followed him putting Downes in the rear with the gear. Except in switching around it had become a group 4 clear of a group of 5 as Lowe and Townley had caught up the 2nd group. Ahead Murray had got a better run off hairpin 2 and out dragged Bolton into Pylon to lead. The penny dropped behind and group 2 let Hattersley tow them back to the leading quartet and it became a leading line of 9 at half distance. Hattersley and Hill pushed through Gurnett, at the price of losing a little ground on Murray, Bolton and Pettitt, a price worth paying if they could close them back down. A feisty Pettitt tried to squeeze through to 2nd between Pylon and the last corner and gave everyone a sense that Murray could win this one. Hattersley jumped Bolton into Stadium.

The run to the flag was on, Murray  couldn’t break clear yet, but managed to keep the leading 9 stretched, becoming 8 as Downes fell off the back. Bolton and Hill, and Lowe and Gurnett went side by side through Pylon, with 2 laps to go they’d probably been pushed to act but had also blown their chances of the podium in trying, a trio was then clear out front. Nose to tail Murray, Bolton, Hattersley to the finish. Then through the hairpins to Pylon Murray pulled a couple of kart lengths, not much but enough for the last lap. Clear of Pettitt  through the hairpins or Pylon was too late, nor was Josh anywhere near for the last corner. Pettitt made it a brace of 2nd places, Hattersley was on the podium for the third A Final in a row – a nice habit to develop. Lennie Wood took Super Heavyweight honours finishing 15th, however Stuart Kirk’s finishing record means he won’t be caught for that title at Buckmore Park.

One more round at Buckmore Park on 21st November.