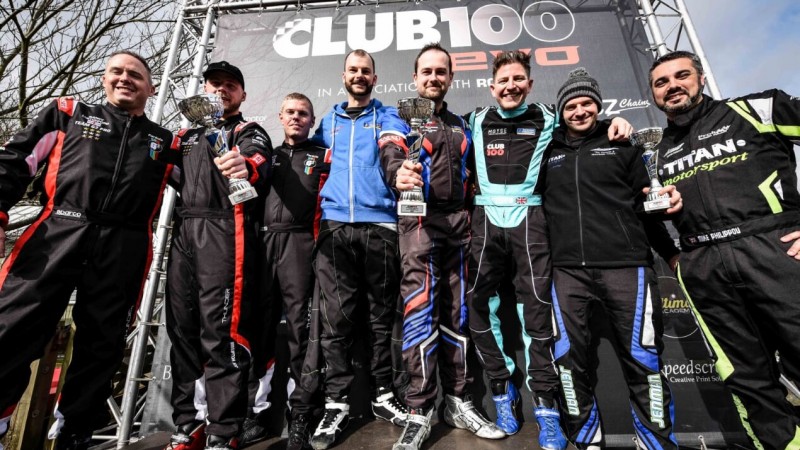 The 28th season of Club100 racing kicked off at its traditional Buckmore Park venue. The series continues to go from strength to strength and boasted full grids and a raft of new faces, which is always nice to see.

With no major rule changes to tweaks to the format, things looked much the same as last season. Reigning champions Titan were back to defend their title. The Ministry of Speed name was also back after the withdrawal of their title sponsor. G3Pro and G3Pro Farecla were also back to challenge for top honours. There was a new team in the form of RAD Racing; which comprised Rob Moore, Andy Hall Jr and Darri Simms. Briars Racing is also a new team to watch out for this year with (I think) Anwar Beroual-Smith and sprint 60 sensation Greg Barnard. There was no Simon Young, Justin Buck and John Pethic at this race. Sad but one less silly team name on the grid.

Titan motorsport carried on where they left off in 2019 by claiming pole position. Briars racing were an excellent second in class ahead of the equally menacing looking Applewood Racing. G3Pro were next up ahead of an off colour looking Ministry, who could only manage 9th overall. G3Pro Farecla, RAD Racing and Clunge completed the premier lineup.

In total, a full grid of 34 karts lined up to take the start and Briars Racing led round the opening lap followed by Titan Motorsport. Team Applewood maintained their second place but slipped back from the leaders after the opening lap.

Titan got the lead back on lap two and Briars slipped down the order over the next few laps. G3Pro, Ministry and Team Applewood continued to lay down consistent lap times and kept the leaders honest.

The first of many upsets occurred on lap 14. After making their first pit stop, Titan were straight back in the pits to serve a penalty for multi conabuse. Two lapos later and Ministry of Speed were handed a black flag for repeatedly exceeding track limits. This left G3Pro at the front.

After the first round of stops, G3Pro had a commanding lead over Team Applewood. RAD Racing were still third and they were comfortably ahead of fourth placed Clunge. Titan were rapidly closing the gap but were receiving more warnings for track limit violations and contact.

Briars Racing’s first outing started with much promise but soon turned into a bit of a disaster. A crash early on saw them relegated to the back of the field and, several laps down, there was no hope of a recovery. A black flag late in the race only compounded their misery. Still, onwards and upwards…

During the second pit window, race leaders G3Pro picked up a black flag for multi track limit warnings. This played into the hands of reigning champions Titan, who had been quietly getting on with the job and had worked their way back into a potential podium position.

Although they had a few warnings, Team Applewood were in a strong position by half distance and leading Titan by nearly half a lap. Because of their contact warnings, the leaders would need to be mindful in the second half of the race. Pit stops and strategy would also be important as this is an area in which Titan is historically very strong.

Ministry of Speed had struggled to break into the top ten. It took them over an hour of the race to do so while their main title rivals were back in contention for the win. Team Applewood may have been feeling the pressure and received another warning for track limits. This put them in danger of picking up a penalty and handing the lead back to the reigning champions. RAD Racing continued their solid day and were comfortably third. G3Pro Farecla were still fifth and, by lap 89, were almost a lap behind the leaders.

It’s worth mentioning Clunge Racing. For no other reason than I didn’t notice them at all during the race and only remembered they were racing while writing this report. They appeared to struggle to break out of the midfield but hopefully they’ll have better luck at the next race. They have the talent to do so. Oh and they got a black flag for exceeding track limits.

Team Applewood continued to lead with twenty minutes of the race remaining. G3Pro and Titan were in a close battle for second, although there were still more pit stops to make. They emerged from their last stop with just over a second in hand and, over the remaining laps, managed to gradually increase the gap.

Up at the front, the Applewood boys seemed to have things under control. The gap remained fairly consistent and they drove faultlessly. With their good pace and ability to stay out of trouble, Team Applewood came home to seal their first premier victory with a gap of nearly half a lap. G3Pro took a fine second place and Titan came home third. RAD Racing’s first outing together yielded a fourth place finish – a more than solid start. G3Pro Farecla were fifth and Ministry a rather disappointing sixth in class, one lap down. This no doubt caused more grey hairs on Pete O’Connors already significantly silvery head.

So a great start to the season for Team Applewood. G3Pro and Titan are obviously going to be title contenders again and, despite a low key start to the season, Ministry will certainly bounce back at Clay. If Team Applewood can continue their form, they could cause the top three some serious headaches. RAD Racing and Briars Racing are two teams to watch this year. Both have a strong lineup and are both dark horses. 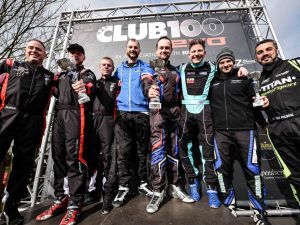