Liam Cochrane topped the times with his first flying lap and after that was never headed. He lowered his time after three laps but couldn’t quite get down into the forty threes. Freddie Fincham fought hard finally setting his best time on his last lap just 0.077 shy of Cochrane’s best. Darren Martin set his best time on his final lap 0.092 away from Martin with Mackenzie next 0.056 adrift of Martin and just 0.019 up on Mike Noon. 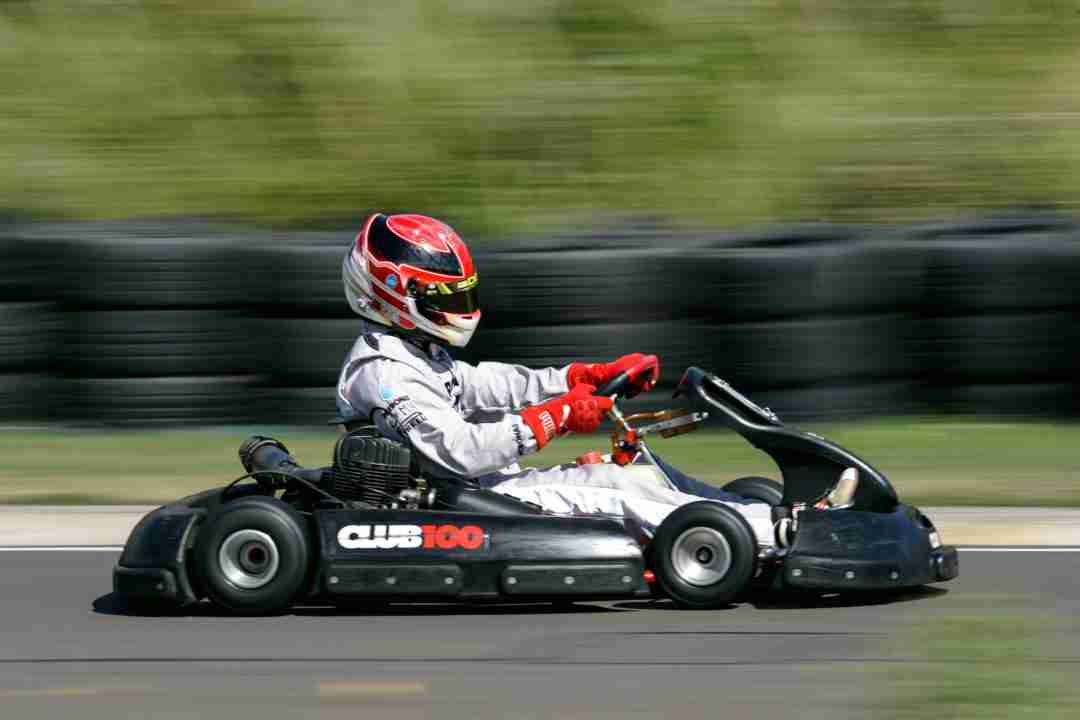 Sammy Venables headed this group setting his quickest time just two laps in. Chris Bell ran him close, very close, missing out by just 0.009. Seb Algieri was third quickest. He showed good pace at Clay and the ex Easykarter is clearly beginning to get to grips with Club 100 machinery. Chris Woodger was next, just pipping Championship leader Darri Simms by a mere 0.004. 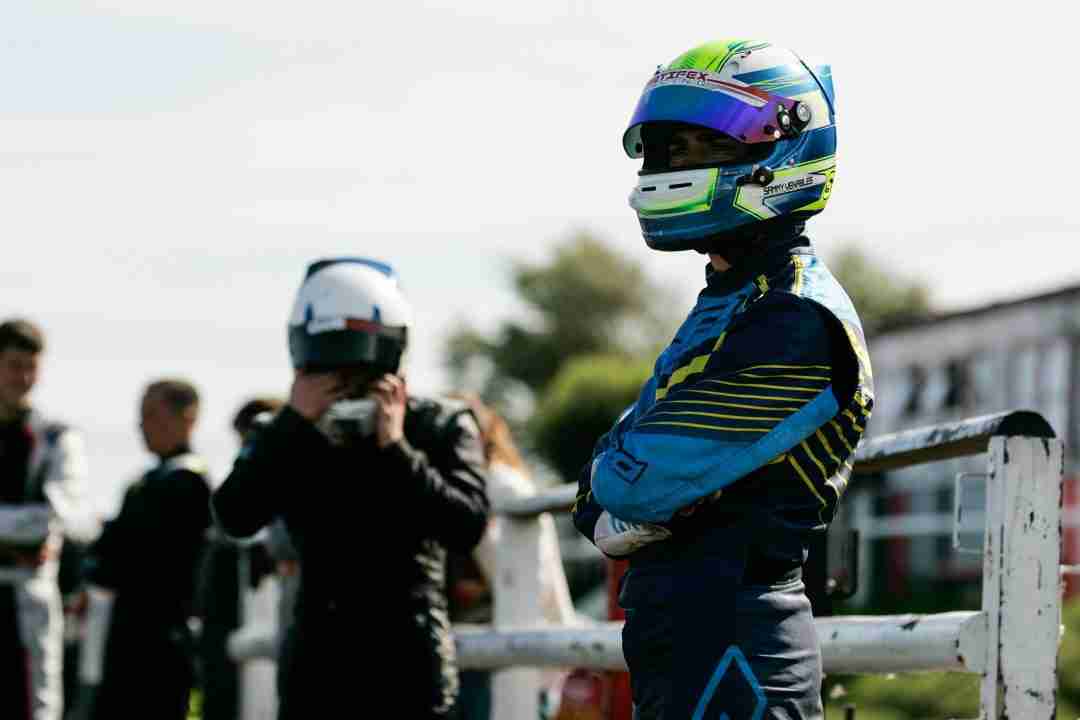 Venables led the field round the formation lap but coming out of the final turn he got a little out of shape and bogged down slightly as they ran towards the start line. From my vantage point fellow front row sitter Cochrane was ahead by the time they reached the line. Clearly a jumped start. I don’t envy the Clerk of the course or the timekeeper at times like this. There are never enough pairs of eyes. Woodger, in sixth, received a contact warning whilst Cochrane was shown a penalty for a jumped start. Venables slipped into second behind Cochrane with Bell third from Fincham, Algieri, Woodger and Simms. With three laps run the order remained the same but then Simms got ahead of Woodger for sixth. Woodger responded and the following lap struck Simms hard from behind into the final corner. Simms ran wide but Woodger gave him room and didn’t take advantage of the heavy contact. A lap later he made the move a little earlier and looked to have made it stick but he clipped the kerb on the inside of the final turn and ran wide clipping the tyre wall. Dramatically he spun down the wall but finished up facing the right way and still with enough momentum to keep going. He had however dropped to nineteenth. He admitted after the race that it was entirely his own fault. 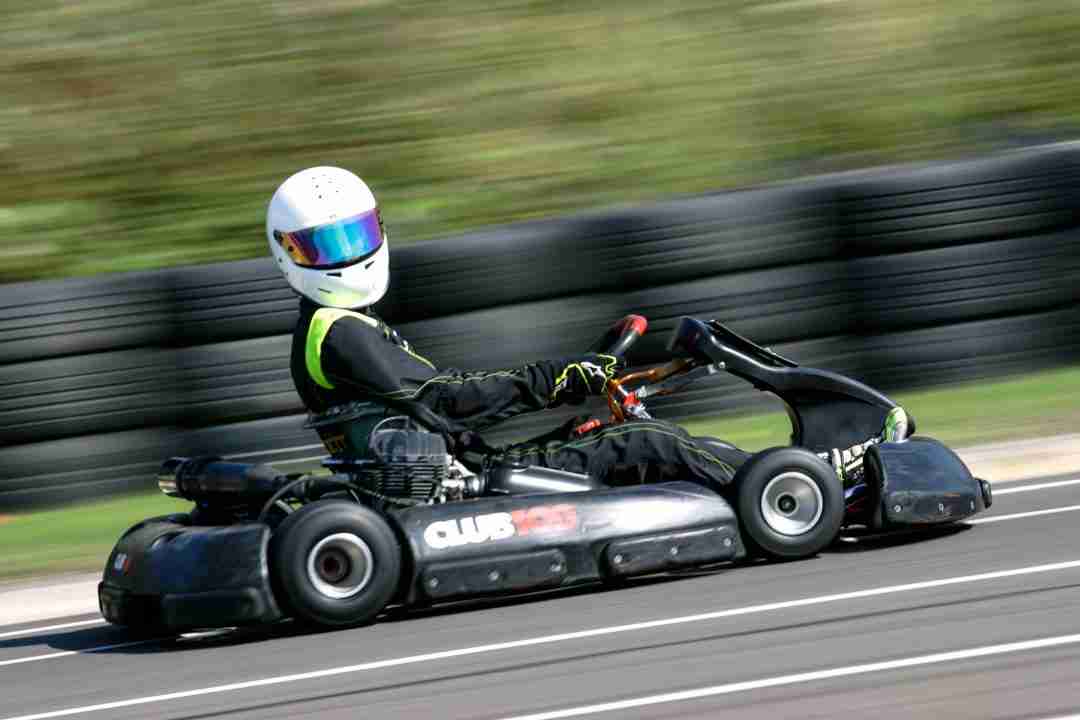 Into the final laps and still Cochrane led from Venables but Bell wanted second, which would translate to a win with Cochrane’s penalty. On the penultimate lap he made it through only for Venables to respond and take the place back on the final tour. Fincham too made it through. Cochrane though got to keep the win. His appeal was backed up by Fincham who had been hit from behind by an unsighted Woodger as Venables bogged down and pushed the helpless Cochrane forward. Fair enough. Algieri came home fifth ahead of Simms who set the fastest lap of the race with Nash seventh from Dawes, Martin and Atkinson.

Simms on pole from Algieri with Venables and Fincham on two from Bell and Cochrane on three. Row four, Nash and Venning with Dawes and Moon completing the top ten. Into the first corner and for the first time all day we had an incident. With several Karts stationary a restart was called. Among those involved was Liam Cochrane with broken steering. You need a bit of luck to win a Championship as well as outright talent. This was Cochrane’s day. As the field circulated behind the pace Kart he was back into the pits, into another machine and resumed his place on the grid. Simms led the field away whilst Fincham got a great start to slot into second ahead of Algieri. Venables got swamped dropping down from third to tenth as Bell and Cochrane both moved up a place. 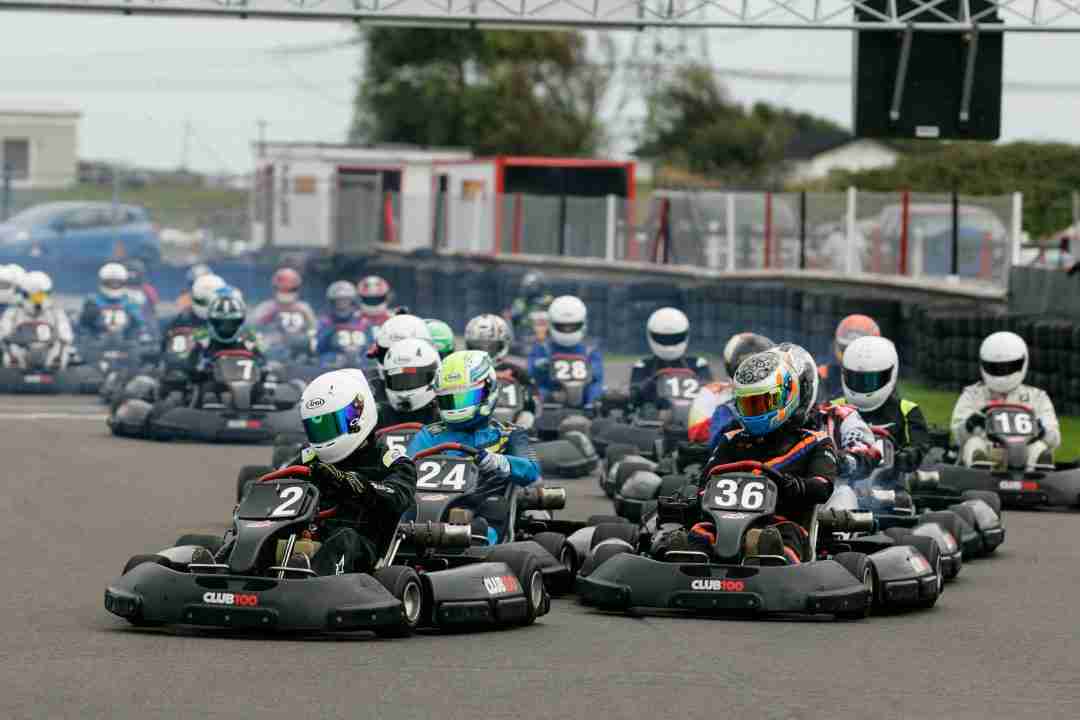 Simms began to edge away from the battle for second as Fincham held off the charging Bell with Algieri now down to fourth ahead of Cochrane, Nash and Dawes. Bell was really flying and three laps in he was up to second and chasing down the leader. It didn’t take long. As they came down the straight for the fifth time Bell moved ahead into the braking zone. Simms gave him plenty of room and Bell was through into a lead he would never lose. Simms didn’t fight back preferring to follow the leader and pull away from the chasing pack which they quickly did. Cochrane moved ahead of Algieri for fourth and a lap later Nash deposed Algieri for fifth. The leaders by this time were well up the road but Simms was dropping back from the leader now although he looked well safe in second. As the race wound down the top order remained static but ever so slowly Simms was being hauled in. Still, with three to go he still looked secure in second. But on the penultimate lap Fincham gained almost half a second carrying Cochrane and Nash with him. Into the final lap and Simms lead was just a few Kart lengths. Down at the far end of the circuit he was having to defend. Exiting the corner onto the back straight Fincham was alongside. The two touched, rubbing wheels and delaying them both. In a heartbeat Cochrane was through into an unlikely second with Nash behind him. Bell crossed the line almost three seconds to the good and oblivious to the fight behind whilst Cochrane took second from Nash, Fincham and Simms. Simms was disgruntled after the flag having lost valuable points but Fincham was entitled to make the move even though it cost them both a podium. Atkinson came home sixth. 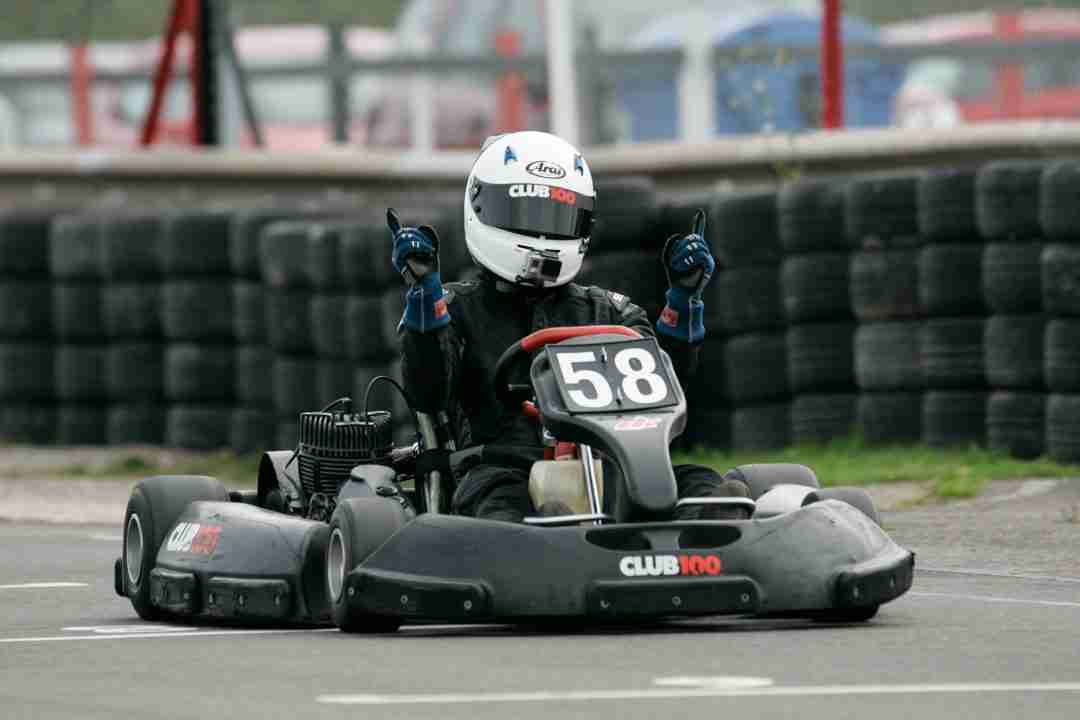 A good run this up from grid eleven. Woodger too in seventh had a good drive up from grid fifteen whilst Algieri finished eighth losing a couple of places on the penultimate lap. He should not be disappointed however. This was another strong showing and he is really getting to grips with the Karts and format. Venables was next and set the fastest lap establishing a class record in the process whilst Venning completed the top ten. A great win for Chris Bell, his first of the season.

Darri Simms continues to lead the standings despite losing valuable points at Lydd whilst Chris Bell’s first Final win of the season keeps him well in the hunt. Liam Cochrane admitted he had had some luck at Lydd but it should not detract from two good drives. He’s closed the gap again to the leader but the pressure is still on him. Having missed three rounds and after an indifferent performance at round two he can’t afford any slips. 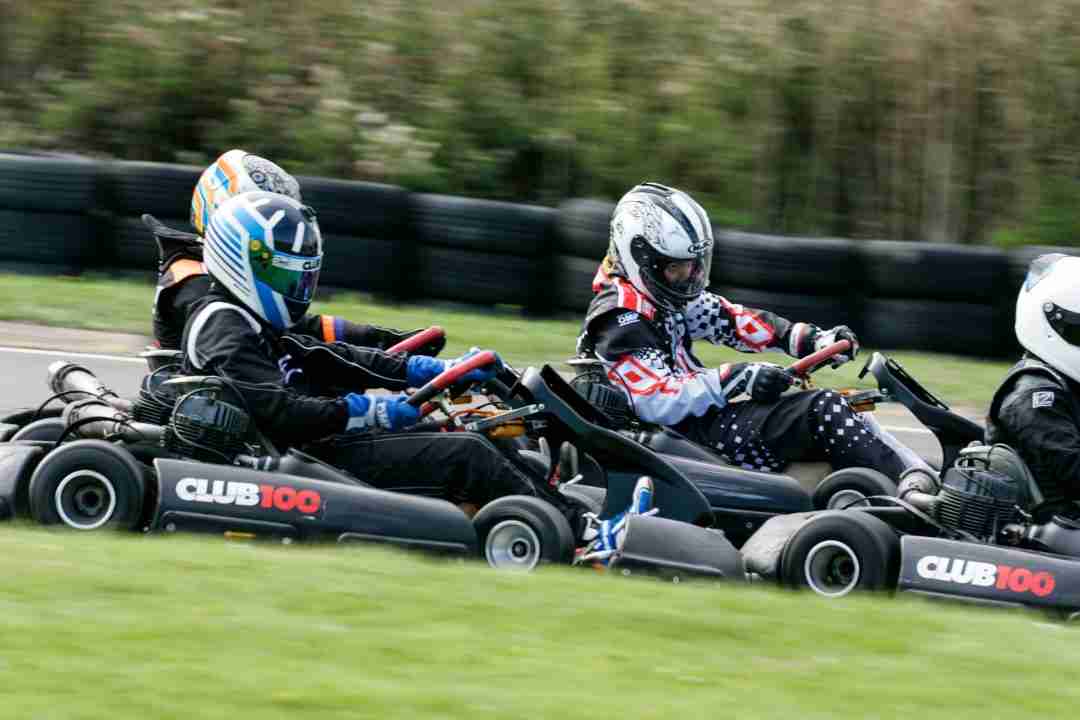 A thoroughly entertaining day at Lydd for the Sprints with some very good drives across all the grids. My only disappointment was hearing the criticism of James Hattersley from a few drivers over his decision to run in the Heavyweights in the afternoon. James has cut a pretty disconsolate figure over the last few rounds in the Elites. His height and weight have penalised him to a great extent and he was on the point of giving up which would have been a great shame. I know the sacrifices made to keep him racing and I won’t embarrass his dad by repeating them here. Enough to say that they arrived home at 1-30am on Monday morning and Wayne was back out at five to go to work. The Hattersley’s epitomise all that is right about grass roots Karting and being a part of Club 100 so suggestions that he was pot hunting are well wide of the mark, unfair and uncalled for. In fact when he stepped down off the podium the first thing he did was to give me his trophy. I did return it. James had earned it. All the family love being a part of Club 100. They derive a huge amount of pleasure off track, as do many others including myself. It’s the camaraderie, the ‘’craic’’ if you like. That sense of belonging and enjoying the company of like minded individuals. Having found that the M20 was blocked and that it would be a long drive back to Yorkshire the decision was made to make a day of it and enter the Heavyweights. As he had a perfect right to do. This was about finding a level where he would be able to enjoy the racing and not just running on his own at the rear of the Elites. In many ways it was a brave decision for a young man to admit that he was struggling in the top class. That he won was an unexpected bonus but it will have certainly given his flagging confidence a much needed boost. Everyone races to win but above all it’s about enjoyment. Both on and off the track. As our Elite drivers constantly show. I have no doubt that there are a number of them who don’t do themselves justice on the track but that misses the point. They thoroughly enjoy their weekends racing, win or lose.

Last but certainly not least our sincere condolences from all at Club 100 to Darri and Steph Simms on the sad loss of your daughter Senna. We are all thinking of you at this most difficult time.

See you all at Clay.