Heat 1 With dark clouds looming the field formed up for the opening race of the day with Harry Neale on pole from Ian Blake who almost failed to make the grid having arrived late at the circuit. Jack Harding was on row two from Seb Algieri, the latter being one of several guest drivers in the morning races. Rob Moore and Ben Benneyworth were next up from David Longman and Championship leader Joe Holmes with the EssexFlatPack Super Heavyweight sponsor Stuart Germon and Rob Newman completing the first five rows. There were a few spots of rain in the air as Neale led the field away but Blake made the better start and was soon in front. Harding and Algieri held station whilst Moore got shuffled down the order dropping to tenth by the end of the first lap. Germon got delayed dropping to the rear of the field whilst Newman rocketed up to fifth ahead of Holmes. Blake gradually began to ease clear at the front from Neale, Harding and Algieri whilst Holmes moved ahead of Newman. Jay Elliott too was closing in having started from grid twelve. 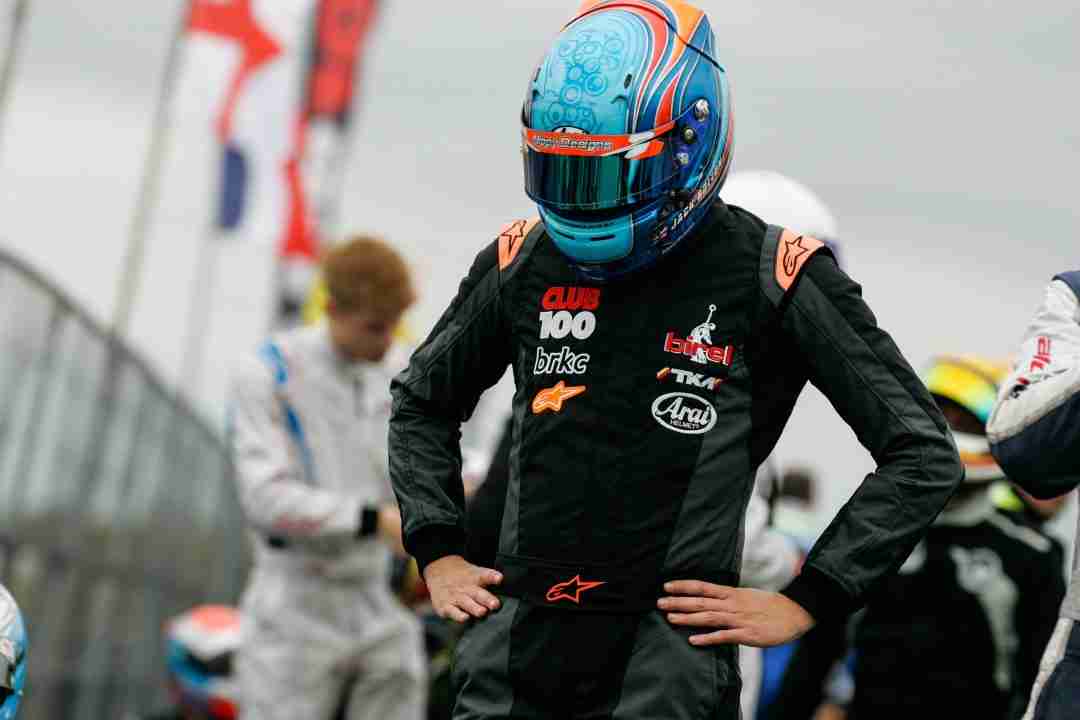 As Blake continued to pull clear Harding moved up to second at the pit lane chicane. Algieri lost momentum and was shuffled down to eighth behind Elliott, Newman and Daz Teal. Harding’s second place lasted but a lap as Holmes moved ahead out of turn two. All this squabbling was allowing Blake to build a big lead but once into second Holmes began to push. Harding was hanging onto third at the end of each lap but it was not without having to defend repeated challenges from Newman, Neale, Teal and Elliott. As the rain began to increase in intensity the lap times began to increase. Blake continued to lead whilst Holmes began to cut the gap. Running now in clear air the two of them were puling well clear of the chasing pack. Blake took the win just over a second clear of Holmes with the latter some six seconds clear of third. Newman took the place on the final lap but had made contact. The resulting penalty dropped him to seventh handing the place to Neale with Teal next from Harding and Elliott. Jack Bolton, Algieri and Steve Hicks completed the top ten. Heat 2 Pole for Teal with Elliott alongside and Hicks and Ben Yarwood on row two. Peter Harris and Ed Barrs occupied row three, both drivers looking for a good result after their first heat dramas. Dan Truman and Pete O’Connor shared row four with Bolton and Neale completing the top ten. Due to a light malfunction the start was slightly delayed meaning that there would only be time for six laps in the still wet conditions. Teal led the field away but got in too deep into the first turn allowing Hicks to grab the lead. But into the following right hander he ran wide allowing Teal back into the lead with Elliott also taking advantage to run second. And that was still the order as they crossed the line at the end of the lap. But fourth was first heat winner Blake. Starting from grid eleven he’d been mighty over the final part of the lap. O’Connor was next from Truman with Holmes seventh. He too had driven a fantastic first lap moving up from grid seventeen. Down into the first corner for the second time and Blake moved to the inside to execute a double pass on Elliott and Hicks. Elliott fought back into turn two but Blake emerged at the front and held on through turn three. Up into the fast left hander he stayed well to the left and then cut back under Teal as they entered the pit lane chicane. It was a bold move but he made it. Behind these was an almighty fight for third. 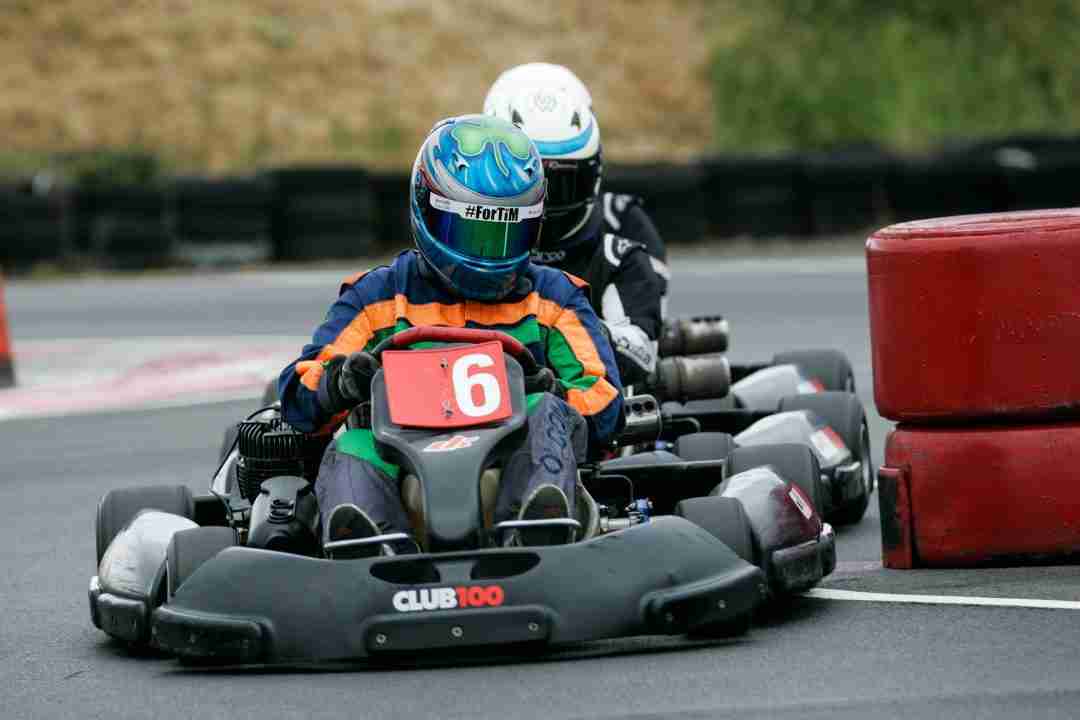 O’Connor took the spot at the pit lane hairpin and immediately pulled clear by a few lengths as Elliott, Holmes, Hicks and Truman lost momentum. Elliott held fourth as they entered the pit exit hairpin but Holmes led out of it only to lose the place at the next corner. Blake and Teal were clear at the front with O’Connor several Kart lengths clear of the battle for fourth. Down into the first corner and Holmes pulled to the inside. Elliott responded but Holmes had the better line into the next right hander and moved into fourth. Blake meanwhile was pulling clear at the front as Teal came under pressure from O’Connor the latter finally making it through round turn two with a couple of laps remaining. Blake took his second win of the day almost five seconds clear of O’Connor with Holmes next. Barrs took fourth and set the fastest lap of the race with Teal fifth from Elliott. Newman took seventh after an eventful run up from grid nineteen with Harris next and fastest Rookie whilst Harding and Yarwood completed the top ten. Heat 3 Newman on pole from Bolton with Germon and O’Connor behind. Holmes and Truman on three from Longman and Barrs with Benneyworth and Harris completing the first five rows. And still the rain came down. Newman led the field away but it was all a bit frantic through the first turns for the rest of the pack. Newman led across the line at the end of the lap with Holmes second and Bolton third. Fourth was Blake. Up thirteen places on the opening lap! Longman was next from Benneyworth with Harding next having fought his way up from grid fifteen. 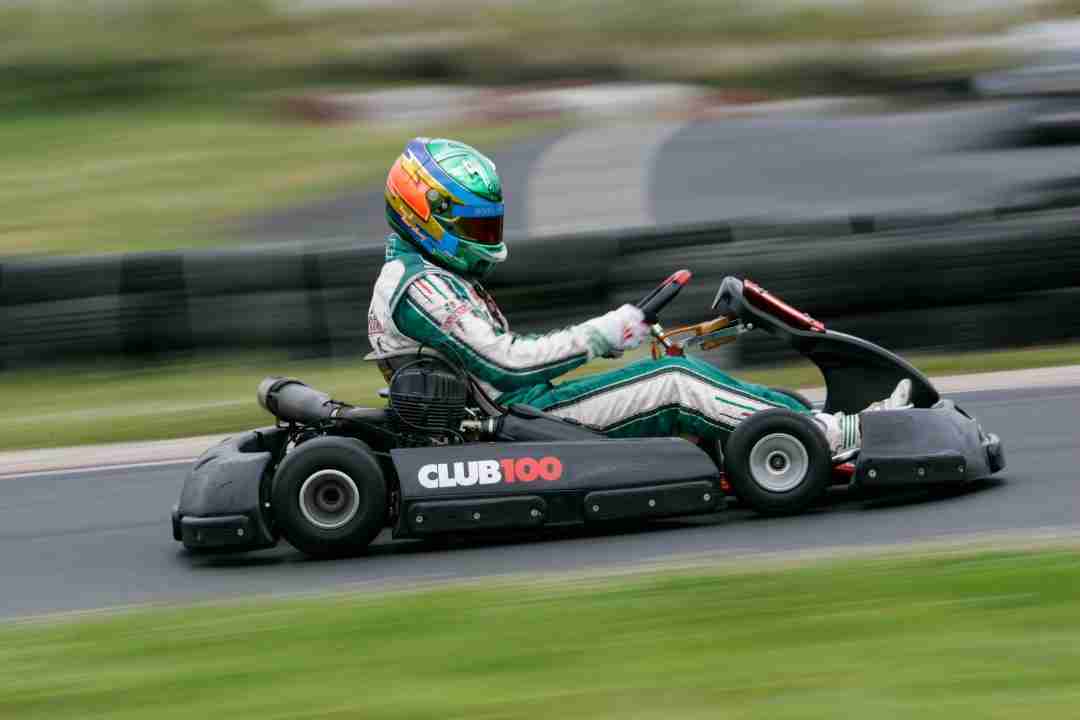 Newman continued to stretch the gap at the front whilst Holmes, Bolton and Blake disputed second place. Harding slipped into fifth with O’Connor next. Having started fourth he’d been delayed over the first lap dropping down to eleventh before fighting his way back through the pack. The battle for second continued with Blake into third and closing in on Holmes. Briefly he got ahead at the end of the penultimate lap only for Holmes to fight back. As they swept into the pit exit hairpin Blake went round the outside into second but then ran a little wide into the final left hand hairpin. Holmes didn’t need asking twice and moved back into second. But had his tighter line compromised his momentum? Not by enough. Newman took a lights to flag win by over three seconds from Holmes with Blake third from Bolton. Fifth went to Harding with O’Connor sixth. Rob Moore crossed the line next but he was carrying a penalty and dropped out of the top ten promoting Barrs, Hicks, Longman and Neale. O’Connor set the fastest lap. Final Blake on pole from Holmes with leading Rookie Newman and O’Connor on two. Row three, Harding and Teal with Elliott and Bolton on four from Hicks and Barrs. After a false start due to technical difficulties the field lined up again. Holmes got off to a flyer to lead into the first turn but then ran wide handing the place back to Blake. But he got a good drive out of the corner and was alongside the leader by the time they arrived at turn two. Behind, Teal pirouetted to a halt dropping out of the top ten. Holmes made it by Blake for the lead and Newman too went through. As the field crossed the line at the end of the lap the digiboard showed a penalty for the leader just to add to the drama. Holmes didn’t slacken his pace however keeping the gap steady to the chasing Newman with Blake third but seemingly powerless to climb back to second. And Harding was close at hand. Half distance and Holmes was still clear from Newman but Harding was putting more and more pressure on Blake for third and duly took the spot after Blake went in too hot into turn four and ran wide allowing Harding to out drag him on the run up to turn five. 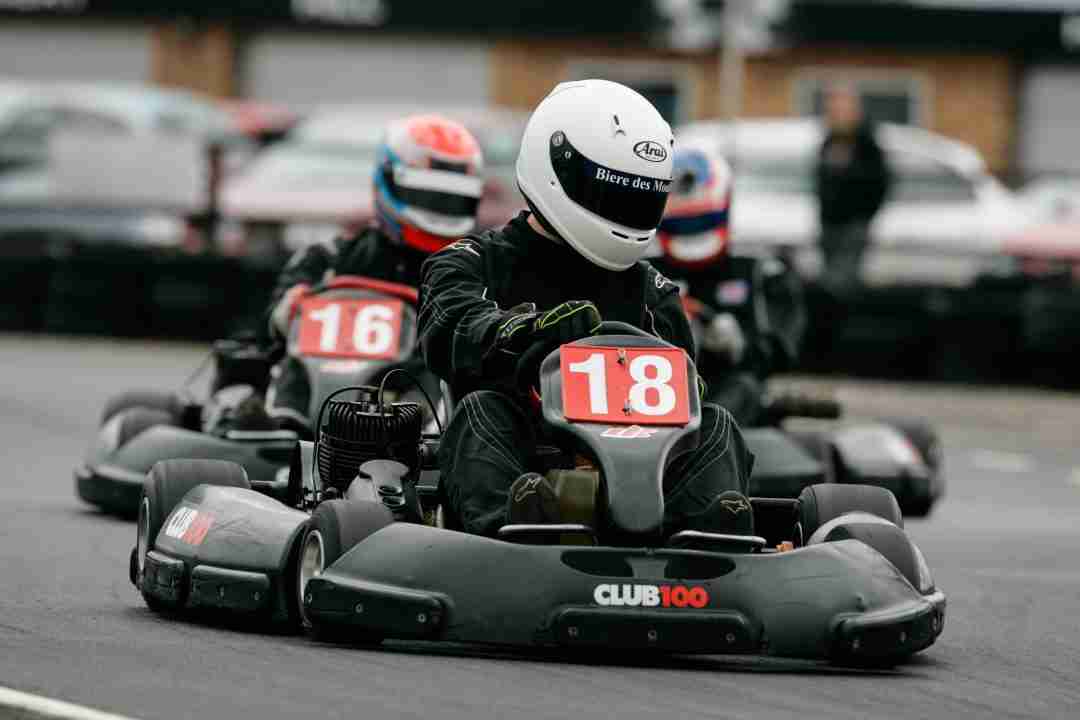 Behind these Neale was running fifth ahead of Bolton and a recovering O’Connor who had dropped from fourth to eleventh on the opening lap. Half distance and O’Connor was ahead of Bolton and closing in on Neale. Holmes remained at the front of the field and crossed the line nearly three seconds clear of Newman. But had he won. After hearing from several other drivers the penalty was overturned. Holmes felt he’d been pushed across the line and those behind concurred. And he had given the place back. Some good sportsmanship here from his fellow competitors and good to see. Newman then had to settle for second spot and leading Rookie with Harding third. Blake felt he just didn’t have a quick enough Kart to compete. He wasn’t complaining though. O’Connor took fifth over seven seconds adrift but it was a good drive nonetheless. Neale was sixth just a couple of tenths back with Bolton seventh. Eighth went to Hicks who also set the fastest lap of the race whilst Elliott and Barrs completed the top ten. 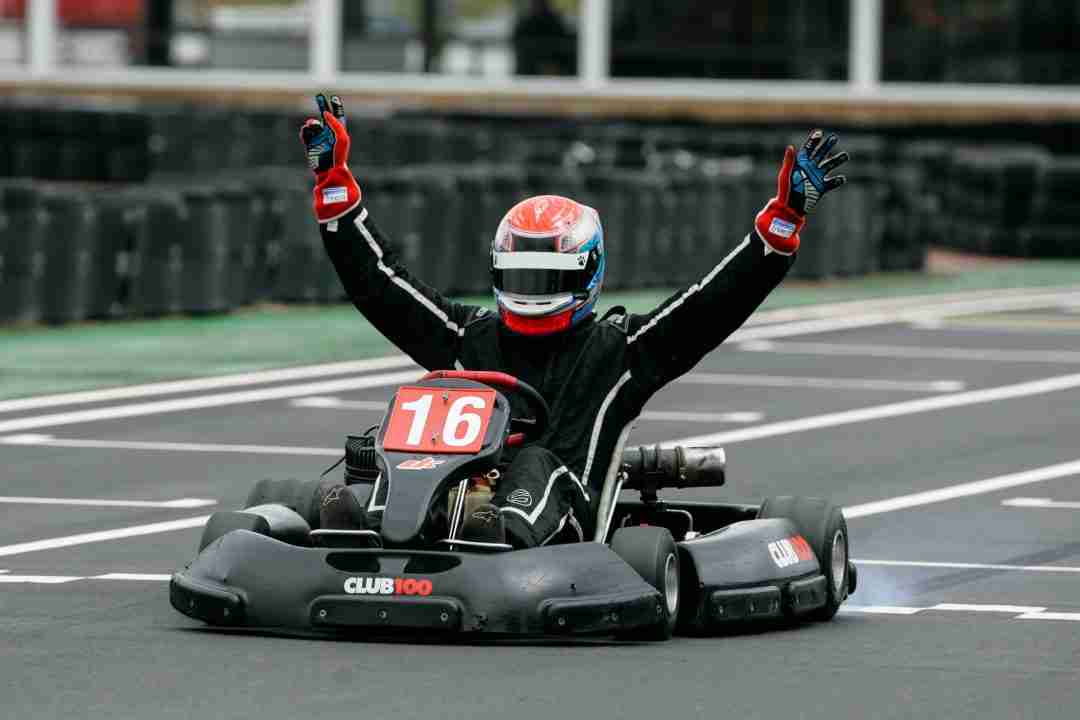 Round up In the Elites two wins in the last two Finals have really cemented Joe Holmes place at the top of the standings whilst Rob Newman and Ian Blake are tied for second on dropped scores. I really thought Ian was going to take the win at Ellough having been so dominant in the heats but it was not to be. Jay Elliott is fourth from Steve Brown. Reflections A very entertaining days racing despite the weather. We were pretty unfortunate to have a wet and windy day in the middle of a heatwave but I’m sure most drivers and spectators enjoyed the day. Sadly there were a couple of incidents which could have been very serious but thankfully no one got badly hurt. Whilst the weather certainly played its part it was sad to see a number of drivers not heeding the yellow flags. I would suggest that all drivers have a good look at the rules regarding waved and stationary yellow flags. In the incident involving the Lights one driver actually came upon the scene and weaved his way through the stationary Karts and drivers. With drivers out of their Karts and pusher karts on the scene a nasty situation could have been made much worse. Be aware drivers, raise an arm and back off a little. Also, some of the races got a little delayed as the grids formed up with drivers weaving to supposedly warm the tyres. Unfortunately, in doing so, they were preventing drivers from taking up their grid slots necessitating another rolling up lap. I think it’s dangerous. Aside from that it wastes time and I don’t believe it actually does any good. Finally thanks to all the officials and the staff at Ellough and to Double Dash Media who I’m told did a great job commentating and filming at Ellough. I’ve not watched it yet. It’s my Thursday treat after finishing the reports. Had to feel for the camera operators who were standing out in the rain and wind all day. At least the marshal’s have little huts! See you all at Lydd ! Words: Steve Gray Photography: Jack Mitchell, JAM Motorsport Photography
Scroll to Top
We use cookies to ensure that we give you the best experience on our website. If you continue to use this site we will assume that you are happy with it.OkPrivacy policy