Rob Moore on pole, returning after missing the last round to go on what turned out to be a record breaking holiday as he and his partner established a world record for the most photographs posted in a fortnight on Facebook. All good fun. Steve Brown was alongside with birthday boy and ace lens man Jack Mitchell on row two alongside Harrison Darvill. Peter Harris and GYG winner Rob Newman next from Harry Neale and Jack Harding. Good to see Jack back whilst David Longman and Ian Blake completed the first five rows. Moore led the field away but Brown was later on the brakes into the first hairpin and emerged at the front. He would not be threatened again. Moore ran second with Mitchell third. Behind these though it was all change. Darvill and Newman both spun out of contention whilst Harding got delayed and dropped back to eleventh. Brown continued to pull away at the front whilst Moore looked comfortable in second helped by Mitchell and Neale having a ferocious battle over third. Harris was next but soon to be passed by Longman. After a bright start Harris then fell away finally being classified second from last. Longman fared little better. After running fifth at two thirds distance he would eventually finish down in eleventh. As Brown and Moore continued to circulate at the front Mitchell and Neale put their dispute on hold for a few laps and immediately began to close in on Moore. With one to run Moore still had the place but Mitchell pounced into the first hairpin and Neale followed him through. Brown took the win over two seconds to the good with Mitchell second from Neale and Moore. Harding was next after a very feisty drive. Another lap and he might well have been fourth too. Steve Hicks was next. He too put in a strong drive. Having started from Grid sixteen he was up to eighth after a lap before dropping a couple of spots and then gaining places over the final laps. Joe Holmes was next taking valuable points after starting at the back. Daz Teal was eighth. Another returnee after missing a couple of rounds whilst Jay Elliott and Ed Barrs completed the top ten. 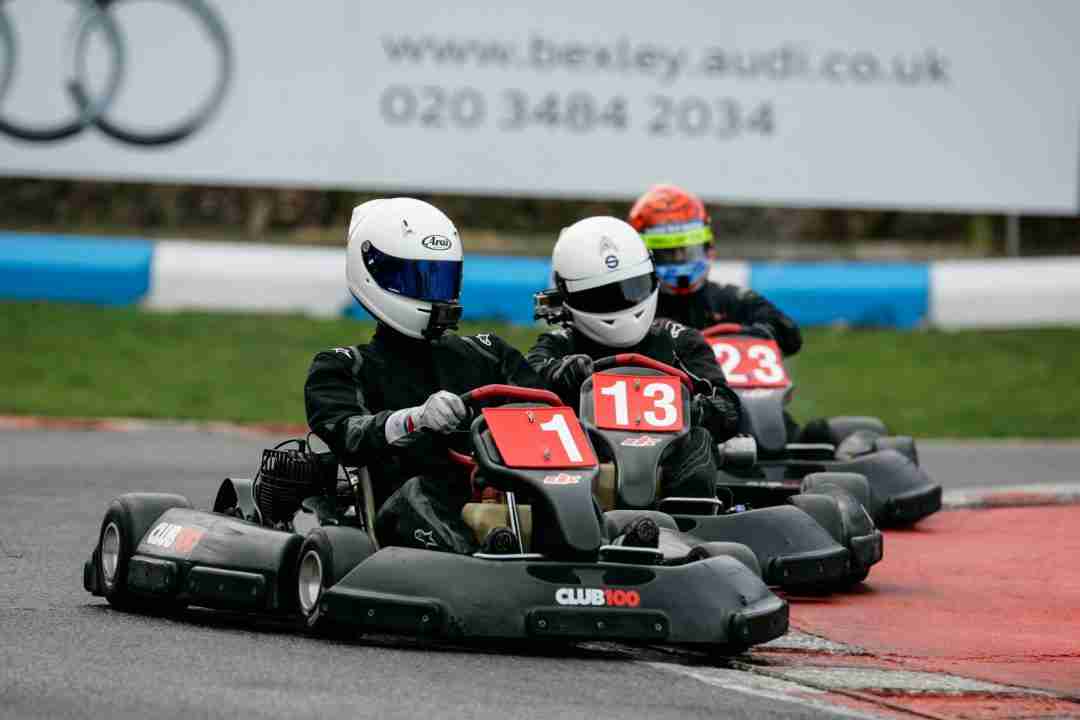 Blake on pole from Barrs with Elliott and Dan Truman on row two. Jack Bolton and Chris Dixon on three from Hicks and Holmes with Teal and Moore completing the first five rows. Blake got away cleanly from pole to lead into the first hairpin but Barrs and Truman both lost out as did Dixon and Holmes surprisingly losing places at the start. Moore spun out resuming dead last.
Bolton moved into third but the biggest first lap climber was a resurgent Teal rocketing up to fourth from grid nine. Brown too was an early riser climbing from grid eleven to seventh. Blake still led but Elliott was really on it and by the end of lap two had hit the front. Teal made short work of Bolton and quickly homed in on the leaders with Bolton now defending from Hicks. Elliott continued to lead chased hard by Blake and Teal whilst Bolton and Hicks continued to circulate a few Kart lengths adrift. But coming up quickly was Harding. Having started from the back row he’d worked his way through the field. It was not without incident though and a couple of times he was half off the circuit as the field swept towards Cafe corner. With four to go he’d made it to seventh ahead of Brown and Holmes. And not too far adrift of these was Newman who was beginning to come alive as the race entered the final stages. Penultimate lap and the front three were still circulating as one but behind these it was all change. Harding moved into fourth with Newman next having moved up six places in a couple of laps. And then it was all change at the front as Blake got the better of Elliott through the hairpins. Teal too slipped by but he’d clipped a cone and would be classified third. Harding crossed the line next but dropped a couple of spaces after penalties leaving Newman and Hicks fourth and fifth. Bolton was next from Brown, Holmes and Barrs whilst Teal set the fastest lap two from the end. 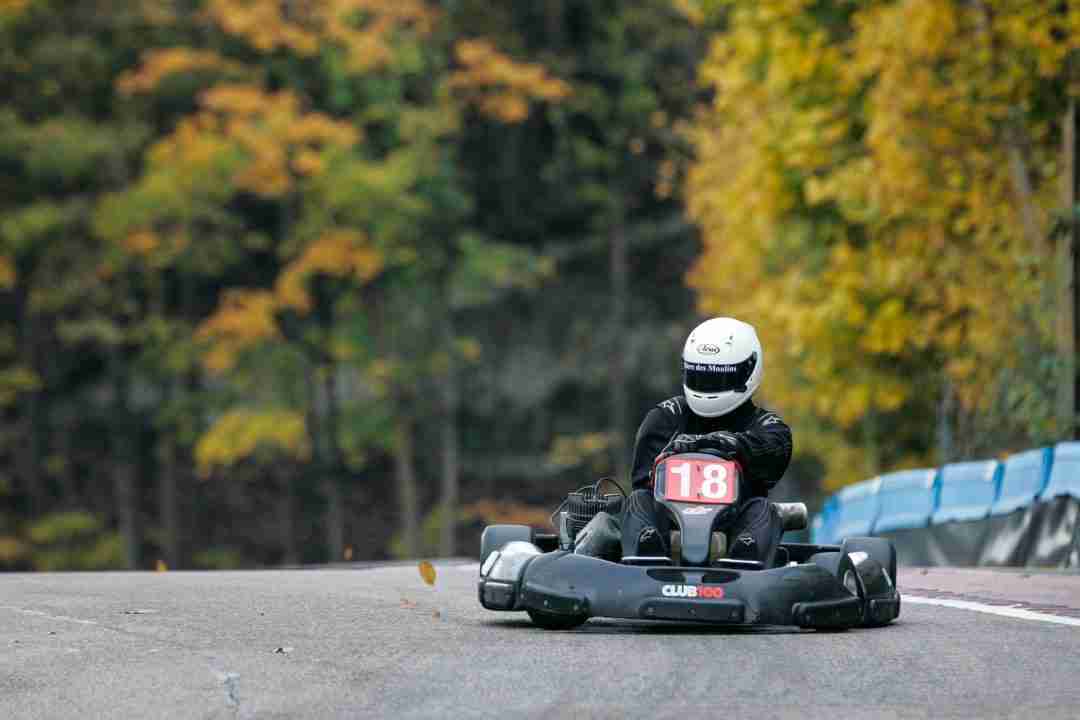 Longman on pole from Teal for the final Elite heat of the day. Harding and Holmes on two from Neale and Hicks. Row four, Newman and Dixon and Harris and Bolton completing the top ten.
A frantic first lap saw Longman drop to fourth with Harding first from Holmes and Teal. Neale lost out dropping to seventh and then losing a couple more spots over the next two laps. Hicks ran fifth. Harding led but Holmes was pressing him hard and moved in front on lap three. Teal closed in on Harding and slipped by just before half distance whilst Longman and Hicks circulated in fourth and fifth. Holmes immediately began to pull clear whilst Teal and Harding squabbled over second. Meanwhile Brown was closing in on Hicks. Having started from grid sixteen he’d made steady progress. That was as good as it got though. Holmes ran out the winner over a second up on Teal in second with Harding next. Longman held on to fourth ahead of Hicks with Brown having to settle for sixth but gaining valuable points. Newman, Neale, Barrs and Truman completed the top ten with Brown setting the fastest and establishing a new record. 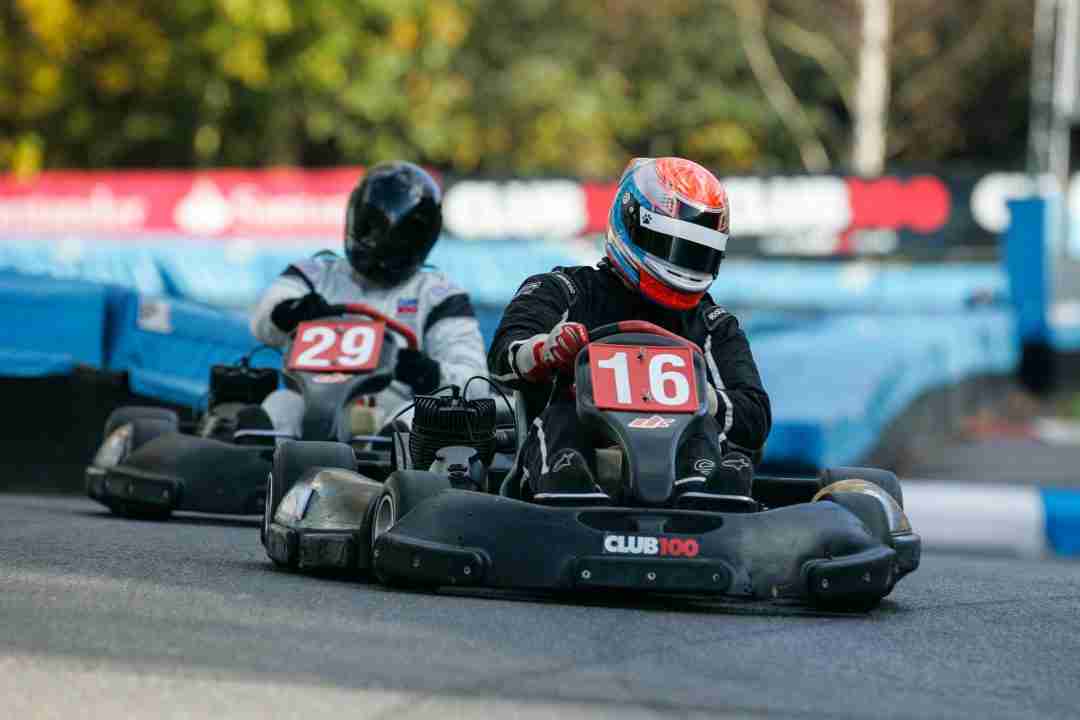 Teal on pole from Harding. Brown and Hicks on row two with Holmes and Elliott on three. Neale and Newman on four with Barrs and Longman completing the first five rows. Teal got away smartly but Harding lost out into the hairpins to both Brown and Holmes. Teal was flying over the opening laps opening up a lead of a few Kart lengths whilst Brown defended from Holmes. Elliott got by Harding for fourth. These two were fighting each other hard for the spot but falling away from third in the process. Holmes finally broke Browns resistance and set off in pursuit of the leader closing the gap by a tenth of a second each lap. Brown in third though was coming under pressure from Elliott and Harding who had settled down and closed in. Harding made it through and immediately began to pull clear as Elliott got held up by a defensive Brown. Teal then began to pull clear of Holmes but only for a lap as Holmes gathered himself up for another attack. Teal didn’t defend too hard reasoning that Holmes had the faster Kart and with two to go the Championship leader was at the front. Teal responded by setting his fastest lap on the final tour but it wasn’t enough as Holmes took the win just over three tenths to the good with Harding taking the final podium spot. Elliott took fourth ahead of a fast closing Newman who also took the Rookie honours. Starting eighth he’d dropped out of the top ten by the end of the first lap. It took him a couple of laps to climb back to eighth where he ran for much of the race before rising to fifth over the closing laps. Hicks was next up from Barrs with Brown next after a disappointing race. Dixon and Bolton completed the top ten. 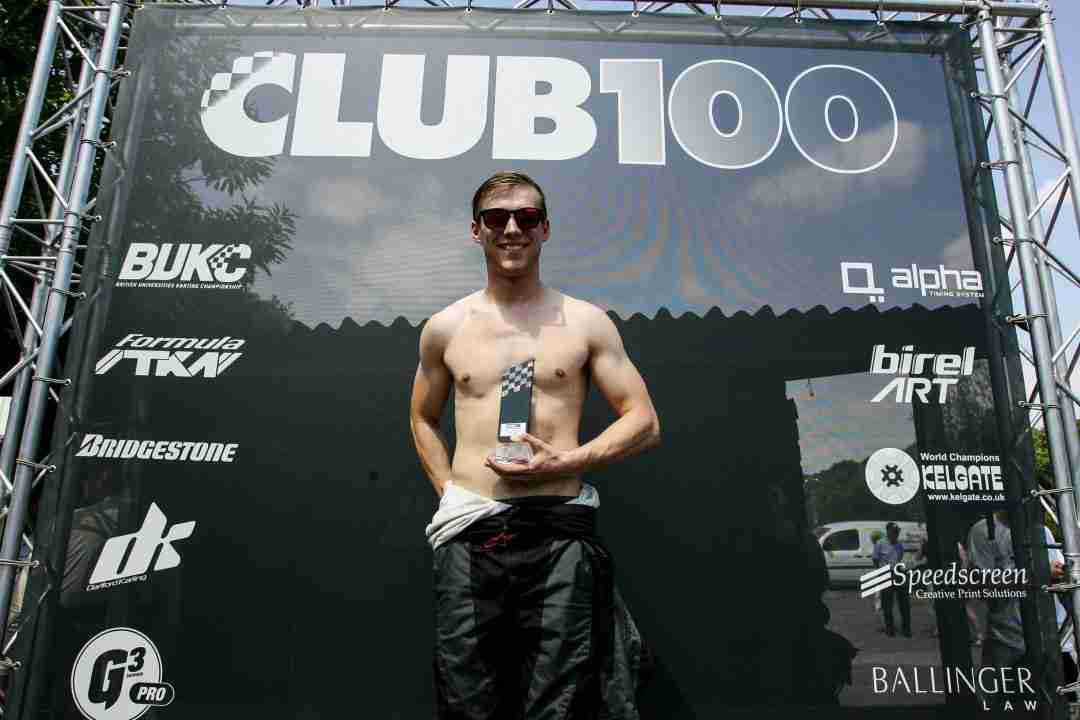 Joe Holmes first win in three races and his third of the season consolidates his position at the top of the Elite standings whilst fellow Yorkshireman Rob Newman lies second and leading Rookie. He’s just a point clear of Ian Blake who had a bad day at Buckmore. Jay Elliott is next from Steve Brown. There’s only a handful of points separating second from fifth. But can any of them break away and challenge reigning Champion Holmes?

Ellough Park is next up and it’s being televised so it’s a chance to be seen all over the world. Don’t miss out. Ellough is a great track and if drivers want to continue racing at a broad range of circuits events like this need to be supported.
Finally, Stuart Jones was missing from Buckmore having been taken ill. I’m unashamedly going to borrow a Facebook post from Ben Benneyworth who writes,
‘’I think it’s fair to say on behalf of Club 100, our thoughts and prayers are with Stuart Jones and his family after being rushed to hospital with Meningitis. I want wins and Championships like the next person but not at the expense of someone being taken to A & E. Get well soon mate.’’
And so say all of us. Get well soon Stuart.

See you all at Ellough !