I was talking to Paul Goddard prior to the race and, despite being a superheavyweight, he said he preferred to identify as a heavyweight. This got me thinking: In this day and age of equal rights and neutrality, I think identifying drivers by their weight is discrimination and from now on I would like to identify as a super heavyweight. The fact that I’m only 76kg is irrelevant and you are a bigot for disagreeing with me or having a different opinion. Furthermore, the term “super heavyweight” is derogatory and should be renamed as something more neutral.

So, a full grid of 35 fat bastards took to the track on the tight and twisty Red Lodge circuit. Titan’s Mike Philippou set the fastest lap to take pole. Petr Jankowski had looked rapid in practice and followed this up with the second fastest time in qualifying. Anwar Beroual-Smith and Andrew Hall Jr made up the second row, and Jack Noller and Tim Hill mad eup row three. The super heavyweight pole went to Alex Pritchard. Tarik Almou was a very close second. There was quite a gap to Damien Holmes, Stuart Kirk, Richard Allen and Andrew CHerry, who were all grouped together.

It was a nightmare start for the poor race reporter who had the three most difficult to spell names at the front. Mike Philippou led Anwar Beroual-Smith and Peter Jankowski off the line. Jack Noller was well up in fourth with Andrew Hall Jr right behind him. Alex Pritchard was the first of the super tubby boys and he was leading Tarik Almou.

Anwar took the lead at the end of the opening lap and built up a good half second lead. Steven Jennings was getting himself into trouble further back and was handed a penalty for ABC.

Over the next few laps, the leading group began to slowly break away. There was the usual midfield excitement with numerous karts running nose to tail and attempting overtakes on the notoriously twisty track. Christopher Turner, Daniel Russell, George Watson and Stuart Osborn were all batting hard. Behind them there was a tasty dice for fourth place in the super lardies between Andrew Cherry, Richard Allen and Richard Newton.

Back at the sharp end and Jankowski had despatched Philippou for second place. Noller was right behind Philippou and looking for a way past. Hall Jr had dropped back by a second behind this group and was coming under pressure from super heavyweight leader Lammin, and Tim Hill. Pritchard took Hall on lap 12.

As we approached half distance, Beroual-Smith had opened up a two and a half second lead. It looked like being a repeat of his Clay Pigeon effort. Jankowski was still being harried by Philippou, with Pritchard and Noller right in the mix.

The main players in the super heavyweight class looked pretty well sorted by half distance. Pritchard was way out in front and second placed Damian Holmes had a two second lead over third placed Almou. Richard Allen was nearly six seconds further back in fourth but there were several karts between them.

Over the last ten minutes, Beroual-Smith continued to extend his lead. Drama towards the end as Jankowski tangled with a backmarker who then ran into the chasing Philippou. Jankowski received a black flag for his trouble and Philippou lost a handful of places. This promoted Noller to second and Tim Hill to third.

There were no such worries for Beroual-Smith and he cruised home to an easy win. A grateful Jack Noller took second place and Tim Hill came home third. Noller’s second became a third courtesy of a one-place penalty for cone molestation.

Anwar made a good start and maintained his lead. Hill filed through in second and behind them Noller and Philippou fought over third place. Hill then lost out to Philippou and ended the opening lap in fourth. Damien Holmes led the super heavyweights, closely followed by Tarik Almou and Richard Allen. Philippou took Noller on lap four and Steve Bosley took Hill. Bosley was running extremely well in the early phase of the race and certainly had the pace to challenge for a top three.

Over the next few laps the leading group remained in single file, playing follow the leader in order to break away from the chasing pack. The running order remained unchanged for the next few laps with Beroul-Smith leading Philippou, Noller, Bosley, Hill and Steve Jennings. Tarik Almou took the super heavyweight lead from Damien Holmes and they had Richard Allen right behind them. However, lap six spelled the end of Almou’s race when he was handed a black flag for punting off Andrew Hall Jr. The sweary exchange between the two after the race suggested Hall Jr was less than pleased with the incident.

There were a number of contact warnings throughout the race, which is normal at this annoyingly fiddly track. The midfield was as close as ever with Alex Lammin, Peter Jankowski, Chris Turner, Stuart Osborn and George Watson all battling hard. Likewise, Steve Lindley was in a close battle with Gerard Moore who was recovering after an earlier black flag.

Back with the leading group and Anwar Beroul-Smith was having a much more difficult time maintaining his lead. The on-form Mike Philippou was right up his exhaust pipe. He was himself under pressure from Jack Noller. The leading quartet were in a very intense dice by lap 12 and a number of passes and repasses were made between Noller, Philippou and Bosley. Lap after lap they swapped places, all the while putting pressure on the race leader.

Things were less intense in the super heavy class. After Almou’s penalty, Damien Holmes found himself comfortably in the lead. Richard Allen was pretty much on his own in second, surrounded by a handful of only moderately portly drivers. Alex Pritchard was third and, again, some way in front of fourth placed Richard Newton.

By half distance the battle at the front had calmed down somewhat. Beroual-Smith was still leading and Philippou had once again settled into second. Noller was third but lap 19 saw him lose out badly and drop five places to eighth. This promoted Hill back up to third and Bosley to fourth. Jennings was running well in fifth and Peter Jankowski was having a great recovery drive and was up to sixth. However, he was given another penalty for ABC which would ultimately affect his finishing position.

Alex Pritchard nailed Richard Allen for second in the super heavyweight class on lap 29. A few laps later and Steve Jennings did the same to Tim Hill, taking third with just over two minutes of the race remaining.

Despite having been under constant pressure from Philippou for most of the race, Anwar Beroual-Smith held on to take yet another win. An epic last lap pass saw Steve Jennings snatch second from Philippou. Tim Hill, Daniel Russell and Jack Noller all crossed the line within a few tenths of each other.

Another double win saw Anwar Beroual-Smith take a decisive victory. Tim Hill was a fine second and Mike Philippou taking the final spot on the podium in third. The super heavyweight win went to Damien Holmes. Richard Allen and Tarik Almou finished second and third respectively. Despite another poor day, Andrew Hall Jr still leads the championship. He was obviously helped by Stuart Martin and Matt Edmondson-Jones not racing today but it sees an interesting championship showdown at Buckmore in three weeks. 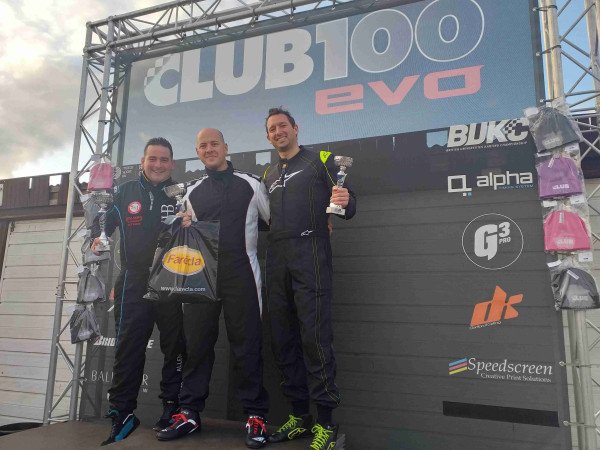 Enjoyed this race report? You’d probably enjoy my books then.