Could The Institution Of Marriage Prove To Be Ian Blake’s Championship Masterstroke?

Ian Blake led the field away clearly none the worse for his honeymoon but it was Tom Dix who immediately caught the eye moving into second from fourth on the grid at the expense of Ray Norris and Tyler Mays. Ben Yarwood slipped back behind a fast starting Jack Harding whilst Pete O’Connor held station in seventh defending hard from reigning Champion Steve Brown the latter looking to re-ignite his season after a disappointing round at Ellough. Blake continued to lead pursued by Dix with Harding now into third ahead of Norris and Mays with Brown now up into sixth and challenging Mays. Unfortunately coming out of the Horseshoe at the end of lap two Brown got squeezed on the inside and spun to a halt. A racing incident. Down the order Yarwood found himself spinning down the order whilst Joe Holmes was making rapid progress moving up from grid twelve. Not as rapid as Edward Barrs though. Having started dead last he was into the top ten by half distance and would set the fastest lap at three quarter distance. 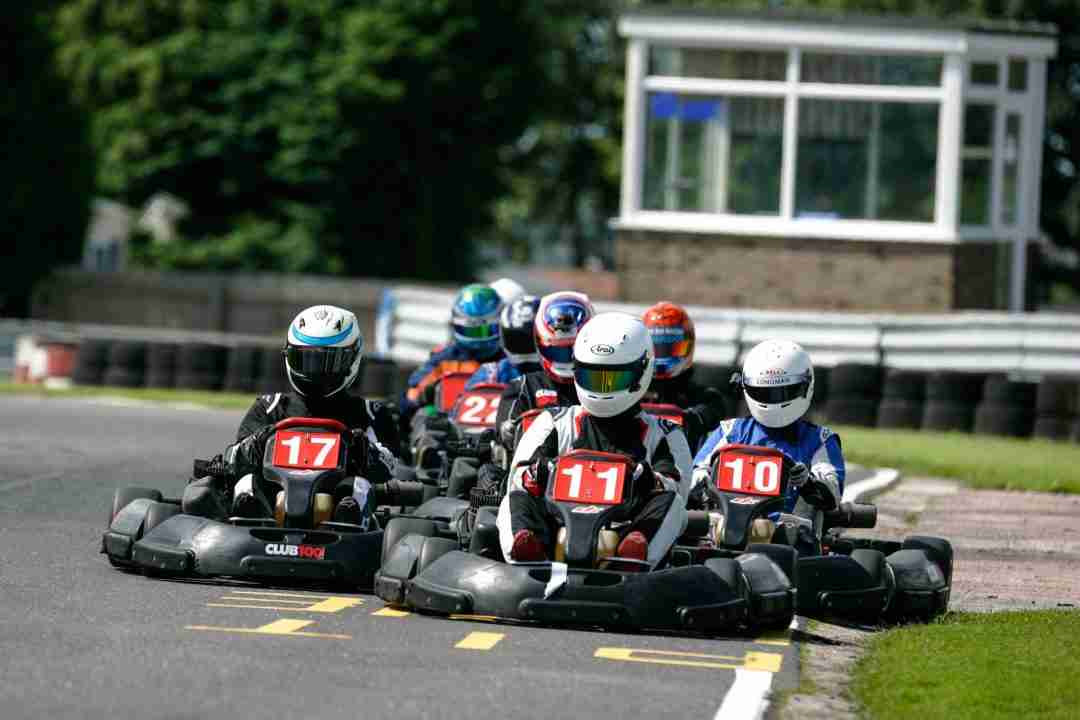 Blake continued to lead but Dix was pushing him hard and at the halfway mark moved ahead. Not for long though. A lap later and Blake was back at the front but looking very ragged as he defended the place. With two to go he finally succumbed to the pressure and spun away his chances leaving Dix to take the win from Harding with Norris third. Holmes took fourth just holding off the flying Barrs with O’Connor sixth from Jay Elliot who had staged something of a recovery having dropped to thirteenth in the early laps. Brandon Williams, Dan Healey and David Longman completed the top ten.

Jonathan Lisseter had pole for this one and was hoping for a clean run after his first heat demise. Joe Holmes was alongside and it was he who got the better start to lead the field down the straight and into Billy’s Blind. James Hattersley was third but he made a poor getaway and would be fifth by the end of the first lap behind Daz Teal and Stuart Martin. Holmes began to open up a gap from Lisseter who was being harassed by Teal. Healey was on something of a charge but was just a little too feisty in his efforts and would suffer a four place deduction at the end of the race. Hattersley meanwhile fought back into fourth but not for long as he began to fall back down the order. He would later complain of a down on power Kart. From fourth at the end of the second lap he would eventually come home nineteenth and last.

Holmes meanwhile continued to pull away at the front whilst the battle raged behind with Lisseter holding off Teal and Healey. Blake was next up having moved up over the first couple of laps from grid ten. He could make no impression on the front runners though but he was well clear of Truman. Holmes took the win almost six seconds to the good with Lisseter second from Teal. Healeys demotion promoted Blake to fourth ahead of Truman. Elliot was next ahead of Harding. Good drives from both moving up from grids seventeen and fifteenth respectively. Healey was classified eighth with O’Connor ninth. Another good performance moving up from grid sixteen. Martin completed the top ten.

Williams led the field away from pole but Brown got the better of Barrs to move into second with Elliot also getting by Barrs to move himself into third. Healey, from grid four, was caught out at the start and dropped to sixth by the end of the first tour. Life didn’t get any better for him either as he gradually slipped down the order to thirteenth after just five laps. Longman was an early spinner dropping to the rear of the field whilst Blake, starting nineteenth and last, was up to eleventh by the end of the first lap. Williams continued to lead but it was Elliot now in second with Brown third from Barrs and O’Connor with Dix in sixth having started on grid eleven. Half distance and Williams was having to defend hard from the chasing Elliot with Brown a couple of Kart lengths back. Dix slipped by O’Connor for fourth with Blake now up to sixth and closing in. Healey meanwhile had gathered himself together and was staging a mini recovery. 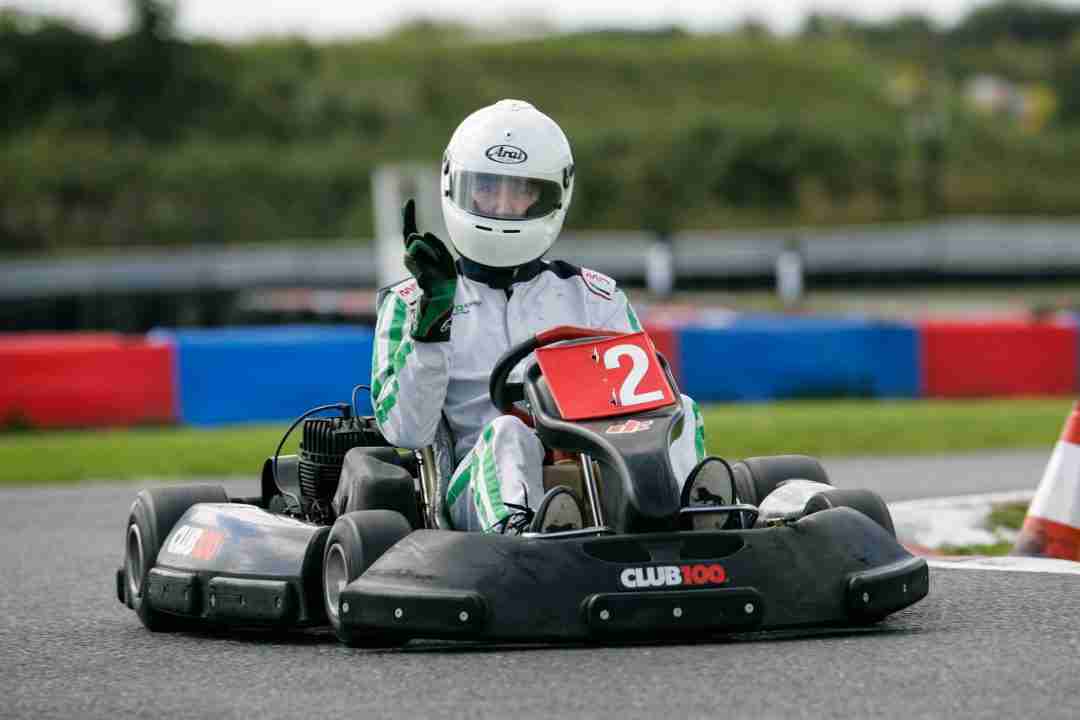 At the front Williams was defending for all his worth against Elliot whilst Dix made it by Brown for third. O’Connor followed him through demoting Brown to fifth but a lap later he was back into fourth with Blake also getting by O’Connor. At the front Elliot finally made it by Williams for the lead and there he stayed to the flag taking the win by just over three tenths. Dix took third with Brown fourth. Another lap and he might have been taken by Blake who was closing in rapidly towards the end. O’Connor had to settle for sixth with Barrs seventh whilst Healey took eighth but some distance adrift of Barrs. Teal and Holmes completed the top ten.

Jay Elliott was on pole from Joe Holmes with Tom Dix and Jack Harding on row two from Pete O’Connor and Daz Teal whilst row four saw Ian Blake and Dan Healey side by side ahead of Ray Norris and Brandon Williams. Elliot and Holmes led the field away but it was Dix who made the better start to lead at the end of the first lap. Blake was another to make a smart getaway and he was up to fourth by the end of the lap at the expense of Harding, now down to sixth, O’Connor, static in fifth and Teal, down to seventh. Healey dropped a spot whilst Norris, Lisseter, Barrs, Mays and Hattersley all had first lap dramas delaying themselves badly. 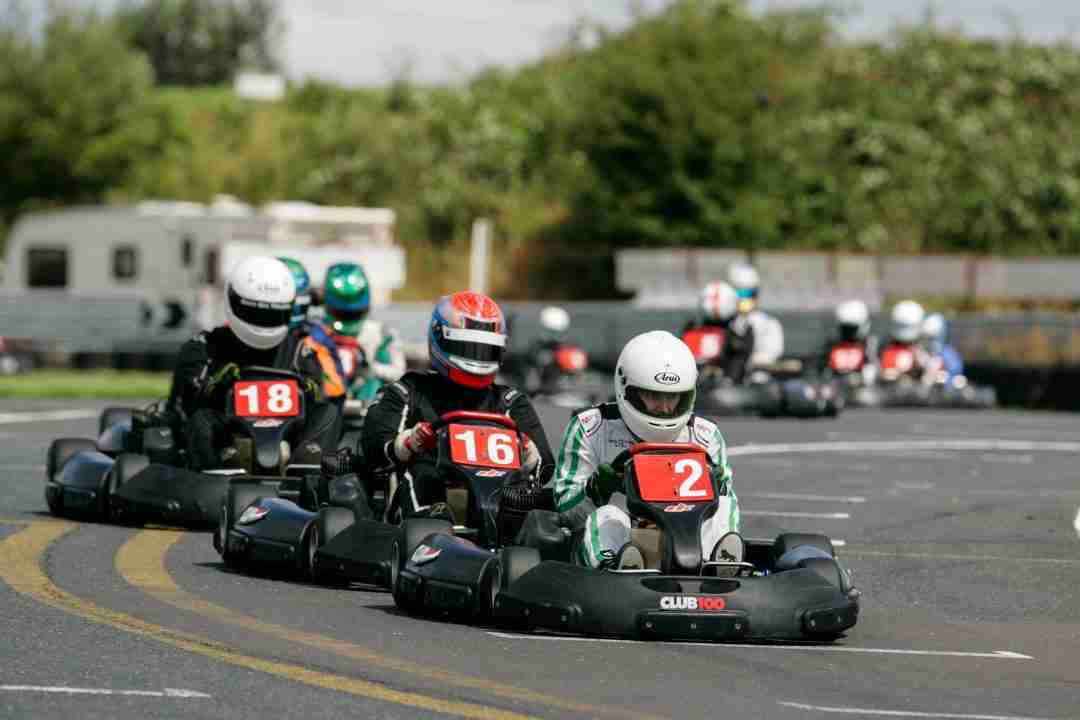 When Norris got going he was travelling down the straight at diminished pace and looking over his shoulder. There were those who thought he was looking to seek retribution for some perceived slight. But that’s not what Club 100 drivers do. He waited for Lisseter to catch up and then the two of them went racing. And a great scrap it was too, and all over fifteenth. Both these drivers are well capable of running at the front. Perhaps a little less over indulgence on a Saturday night? Still, if they enjoy it! Meanwhile at the front Dix continued to lead but Holmes was back into second with Blake now into third and Elliot dropping to fourth whilst O’Connor remained fifth. Dix continued to lead but he couldn’t break the tow and wasn’t getting away. Indeed it looked as though anyone out of the top ten might get a shot at the front. Half distance and Blake made it through to the front whilst a lap later Holmes made it into second as Dix fell back behind Elliot and O’Connor. Then Holmes moved into the lead but only for a lap as Blake fought back to take the place at the top of the circuit. Holmes ran a little wide and lost a little bit of momentum allowing Elliot back into second and O’Connor up to third. A lap later and O’Connor was up to second. The place was short-lived however as a lap later he’d dropped to seventh with Holmes back into second ahead of Elliot, Harding, Dix and Williams. All this fighting over second was allowing Blake to get his head down and pull a gap. With one to run, barring incidents, the race was his but Elliot fought back past Holmes for second whilst Harding demoted Dix from fourth at the first corner. Sadly he’d made the move from just a little too far back and hit Dix pod to pod. Although Dix kept it on the track he was instantly passed by Williams and O’Connor and dropped to seventh. 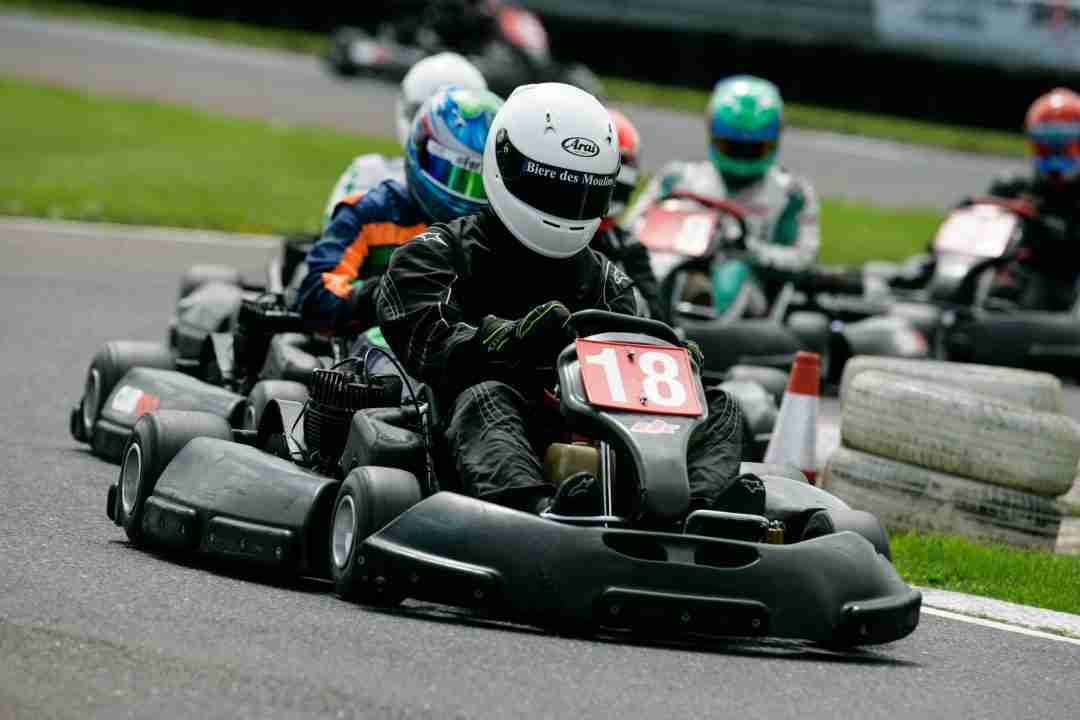 So Blake took the win from Elliot and Holmes. Harding crossed the line fourth but was demoted four places after the incident with Dix thus handing the place to Williams with O’Connor fifth. Dix was promoted to sixth ahead of Teal and the demoted Harding with Brown ninth. Fourth to ninth was covered by just seven tenths. So close. Healey took tenth. A disappointing result after his heroics at Ellough possibly but it was a good battle between him, Martin, Yarwood and Longman with the four of them covered by less than a tenth! Truman was next up well clear of the dicing Norris and Lisseter with Barrs a little further back but well clear of Hattersley and a lapped Mays.

Despite finishing third Joe Holmes retains the lead in standings and increased the gap to second placed Steve Brown. Joe was disappointed with third but accepted that it was still good points for the Championship. With two wins at the first two rounds reigning Champion Steve Brown looked as though he would run away with the honours this year but his form has dipped. He’s not been on the podium since round three. I’m sure he’ll be back. 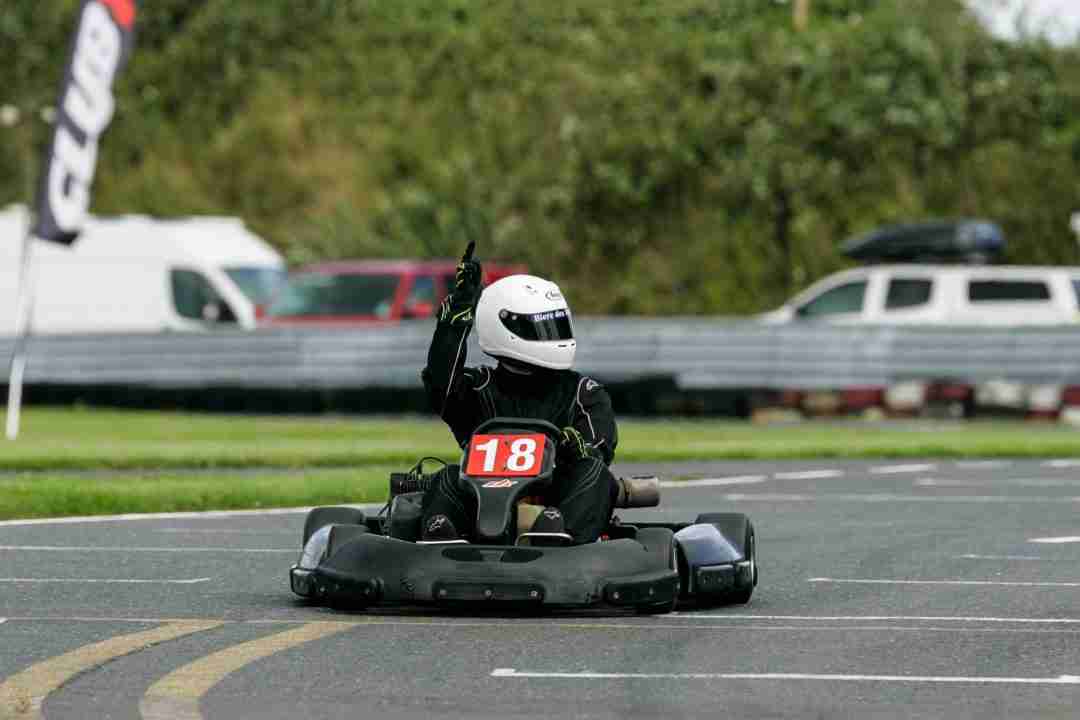 Ian Blake’s second win of the season puts him third. He reckons married life has given him a couple of extra tenths. Jay Elliot is fourth. He’s yet to stand on the top step this season but can’t be discounted. Jack Harding is fifth and not out of the running by any means.

Another great days racing at Clay and fortunately, despite the forecast of rain it stayed dry. The Championships are really starting to warm up and its going to a great second half to the season. Roll on Lydd !