Darri Simms was his usual self before the start, totally lacking in confidence. And then going out and smashing the record recording a 40.921 on his second flying lap! A time that was quicker than anyone in the Clubman class or Elite class and three tenths up on anyone else in the group. Astonishing. Next up was Freddie Fincham who just held off a very determined Matt Rainbow having his first ever drive in a Club 100 sprint event. One to watch. 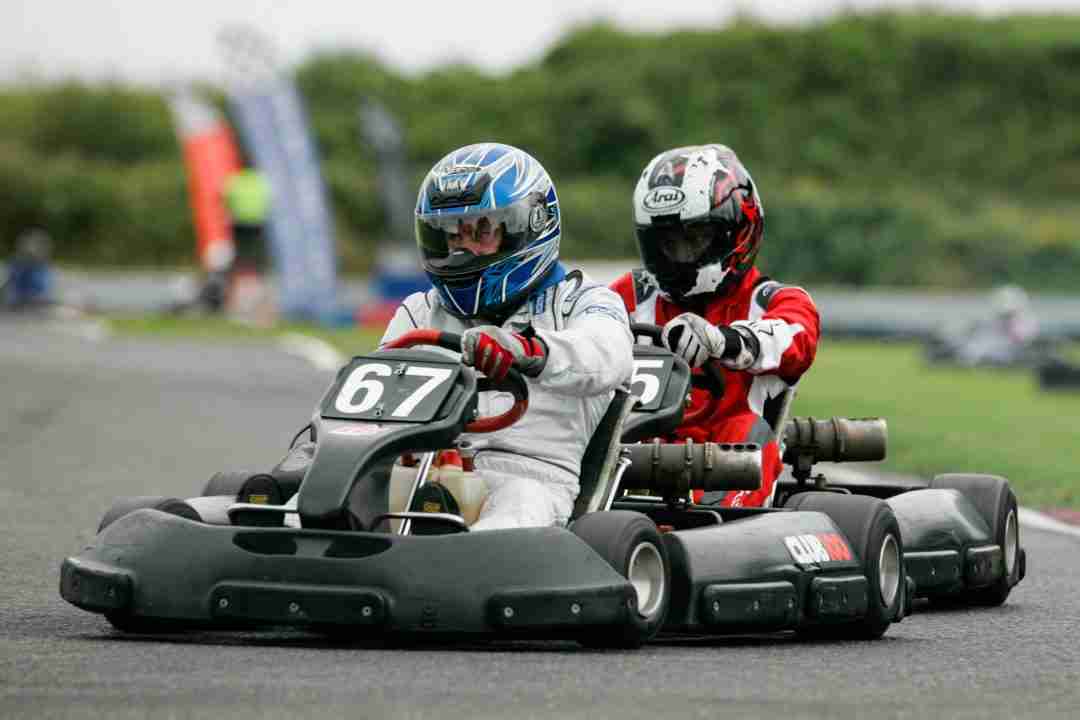 Could anyone take the fight to Simms? James Venning came closest setting his best time with 41.198 on the very last lap and just getting the better of Jon Watkins by 0.079. Interestingly Watkins was quickest in sectors one and three but must out on two. Lee Norris was third fastest. Again the times were close but not as close as the first group.

Pole for the flying Cornishman Simms with Venning alongside ahead of Watkins and Fincham. The hugely impressive Rainbow on row three from Bell followed by Wheeldon and Norris on four and Cochrane and Nash on row five. Simms brought the field round to the start and by the time they were approaching Billy’s he had already pulled a gap. By the end of the lap he was already three tenths up on second placed Venning. 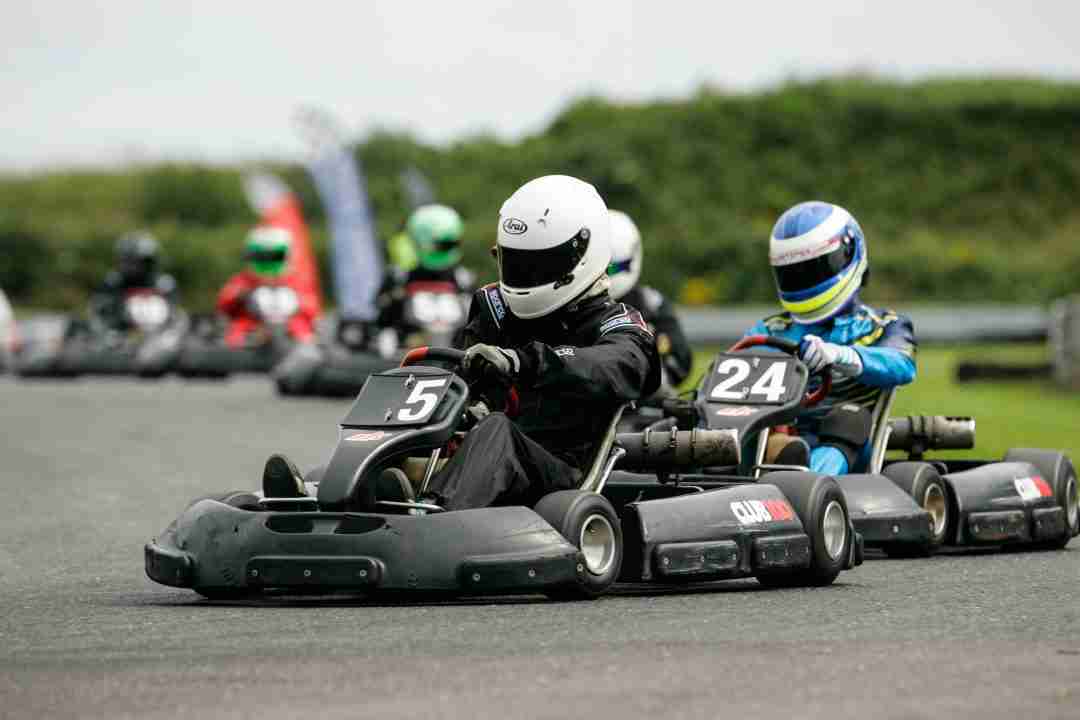 The first lap scramble saw Watkins pushed down to third whilst Fincham dropped to fourth. Rainbow got badly impeded round Billy’s and through the chicane and would find himself down to twelfth by the end of the lap whilst Nash kept himself out of trouble and rocketed up to third! Simms continued to pull away at the front but Venning was coming under pressure for second from Bell, Nash, Fincham and Watkins. One third distance and Nash was down to sixth and Watkins into second ahead of Bell and Fincham having taking advantage of the latter two holding each other up in the heat of battle and running wide. Coming into contention at this point was Sammy Venables who had made steady progress up from grid twelve. And closing in on him was Cochrane It was all getting a bit frantic for second and as Bell made a move on Venning for the place, which didn’t come off, Fincham took full advantage to take the place. It all got a messy then and Nash tagged Watkins spinning him to a halt. As drivers took avoiding action it allowed the front runners some breathing space. 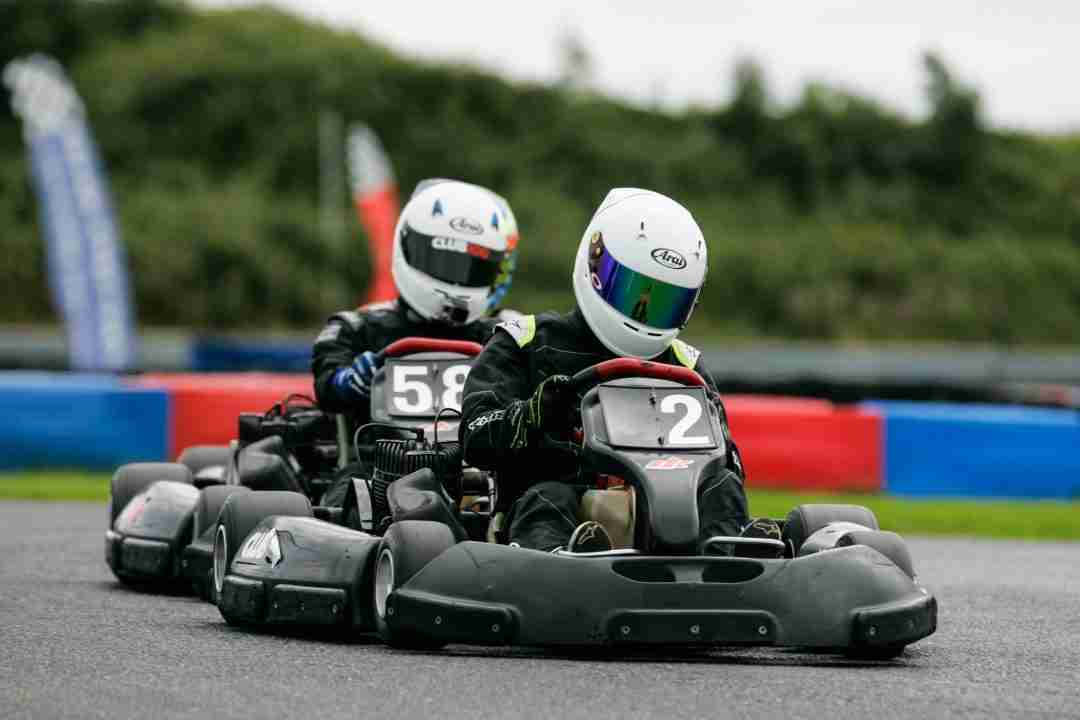 Simms duly took the win over five seconds up the road from Fincham who then found himself docked a position for cone abuse promoting Bell into second. Fourth across the line was Cochrane but he was carrying a penalty for gaining a place through contact and would be classified sixth. Nash then took fourth ahead of Rainbow who did well to fight back after his first lap drama. Bobby Dawes was seventh, Norris eighth ahead of Venning. Having run second early on he got shuffled down to eighth before fighting back to fifth only to drop back again over the final few tours. Venables would have been tenth but his six place deduction put him down to sixteenth. Simms set fastest lap.

Championship leader Simms on pole from Watkins with Cochrane and the well supported Fincham alongside. It was great to see the flags being waved on the club house balcony for “Fast Freddie’’. Nash and Roberts on row three from Norris and Noon with Venables and Dawes completing the first five rows. Simms got away cleanly from pole but it was Cochrane on his tail as they streamed down towards Billy’s for the first time. Fincham and Nash in third and fourth as Watkins dropped to fifth. Down the order Venning and Hobbs had both spun to a halt. 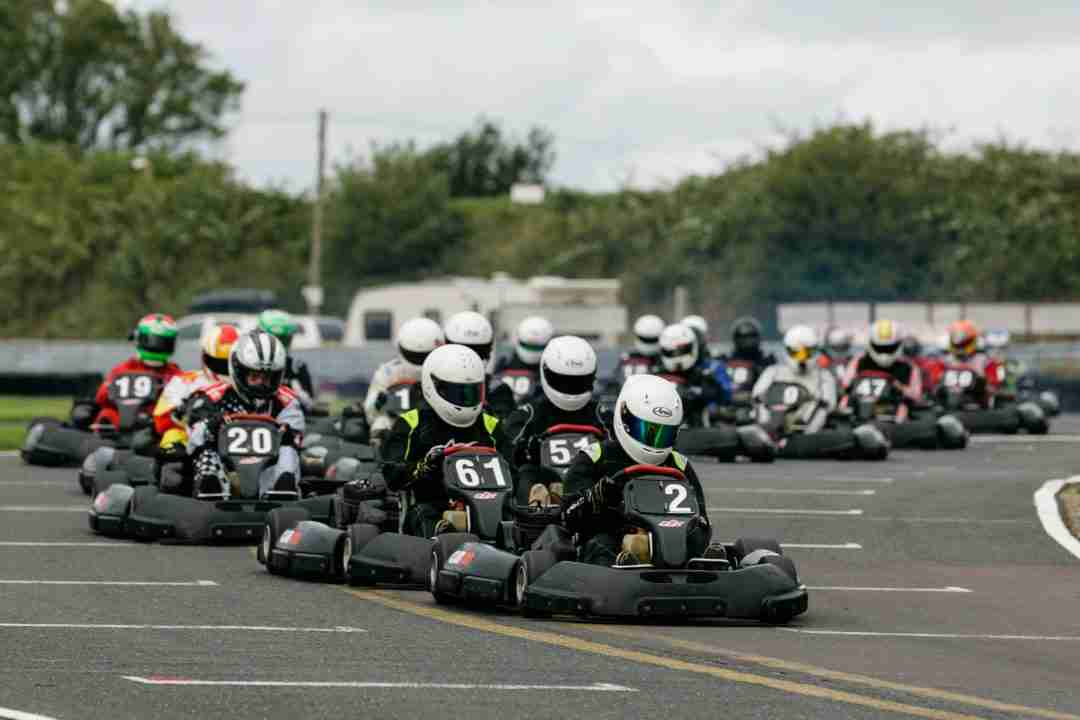 Simms and Cochrane both got their heads down and began to pull away from the battle raging for third spot between Fincham, Nash, Watkins and Noon. Cochrane was never going to be content with second and began to close right up to the leader as they raced down the finishing straight. At this stage Simms was just a little slower out of the top corner onto the straight allowing Cochrane to close in but Simms was quicker through the chicane and down the back straight. It was absorbing stuff. Finally Cochrane made a move down the inside into Billy’s but ran a little wide and Simms was back through. Next lap he tried again but on the second apex before the chicane pushing Simms wide. Contact was made and on the exit of the chicane Cochrane immediately gave the place back. Quick thinking to avoid a penalty and proper sporting behaviour. And also a show of supreme confidence as he had clearly worked out how he would make the pass stick. Next lap he got alongside on the run down to Billy’s. He was on the outside running into the braking zone but he forced Simms to go very narrow into the corner and as Simms ran a little wide Cochrane used the cut back to pull ahead. It was a well planned and executed move. Simms fought back a lap later going down the inside into Billy’s but again Cochrane kept him very narrow into the corner and Simms overshot allowing Cochrane to remain in front. It also allowed him to pull out a couple of Kart lengths. Behind the battle for third continued to rage on and now we had just a hint of rain in the air. 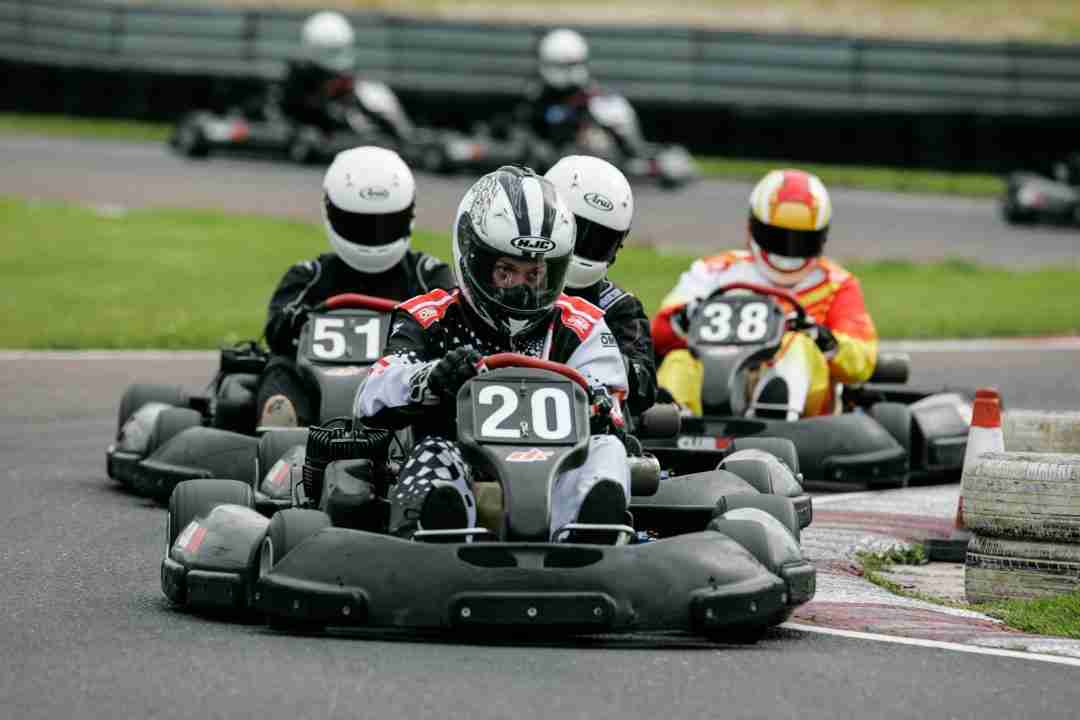 All day the grey clouds had rolled across the circuit from the west but they had begun to sink lower and turned just a bit greyer. But the rain held off. Nash continued to run third and had managed to break the tow as Fincham, Watkins, Rainbow and Noon fought over fourth. At the front Simms clawed back the lost ground to Cochrane but just couldn’t quite get close enough under braking to force his way by. At the flag he was just a tenth away. A great battle and Cochrane’s second Final win in a row. Hopefully he will be doing the remainder of the season. Nash took the final podium spot with Watkins fourth from Fincham. Rainbow was sixth. A very impressive Club 100 Sprint debut. Noon was next from Leslie and Dawes whilst Atkinson crossed the line tenth but penalised down to sixteenth allowing Algieri into the top ten. An overlooked drive this after starting twenty fifth he made steady progress. Cochrane set the fastest lap.

Darri Simms continues to lead the way from Christopher Bell whose challenge has faltered over the last couple of rounds. Sam Nash is third from Liam Cochrane the latter having already missed three rounds. He’s won two out of the three he has contested and hopefully will be around for the rest of the season. His win at Clay owed as much too mental strength as it did to driving skill. Freddie Fincham is fifth. 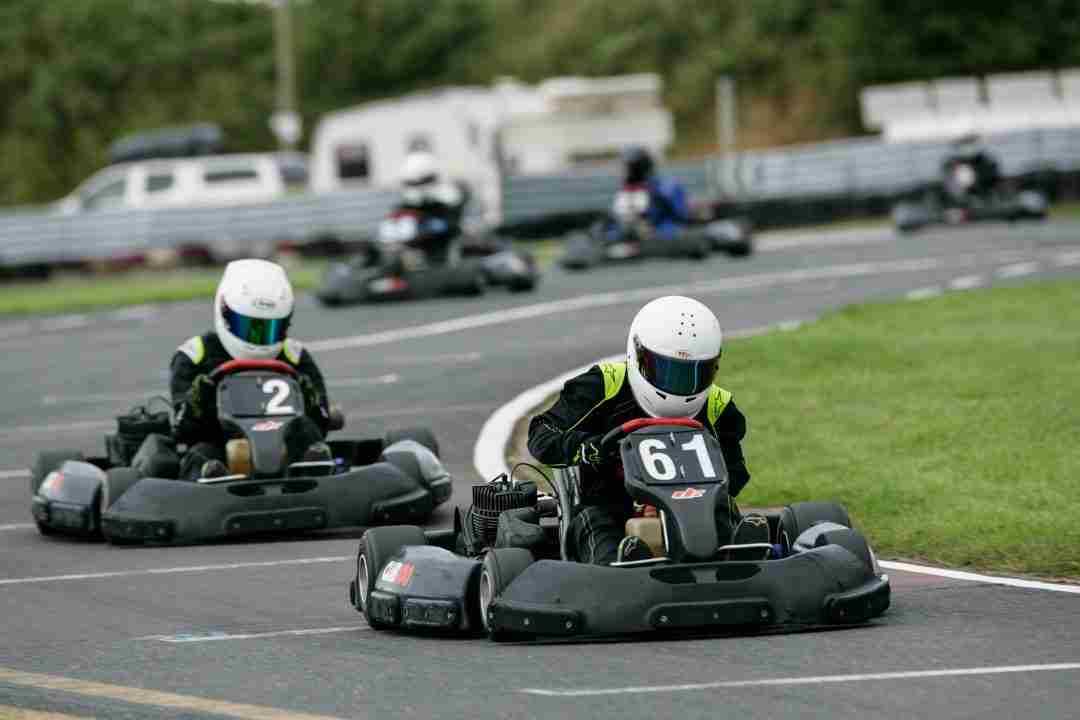 Another great days racing at Clay and fortunately, despite the forecast of rain it stayed dry. The Championships are really starting to warm up and its going to a great second half to the season. Roll on Lydd !