Battle of the heavies begins

A new era of Club100 racing began at Buckmore Park with the new Rotax formula. The new Sprint 60 series proves to be an interesting and exciting new championship and will reward consistency over balls-out banditry. The drivers who can combine the aggression of sprint racing and the finesse and tactical mentality of endurance racing will be the ones who emerge on top. And those who aren’t complete muppets obviously. Qualifying Matt Edmondson-Jones claimed pole position with a margin just over five hundredths of a second ahead of veteran Stuart Martin. Calum Jones was third ahead of another old name in the form of Steve Jennings. Andy Hall Sr and Jack Noller were next up and then came the oldest name of them all in the form of reigning Heavyweight sprint champion Tim Hill. In the super heavyweight class, Richard Allen was fastest in tenth place with Chris Dean slightly disappointing in fourteenth but second of the pie eater brigade (am I allowed to say that?). Damien Holmes was third fastest with Paul Goddard and Alex Pritchard next up in fourth and fifth respectively. Race 1 Edmondson-Jones led from the pole with Stuart Martin snapping at his heels right from the outset. Calum Jones lost out on the opening lap and was bumped down two places by Jennings and Hill. Richard Allen made a great start to move up four places and maintaining his super heavyweight lead over Paul Goddard, who had nipped past a cautious starting Chris Dean. Lap three saw a change of lead as Martin slipped down the inside of Edmondson-Jones. These two remained nose to tail for the next few laps as they built a cushion over Tim Hill and Andrew Hall Jr who were in a close battle. Hall managed to get past the reigning heavyweight sprint champ and was followed by the recovering Calum Jones. Further down the field it was extremely close. Chris Dean had managed to take the lead in the horizontally challenged class from Richard Allen. Paul Goddard had been shuffled down the order and Tarik Almou was now running third. In the midfield, Steve Lindley, Stuart Osborn, George Watson, Chris Turner, Alexander Lammin and Alex Pritchard were all running in a train. By half distance, Martin had opened up a gap of around half a second over Edmondson-Jones. Hall Jr was running on his own in third place ahead of Calum Jones who had recovered after falling back at the start. Jennings, Hill and Jack Noller were now in a three way battle for fifth. In the lardy class we lost Alex Pritchard after an incident but Chris Dean was opening up a solid lead over his rivals. As the leaders began working their way through the traffic, Martin’s lead was whittled down and Edmondson-Jones managed to get back past in the chaos. With the bit now firmly between his teeth he edged out a gap of over a second before encountering more traffic. Over the last couple of laps, Martin edged closer but it wasn’t quite enough and Edmondson-Jones took the win by less than a second from Martin. Hall Jr finished a solid third. However, it emerged that Stuart Martin had violated a cone in his pursuit of the leasd and was given a one place penalty, promoting Hall to second. Chris Dean won the blubbery class by three seconds from Richard Allen. Tarik Almou was third on the road but a penalty for cone abuse dropped him to fourth behind Damien Holmes. 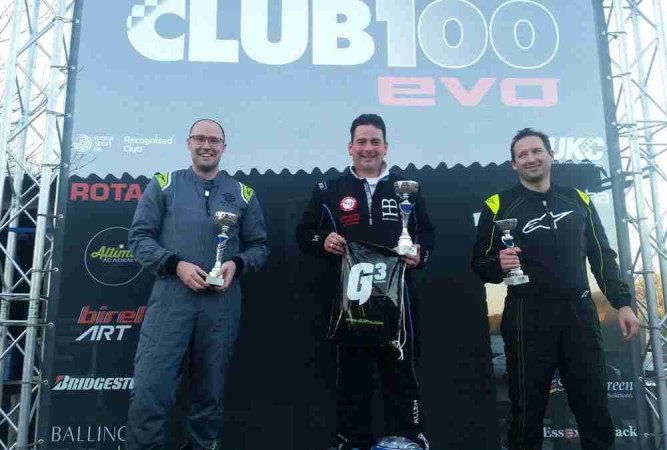 Race 2 His win in the first race gave Edmondson-Jones pole for race two. He led off the line and was followed through by Stuart Martin. Hall Jr suffered from being on the outside and dropped from second to fifth on the opening lap. Tim Hill and Calum Jones once again found themselves fighting over the same bit of tarmac and this time they had Hall Jr to content with as he attempted to recover from his poor start. These three exchanged places a number of times over the early laps. Jack Noller was right behind them with the leader of the portly brigade, Richard Allen, right on their tail too and showing another great turn of speed. Chris Dean was once again second in the big boy class with Paul Goddard third and once again fending of the impressive Tarik Almou. Edmondson-Jones maintained a slender gap over Stuart Martin in a repeat of race one. Lap 14 saw Andrew Hall Jr get past Calum Jones for third as he continued his recovery drive. Tim Hill was nearly two seconds behind this group and was coming under pressure from the dueling Noller and Allen. The midfield battle was again extremely close. Phil Kendall was leading a long train of karts of Ross Blackwood, Daniel Russell, Jon Wort, Paul Mason, Phil Turner and Andrew Cherry. Given the closeness of the field, the driving looked relatively clean from where I was perched (mostly at Symes Sweep waiting to get back in a kart). Back with the leaders and they were still embroiled in a fierce duel for the lead. A move by Martin on lap 15 allowed the chasing pack to close right in and, with the addition of some very slow backmarkers, their two way battle for the lead suddenly became a four way battle. Edmondson-Jones got back into the lead four laps later and Martin found himself under pressure from Hall Jr and Jones who both demoted him. Hall Jr was now flying and slid past Edmondson-Jones into the lead. By contrast, Martin slid down the order to seventh behind Noller, Hill and the rapid leader of the tubby brigade Richard Allen. Chris Dean was in eighth overall and some several seconds behind but well established in second best chubster. After a few ding dong moments, in the last ten laps, Andrew Hall Jr managed to hold off Edmondson-Jones to take the win on track. However, in his eagerness, he molested one of the cones and was awarded a one place penalty which handed the win to Edmondson-Jones. Calum Jones came home third and Tim Hill managed to take Richard Allen on the last lap to claim fourth. Allen’s fifth was enough to give him the big boy win ahead of Chris Dean. Alex Pritchard just managed to stave off Paul Goddard to take third. Final Result Two wins out of two gave Matt Edmondson-Jones the overall win. Andrew Hall Jr took the runner up spot with some feisty drives. Calum Jones beat Sir Tim to third by a small margin but it was a great performance by all the heavyweight drivers. This looks set to be an exciting year. In the Falstaffian class, Richard Allen took the honours by a point from Chris Dean. Tarik Almou took the final spot on the podium, beating Paul Goddard. Had it not been for a poor second race, Alex Pritchard could well have been right up there. Still, there’s still ten more races to go…
Scroll to Top
We use cookies to ensure that we give you the best experience on our website. If you continue to use this site we will assume that you are happy with it.OkPrivacy policy