And Didn’t He Love It. James Taylor Putting Canvey Back On The Map! 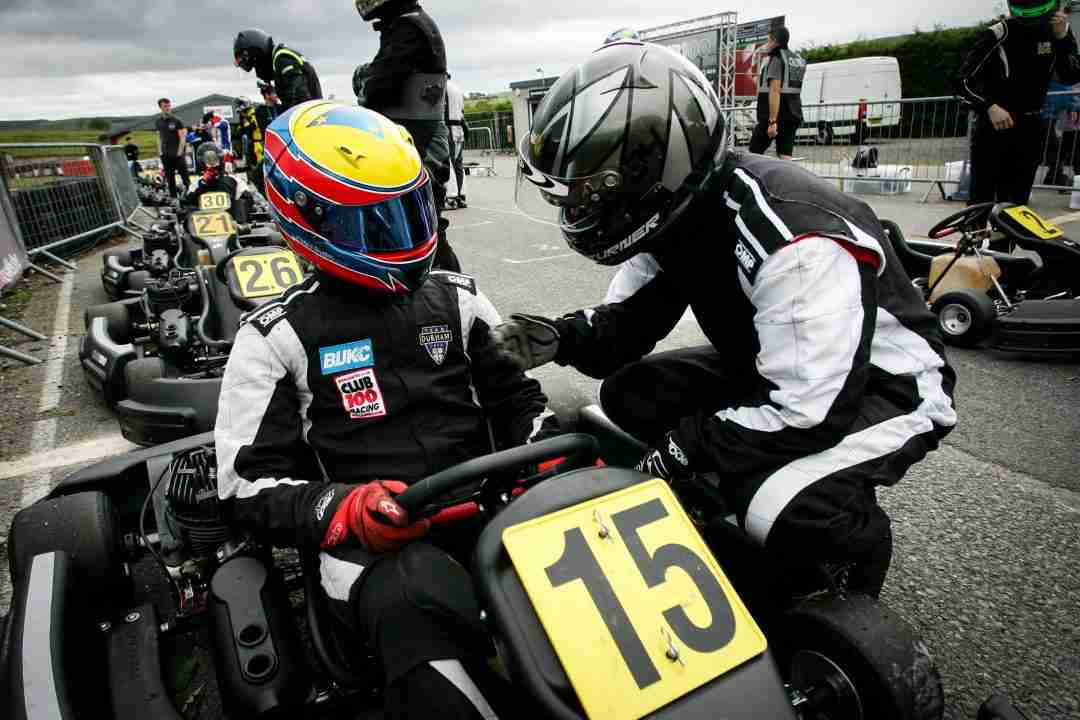 Heat 1 A guesting Mark Turner on pole from Andrew Dawson with another guest driver in the form of Tim Hill and Clubman’s regular Stefan Scully alongside. Jonathan McLeod and David Whitehouse on row three from Mathew Bell and Mark Ridout alongside each other on row four. Luke Hornsby and Stuart Osborn completed the top ten. Turner led the field up to the line but was a little hesitant as the pace Kart pulled off to the right of the circuit. He lost out badly as the field streamed up the Dragon straight and would be down to sixth by the end of the lap. And it would get worse. Scully was at the front with Dawson second from Whitehouse and Hill whilst McLeod was running in a very creditable fifth but with Frankie Hedges and Simon Lloyd closing having started from grids eleven and twelve respectively. Scully continued to edge away at the front as Dawson hung onto second from Whitehouse and Hill. Lloyd found a way round McLeod at the top of the hill and began to close in on the frontrunners whilst McLeod would gradually slip down the order. 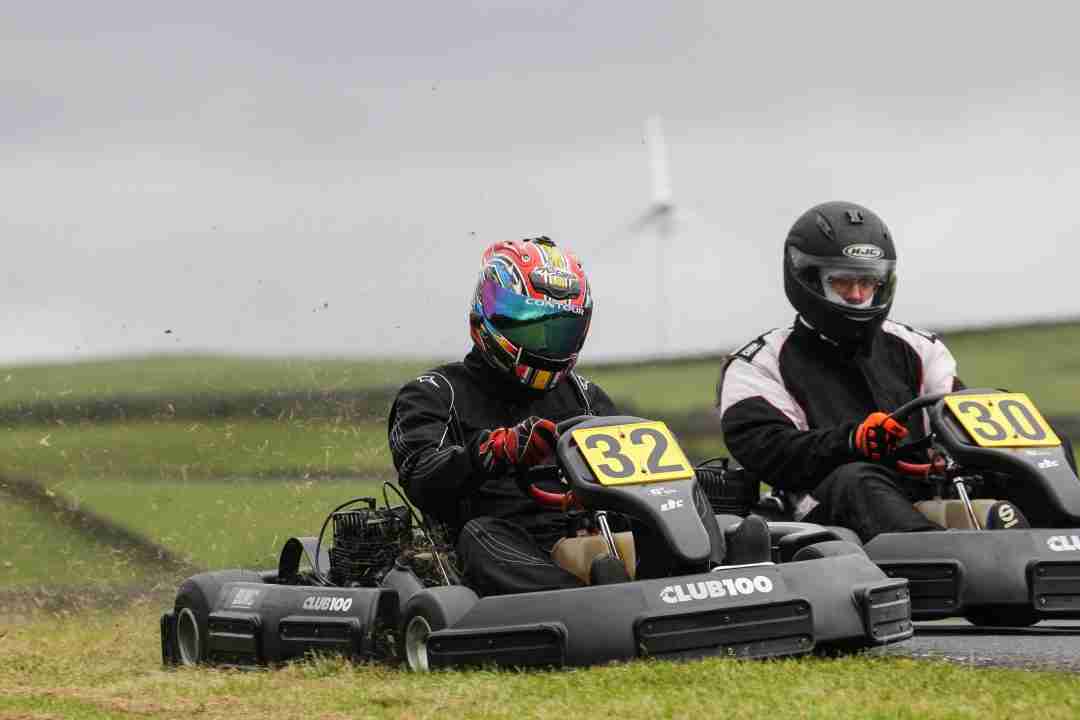 Mid race and Hill was up to third but carrying a penalty for exceeding track limits. Liam Cochrane moved into the top ten having started on grid seventeen. Scully continued at the front, controlling the gap with ease back to Dawson who was still running second from Hill. Lloyd was up to fourth and with two to run he made it third as Hill fell back to fifth behind Whitehouse. Cochrane too was closing in on the leading bunch pursued by James Taylor. He’d made up nine places on the opening lap before settling down and running just a few lengths behind Cochrane. Scully maintained the gap at the front right till the flag taking the win by just over a second from Dawson, Lloyd, Whitehouse and Hill. Hill though would be deducted six places for persistently exceeding track limits and dropped out of the top ten. Cochrane was classified fifth and set the fastest lap on the penultimate tour with Taylor next. Hedges, Miguel Hall, Darrell Lowe and Jon Watkins completed the top ten. Heat 2 Watkins on pole from Christopher Powell with Martin Theodorou and Cochrane on row two. Next up, Lowe and Stephen Westwood from James Martin and Ben Cottle with James Taylor and Paul Williams completing the top ten. And what a well behaved heat this was. At least at the front. Watkins led the field away from the line with Powell slotting in behind ahead of Cochrane with Theodorou fourth from Lowe, Westwood and Martin. Cottle spun to the back of the field with Taylor, Williams and Paul Jennings completing the top ten runners. 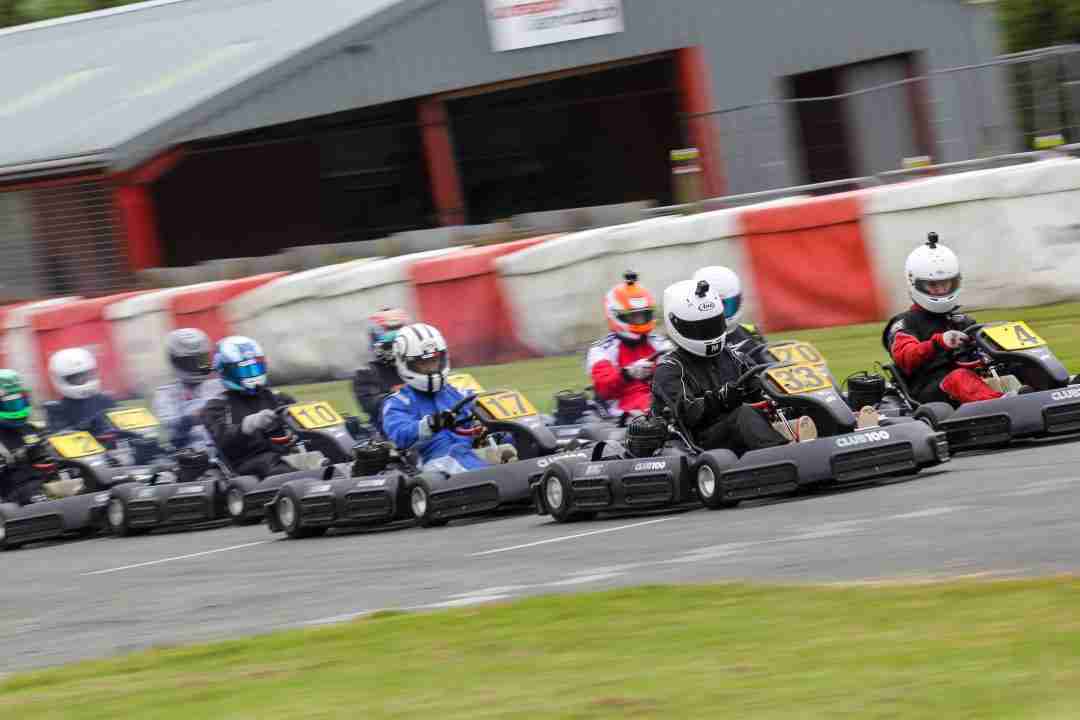 Two laps run and Theodorou spun down the order but fortunately close to one of the pushers who quickly had him on his way. He was down to twelfth though and would ultimately slip further down the order. Watkins continued to lead but Cochrane was into second ahead of Powell whilst Martin slipped by Westwood for fifth. And apart from Taylor getting by Westwood with three laps to go the order remained static with Watkins taking a lights to flag win just over a tenth up on Cochrane who set the fastest lap for the second heat in a row on the penultimate tour. These two were well clear of Powell who did well to hold off a very determined Lowe over the final few laps. Martin too was closing in but he had to settle for fifth. Taylor was a lonely sixth with Westwood and Dawson next up from Jennings and Sammy Venables. McLeod and Whitehouse were both excluded from the results. Both for the same offence. Causing a driver to come to a halt. Bit of a surprise as neither driver is noted for particularly aggressive driving. Heat 3 Hall on pole from Venables for the final heat with Lloyd and Chris Scivier on row two. Row three saw Hedges and Jennings alongside one another with Osborn and Williams next. Hornsby and Taylor completed the first five rows. Hall got away cleanly from pole but Lloyd got the better of Venables to slot into second with Venables third and holding off Scivier and Hedges. Behind these Jennings and Osborn got a little too close on the straight with Jennings spinning to a halt and delaying both Osborn and Taylor. This little incident allowed Hornsby to move up to challenge Williams. At the front Hall continued to lead pursued by Lloyd and Venables. Hedges moved ahead of Scivier and Hornsby got by Williams going up the hill. 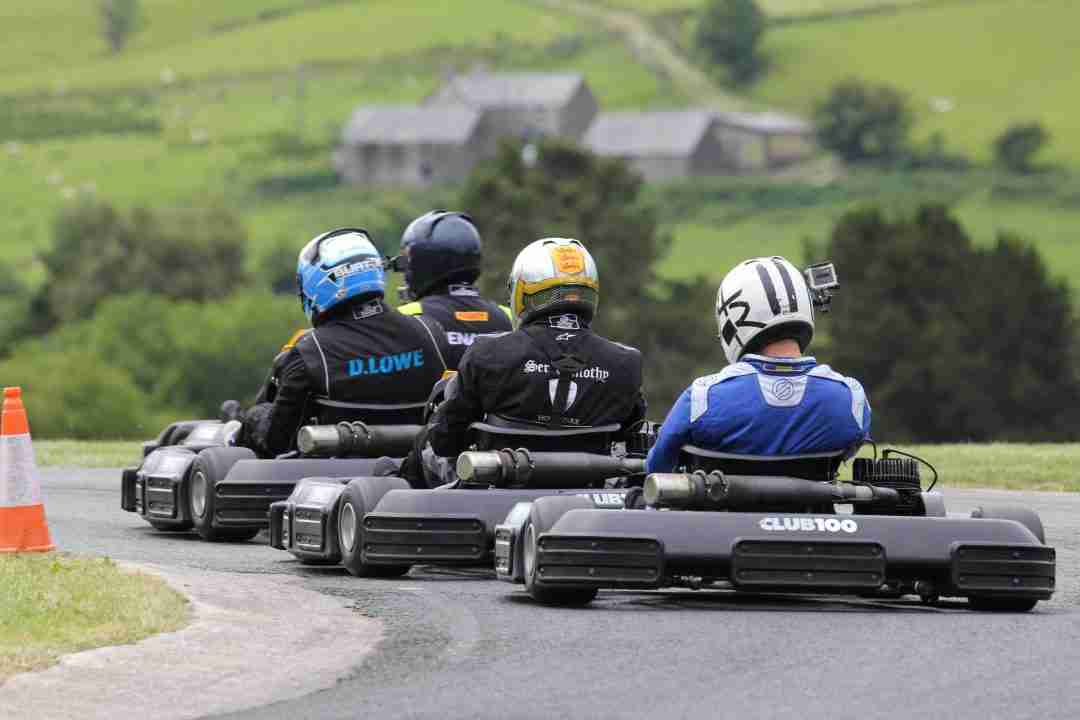 Hornsby was really flying at this stage and clearly had a very quick machine. Hall still led but Lloyd couldn’t hold off Venables who moved ahead at half distance. A lap later he was at the front and pulling clear. Hornsby continued to move forward sweeping by Lloyd up the hill and into fourth. And he wasn’t done. Venables continued to pull clear from Hall whilst Hedges was now having to defend from the clearly quicker Hornsby. With three to go Hornsby drafted by into third and immediately began to home in on Hall in second. Penultimate lap and he closed in rapidly going up the hill. Hall offered no defence and Hornsby was through. Venables though wasn’t going to be caught and took the win almost three seconds clear of the flying Hornsby with Hall third. Taylor was next up. Having been delayed on the first lap and dropping to eleventh he made steady progress as he fought his way back almost unnoticed. Fourth was a touch fortunate as he benefited from Hedges taking a one place penalty for cone abuse dropping him to fifth ahead of Lloyd with Mark Ridout seventh ahead of Scivier, Martin and Scully. 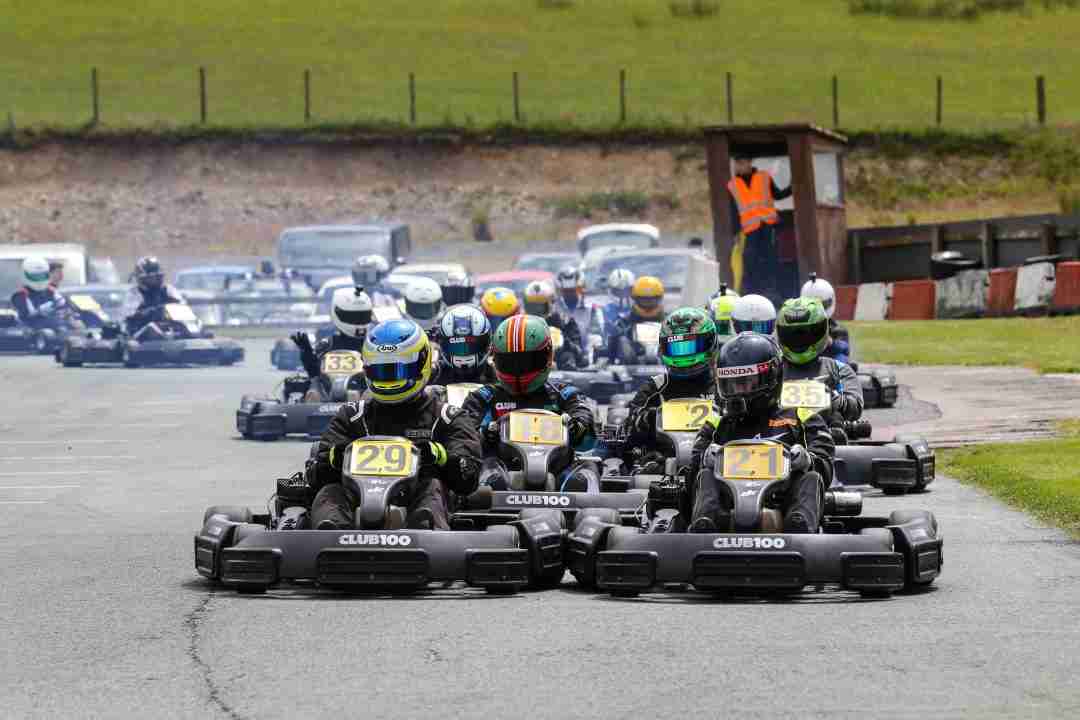 Final Pole for Taylor who was hoping to make it three wins from three outing this season. Scully was alongside with Lloyd and Martin on row two. Next up, Lowe and Hall with Dawson and Cochrane on row four. Watkins and Venables completed the top ten. Taylor made a clean start from pole to lead up the hill but as they turned into the right hander Scully ran wide and lost momentum. He was down to eighth by the end of the lap. Lloyd was into second from Martin and Lowe with Cochrane next chased by Hall, Dawson, Scully and Watkins. With two laps run Taylor was stretching his lead but only by a couple of Kart lengths. Lowe had moved by Lloyd for second with Cochrane into fourth from Martin and Venables. Behind these, Hall, Watkins and Dawson were locked in battle. Down into the Carousel Dawson saw a gap and went for it. Too late, he realised he was on too tight a line. Contact was made and both Hall and Watkins came to a halt whilst Dawson managed to keep going but would be excluded post race. Hornsby took advantage to move himself into seventh. Taylor continued at the front pursued by Lowe with Cochrane into third from Martin, Venables and Hornsby. Cochrane began to close in on Lowe and at half distance he attacked into the Carousel. Both drivers hung on with Lowe on the outside and rapidly running out of road. He was on the grass on the exit of the corner but managed to keep control. Both drivers had differing views as the rights and wrongs of the move at the end of the race but after a period of calm they had an amicable exchange of views. Respect to both of them. Taylor now had Cochrane closing him down and began to defend. It allowed Cochrane to get closer and at two thirds distance he made a move round the outside at the top of the hill. 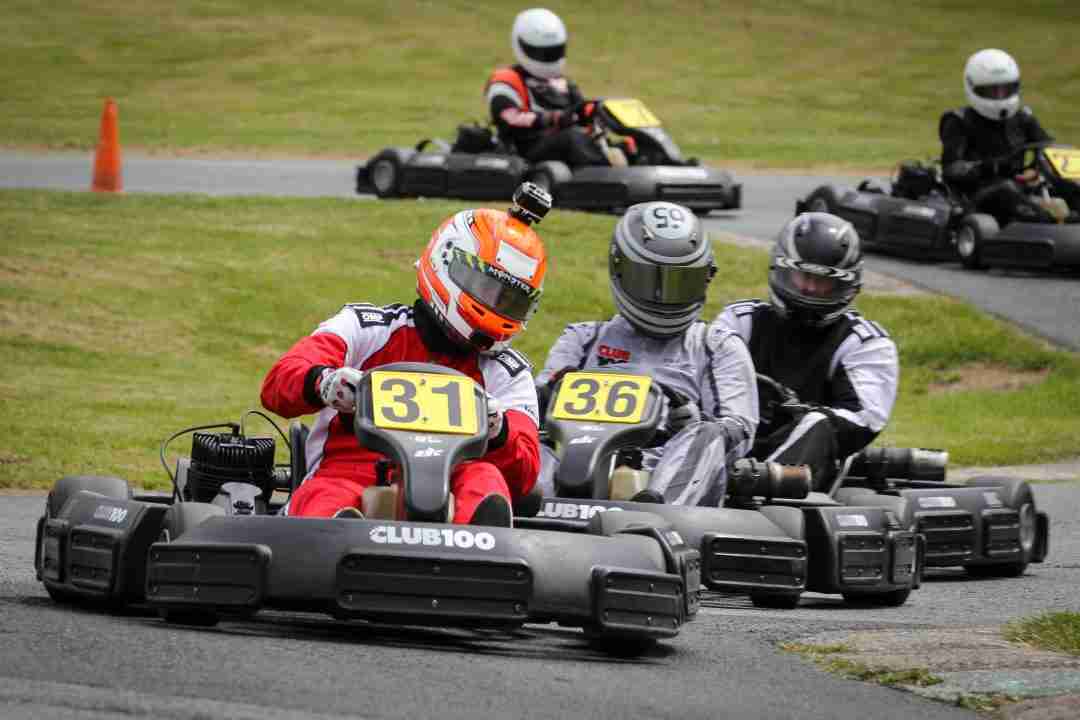 Taylor gave him room but Cochrane had the better line down the hill and moved into the lead. And Lowe was still a factor. Lloyd moved ahead of Martin for fourth and was well placed to profit should anything befall the leaders. But Cochrane was keeping everything tidy at the front and as they crossed the line for the start of the final lap he looked to have the race won. But at the top of the hill he inexplicably left the door open. Taylor didn’t need asking twice and dived up the inside into the lead. Cochrane tried to respond but Taylor defended and kept everything tidy as they came down the hill. Lowe pressured Cochrane for second forcing him to defend and Taylor crossed the line for the win. And didn’t he love it. Great to see drivers punching the air and showing some emotion. 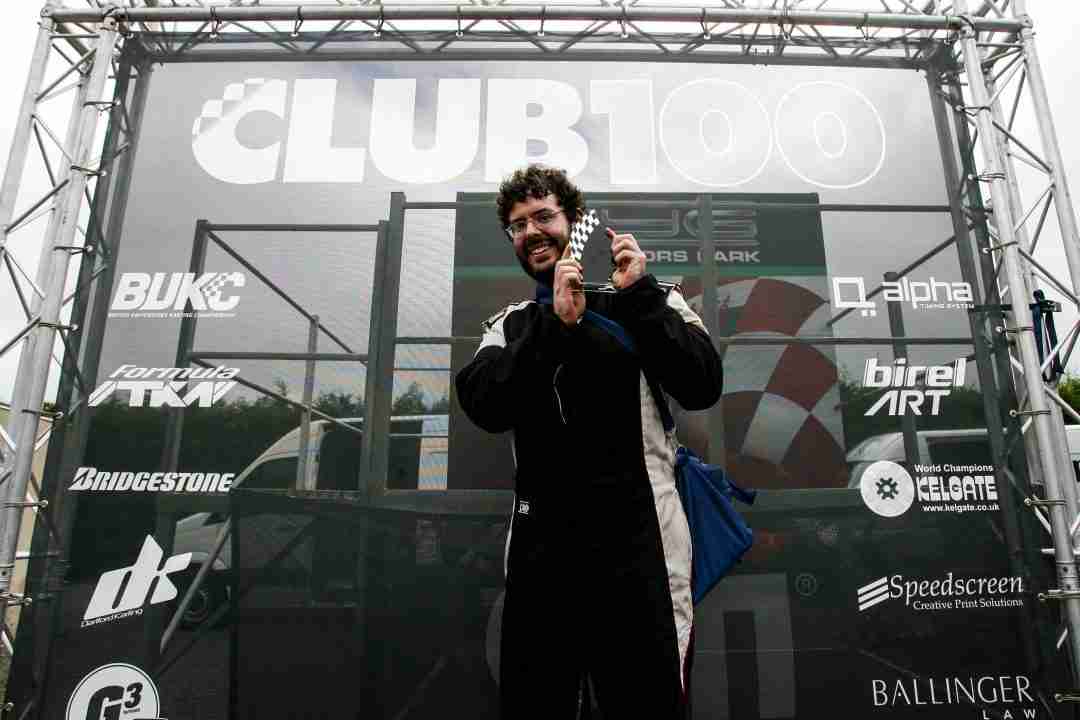 Cochrane crossed the line a tenth up on Lowe with Lloyd a few lengths back in fourth. Martin was fifth with Hornsby taking his second consecutive sixth place finish from the last two events. Jennings was seventh after a very strong drive with Venables next from Scully and Whitehouse. Round Up. In the Clubman’s, James Taylor’s third win of the season from three starts out of five puts him at the top of the order. His victory at GYG was hard earned. Stephen Jennings is second with David Whitehouse third. Not his greatest day at GYG after two strong rounds recently. Stefan Scully is fourth from Darrell Lowe. 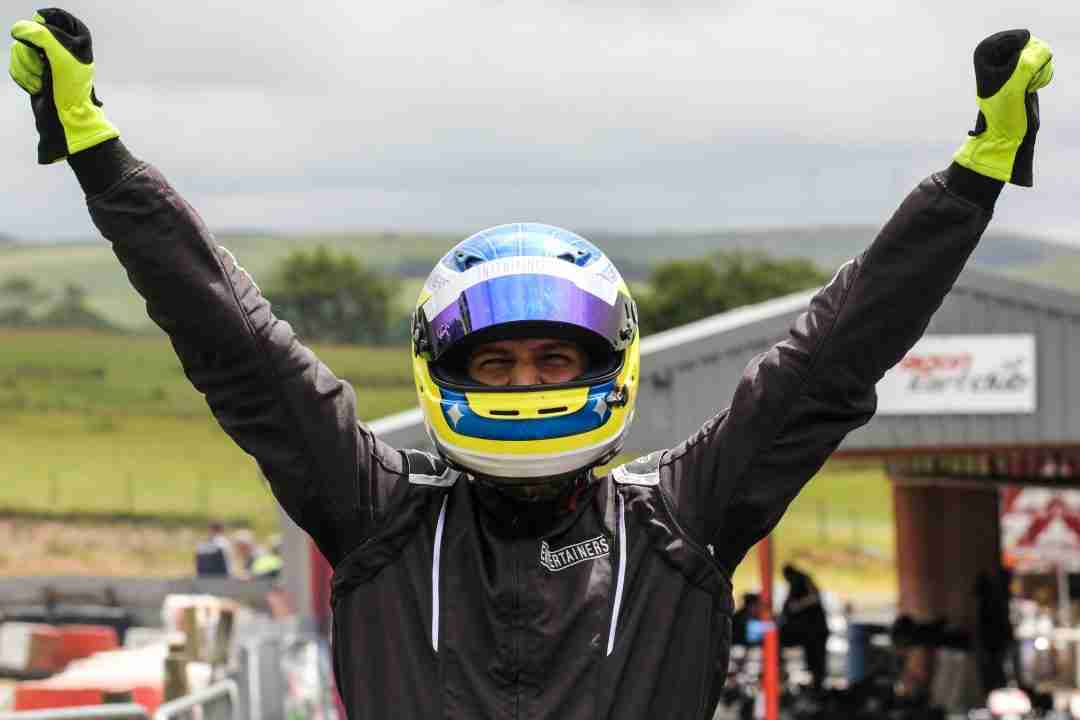 Reflections Always a great day at GYG even when it’s wet!. Such a shame that more drivers don’t want to make what is admittedly a long journey for some. It’s well worth the trip though because it is such a fabulous circuit. Still, JV did do his best to keep the grids full and everyone I spoke too thought the special offer on entry fees was a great imitative. And no one lost out in the respective Championships. Speaking of which, just for a bit of fun and unofficially I’ve revised the scoring for the EssexFlatPack runners. Scoring F1 style doesn’t change the order but it does tighten the field. Trevor Randall 104 Paul Williams 89 Stuart Germon 63 Jordan Salter 61 Paul Goddard 48 Kieran Chidgzey 42 James Edwards 35 Just a bit of fun but if nothing else it makes Trevor a bit less of a runaway leader! Finally, all our officials fulfil their duties with honesty and integrity. There are no favourites and no favours. So it was a little disappointing to see one or two drivers storming into race control to have a moan. I know emotions can run high but prima donna behaviour won’t get you anywhere. Count to ten and then approach the right official calmly if you have a beef. Club100 is not a branch of Mothercare. Whatever the circumstance acting like a spoilt brat just causes a loss of respect. See you at Buckmore.
Scroll to Top
We use cookies to ensure that we give you the best experience on our website. If you continue to use this site we will assume that you are happy with it.OkPrivacy policy