Into the afternoon the weather remained breezy but dry for the Lightweights, Heavyweights and the EssexFlatPack sponsored Super Heavyweights (SHW). Qualifying Stuart Jones topped the screens early on and looked to have done enough to stay top of group 1 but he was beaten by Craig Brown and Steve Bosley. Brown set his best time on his second to last lap whilst Bosley left it till his final attempt. Martin Gurnett was fourth, another driver to leave it till his final lap whilst series sponsor Stuart Germon was the quickest of the EssexFlatPack SHW runners in a very creditable fifth place overall. 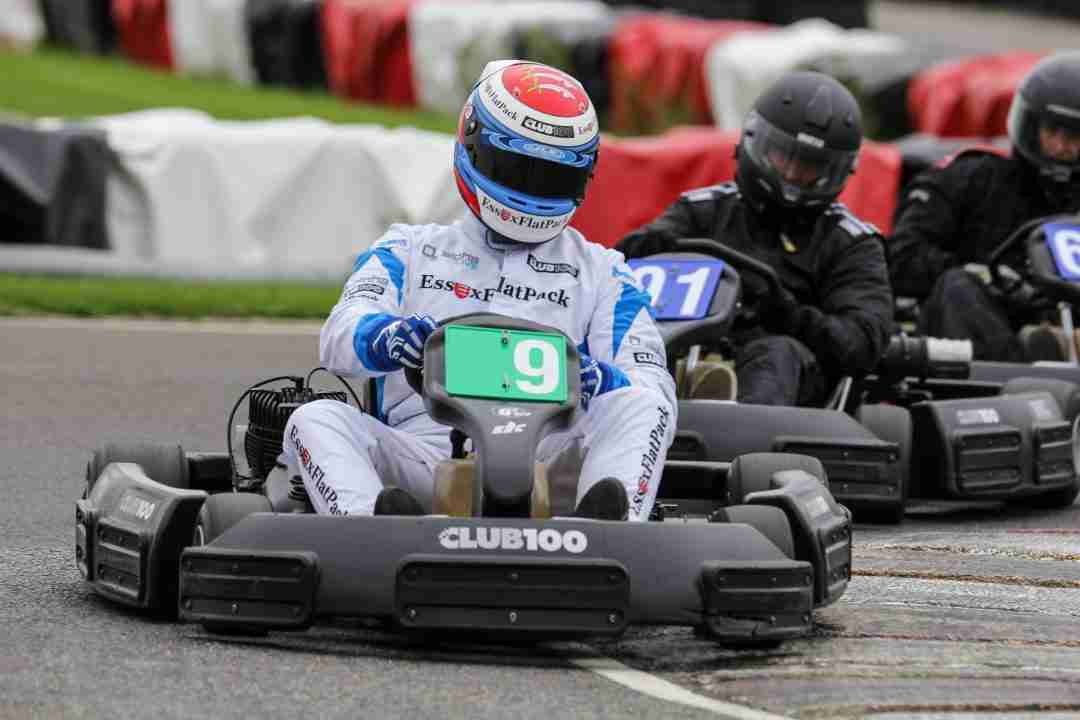 Dan Taylor and Ben Benneyworth went quickest on their first flying laps in group 2 before Nick Trafford briefly went quickest. Most eyes were on Championship leader Tim Hill whose qualifying form has been imperious of late but he could only manage sixth quickest. Meanwhile Seb Algieri went quickest with 44.747 which had most watchers eyes on stalks. But if they thought that was quick he then posted a 44.473 on his penultimate lap to head the session by over three tenths from Trafford. Aaron Stevens was third just 0.002 shy of Trafford with Benneyworth and Taylor next. Trevor Randall was the quickest SHW. HW/SHW Pre B Final SHW Paul Williams on pole for this one with Lennie Wood alongside and Robert Stapleton and Michael Ballinger on row two. Ben Johnson and Stephen Netting shared row three with Jack Brudenell on four and SHW Pete Gillett and Jeremy Deeks on row five. Just four to qualify for the pre A Final. 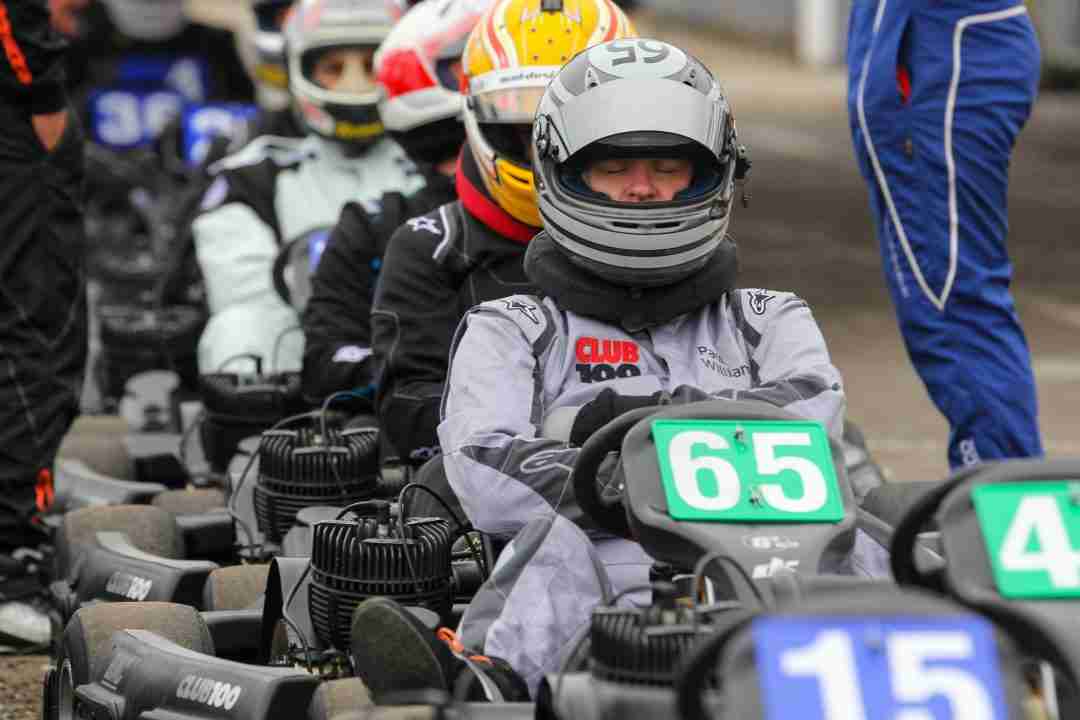 Williams led the field away with Wood second. Ballinger got the better of Stapleton as did a fast starting Netting who slotted in to fourth. A lap later he moved into third ahead of Ballinger with Johnson fifth and pressing Ballinger for the final qualifying spot. Four laps in and Wood moved ahead of Williams for the lead. Williams didn’t defend knowing second was good enough. Netting though was intent on moving forward and slipped by Williams for second. Two laps later and Ballinger moved ahead of Williams for third but Williams was still just about safe in fourth as the battle for fifth raged between Stapleton, Johnson and Brudenell. Wood took the win by just a couple of tenths from the flying Netting who also set the fastest lap. Wood’s joy was short lived as he was demoted a couple of places for exceeding track limits promoting Netting into first with Ballinger second and Williams fourth. HW/SHW Pre A Final Algieri on pole from Brown with Trafford and Stevens on row two. Bosley and Jones on row three from Gurnett and Benneyworth whilst Taylor and Championship leader Hill shared row five. 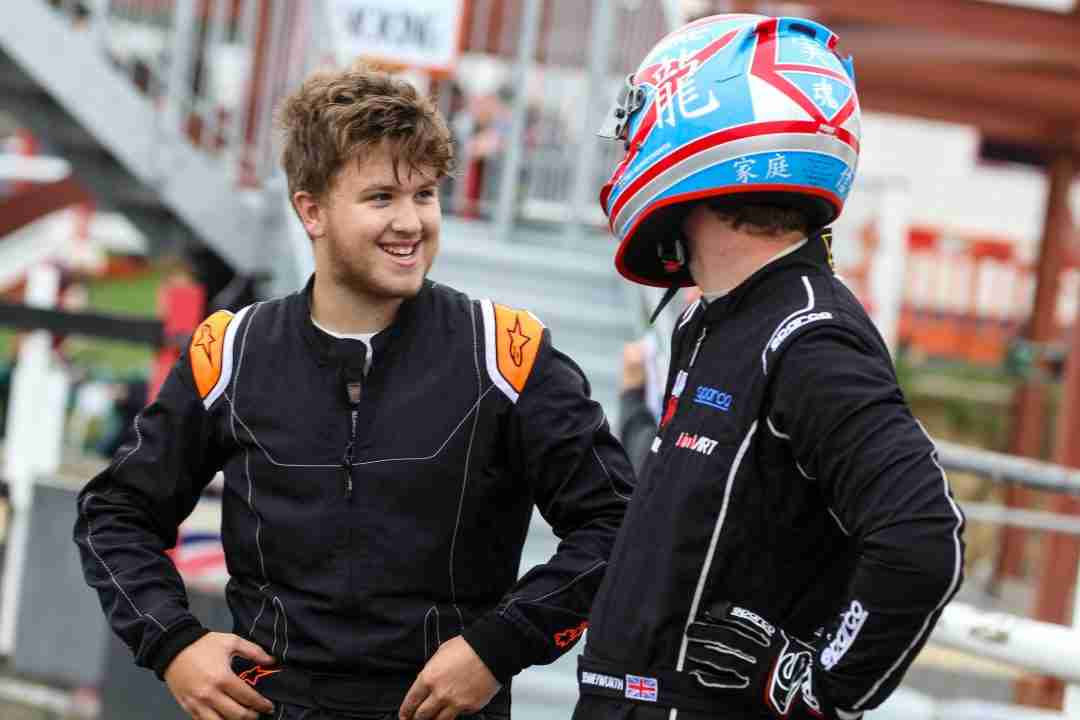 Algieri led the field away with Brown next but by the end of the lap Trafford had taken over in second place but over a second behind the flying leader. Stevens ran fourth behind Brown with Jones next from a fast starting Taylor. Bosley dropped a couple of spots to run seventh ahead of Gurnett and Benneyworth whilst Hill remained tenth. Algieri continued to pull clear at the front as Trafford and Brown squabbled over second. Two laps in and Brown was back into third only for Trafford to snatch the place back. Jones and Taylor both slipped by Stevens for fourth and fifth with Bosley still seventh. Down the order, SHW Paul Goddard spun to a halt the victim of an attack by Ben Cottle which didn’t work out as he intended. His day would get worse as he picked up more penalties for exceeding track limits. Down the order Miguel Hall was on the move moving up from grid sixteen to ninth. It was not without drama however as he had picked up a penalty for exceeding track limits. 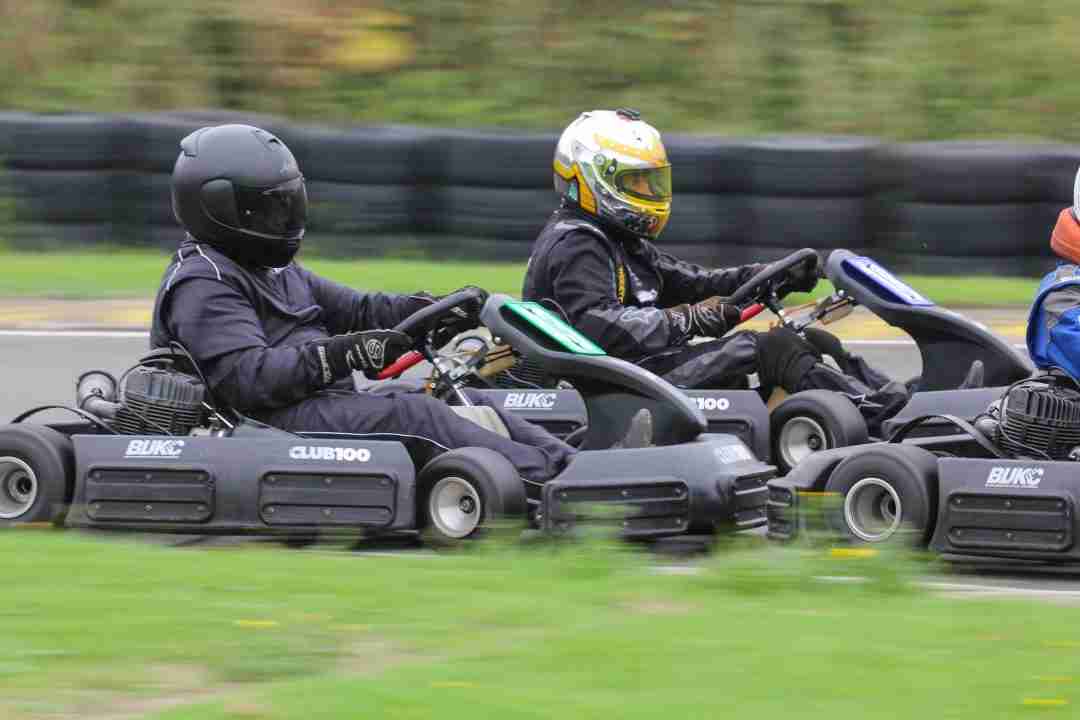 Bosley meanwhile had dropped to eighth and as he and Hall disputed the same piece of tarmac in the final turns Bosley spun to a halt. Hall was rightly penalised and after all his penalties were applied he dropped from eighth to eighteenth. The front three remained static for all but the first three laps with Algieri taking the win and setting the fastest lap on the penultimate tour. Trafford took second well clear of Brown in third who had Jones closing in over the final laps. Taylor took fifth with Hill sixth after a sensible run. Stevens was next ahead of Hall whose demotion promoted Mike Bodnar into eighth ahead of Mark Turner. Trevor Randall was the leading SHW in tenth with Germon second in the class from Williams. Randall also set the fastest lap in the SHW class. HW/SHW B Final Pole for Nima Oparver from Rob Stapleton with Ben Johnson and Elliott Sampayo on row two. Next up Jack Brudenell and Jeremy Deeks followed by Jack Hollingsworth and SHW runner Andrew Clarke. Jaeden Cadogan and Kelly Rogers shared the fifth row from Andrew Mcsherry and Pete Gillett on six with Andrew Griffiths bringing up the rear. This wasn’t the greatest of starts as Oparver spun away his chances along with Johnson all of which allowed a grateful Brudenell to cross the line at the end of the lap chased by Deeks and Clarke. 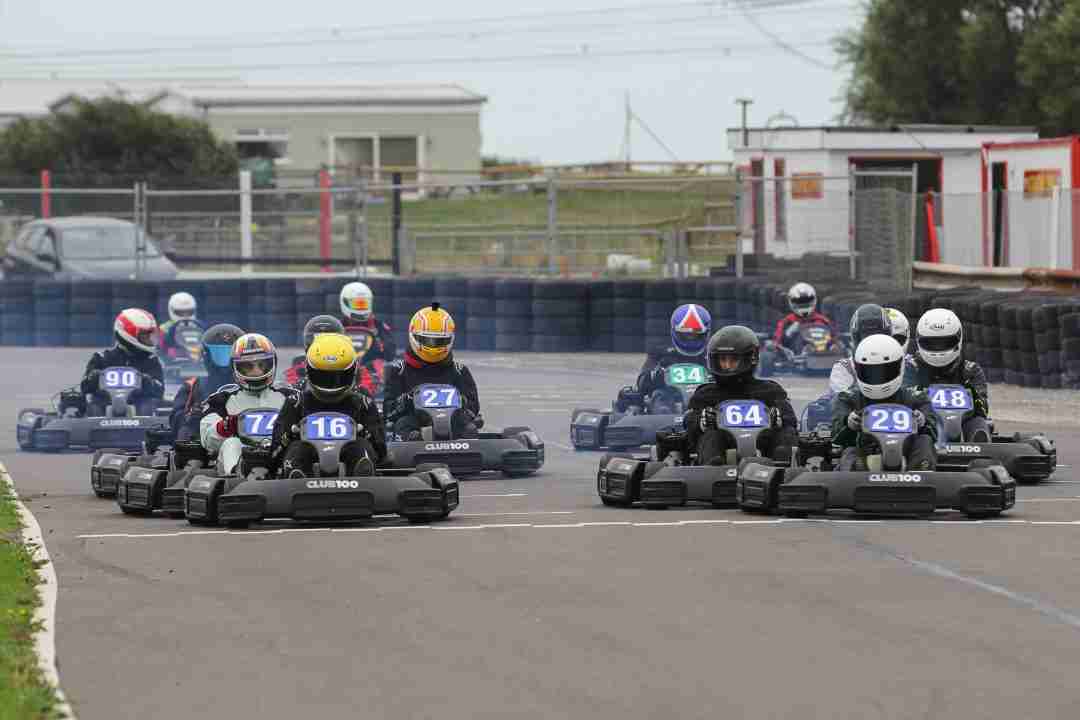 Stapleton ran fourth ahead of Sampayo. Three laps in and Brudenell was pulling rapidly clear at the front with Stapleton back into second from Sampayo, Clarke and Deeks. Brudenell continued to pull clear of the field with Stapleton still running second. Clarke had fought back to third as Sampayo and Deeks fought over fourth. Deeks picked up a penalty in his fight with Sampayo. Sampayo got his head down and once clear of Deeks he set about closing the gap on Clarke. It didn’t take long and he moved himself up to third. With Brudenell long gone the race was all about second as both Stapleton and Sampayo pulled clear of the rest of the field. Sampayo closed the gap and set the fastest lap of the race three from home but he couldn’t get close enough to mount a challenge. 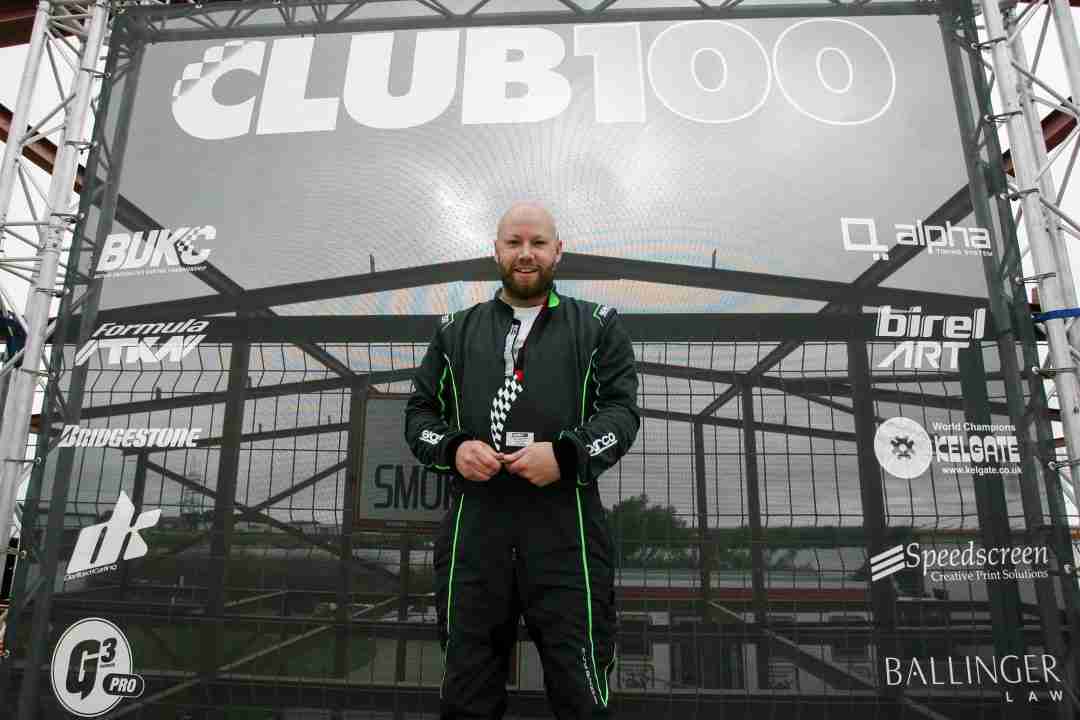 Brudenell crossed the line over six seconds clear of Stapleton to take the win and qualify for the A Final. Or had he? Sadly for him he was found to be underweight and excluded from the results handing the win to Stapleton, and the B Final trophy, with Sampayo taking the second qualifying spot. HW/SHW A Final Algieri on pole from Trafford with Brown and Jones sharing the second row. Taylor and Hill shared row three with Stevens and Bodnar on four. Turner and the first of the EssexFlatPack runners Randall completed the first five rows. Algieri brought the pack round to the start, floored the throttle and immediately pulled clear of fellow front row sitter Trafford. 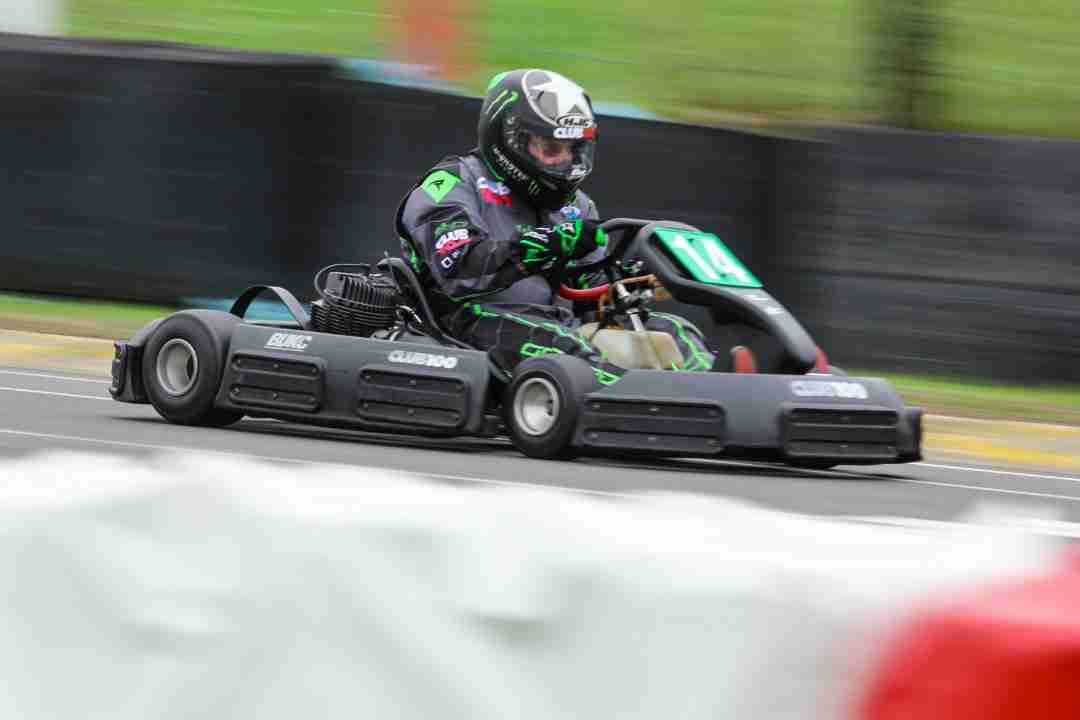 By the end of the lap he was half a second up the road and visibly pulling away. Trafford remained second with Brown third from Jones, Taylor, Hill and Stevens. Turner got the better of Bodnar to run eighth with Randall tenth. Three laps in and it was as you were at the front with the leader still pulling away from the battle for second. Taylor found a way by Jones for third whilst the order down to tenth remained static. Trafford was coming under increasing pressure from Brown and the latter finally got by at the end of the back straight. A lap later and Jones was back into fourth and closing in on Trafford. Down the back straight he moved to the left as Trafford moved right to defend. Trafford looked to his right; saw Taylor coming but too far back to a threat so he moved left to take his line for the corner. Jones briefly took to the grass in avoidance shooting mud into the air. But he held it together. I doubt that Trafford even knew he was there. And I mean no disrespect to him. A lap later and Jones took over in third, again with a move down the inside into the final turns. 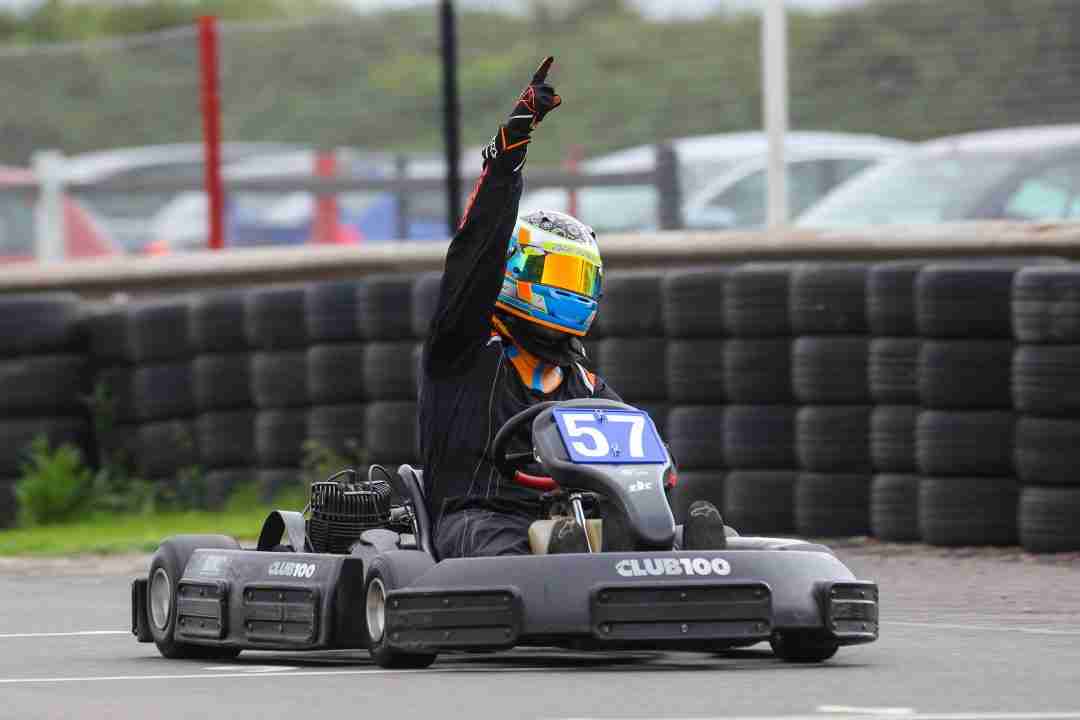 By this point Algieri was over three seconds clear at the front and well in command. Thereafter he slackened his pace, glancing back just once a lap to check on his rivals. He controlled the gap to perfection, a very impressive display. He would eventually cross the line still well over a second clear for his second win of the day. Brown continued to chase hard but could never get on terms whilst third placed Jones steadily pulled clear of fourth placed Taylor in what became a procession over the latter stages. Hill was briefly up to fifth as Trafford continued to slip down the order. Stevens took both Hill and Trafford in the space of a lap to hold fifth but only for a lap as Hill fought back. Trafford now had Turner closing in along with Bodnar, Randall and Gurnett. It all got a bit messy through the first turn with Trafford getting forced wide and emerging in eleventh. And there he stayed till the flag, cutting a disconsolate figure in the pit lane post race. Hill took fifth with Stevens sixth from Turner and Bodnar. Randall was next and first in the EssexFlatPack SHW class whilst Gurnett completed the top ten. Round up Seb Algieri’s great day at Lydd sees him regain the Championship lead from Tim Hill. But it’s oh so close. Whilst Seb was at the top of his game Tim put in two solid if unspectacular drives. Damage limitation was the order of the day. Nick Trafford lies third but is losing ground with Stuart Jones next and closing in on Trafford. Ben Bennyworth lies fifth. 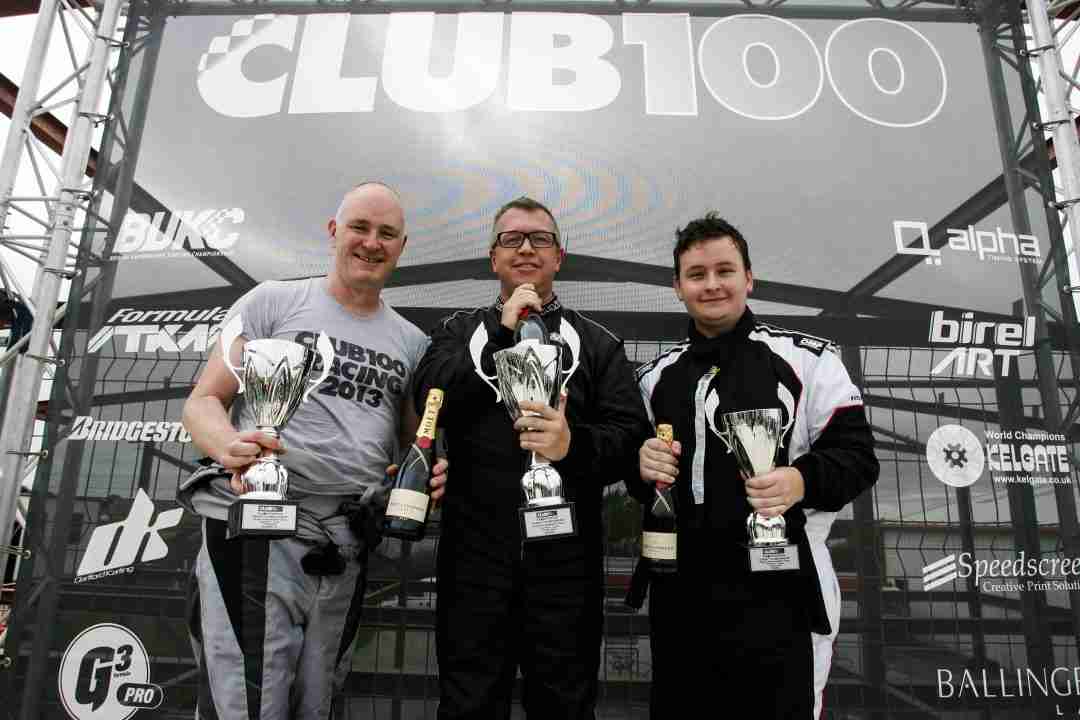 In the EssexFlatPack SHW class Trevor Randall took yet another class win with Paul Williams second from Jordan Salter. And not only did the three podium sitters get trophies but they all had a bottle of Moet too. Great generosity from series sponsor Stuart Germon. He didn’t have the best of days despite qualifying well. He picked up a penalty in the A Final for forcing Lennie Wood to a halt and was classified last. But as always, or almost always, he was all smiles at the end. And a special mention to the irrepressible Paul Goddard who qualified straight into the Pre A Final. Reflections Another great days racing at Lydd. Yet again however there were several instances of drivers not heeding yellow flags. The rule is simple. When you see a yellow, raise your arm and back off. To not do so could have dangerous consequences not just for drivers but for the officials as well. I witnessed this on the approach into the first turn. It’s a quick corner and from a kart you have no idea what’s round it. And we still saw drivers weaving ferociously before the start. It actually caused a delay as a couple of drivers couldn’t get through quick enough to take up their grid positions. It’s in the regulations and one day the rule might just get applied. There was also a suggestion that a driver was adjusting the jets on his machines carb. And it appears to have some merit as it wasn’t just one driver complaining. It’s against the rules and the spirit of the Club and is something which is going to be watched for at the next round. You have been warned. 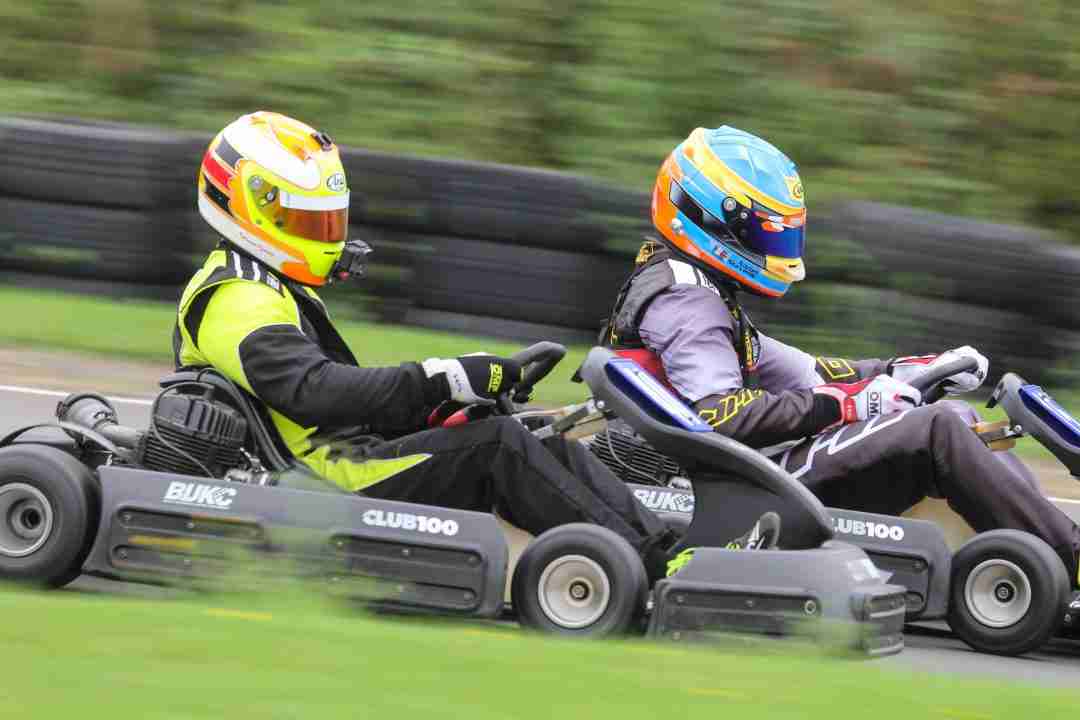